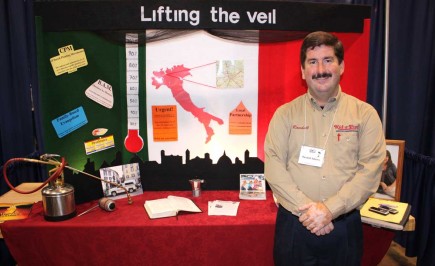 Erik Tryggestad
ARLINGTON, Texas — Randall Adams’ exhibit looked similar to many others at last summer’s Global Missions Conference. A laminated map pointed to where he and his family hope to live — northern Italy. A hand-drawn thermometer showed how much of their financial goal they had raised — a humble 20 percent.
But next to a Bible opened to Romans was an industrial sprayer. And Adams’ shirt didn’t bear a ministry logo or a cross. It said “Rid-a-Pest, servizio disinfestazione.” That’s Italian for “extermination service.”
Adams, a member of the Mount Comfort church in Fayetteville, Ark., plans to move his family to Vicenza, Italy, and help spark a church-planting movement there.
But he’s not applying for a religious visa. (“That’s too normal!” he quipped in his fundraising brochure.) He plans to launch an extermination business, ridding Italian homes of mice, roaches and other household pests.
After moving to Italy and setting up the business, Adams estimates he can support his family by working two or three days per week. “Hopefully, we won’t need support (beyond) three years,” he said.
sBut even start-up funds have been difficult to raise in the current economy, he said. In addition, some potential supporters “believe strongly that either you work as a ‘missionary’ or you work a ‘secular’ job.”
Titus Robison is doing both.
Robison, the son of missionaries, grew up in Italy and moved to Vicenza with his family in February. He splits his time between the 130-member Vicenza church, where he works with youth and young families, and his secular job as consultant for a clothing company owned by church members.
Employment in Italy does more than defray the country’s high cost of living, Robison said.
“Having a job here opens doors,” he said. “When you tell Europeans you are a missionary, they quickly turn the other way.
“But if you tell them you are working and start building a friendship … then you are able to change that person’s life — hopefully for Christ.”
The same is true in the U.S., said Adams, who worked as a church planter in Delaware before becoming an exterminator with Rid-a-Pest in Arkansas three years ago. The relationships he’s built with his clients have provided him opportunities to share his faith.
“I’ve been able to do more ministry work as a bug guy than I ever could as a full-time minister,” Adams said.
FOR MORE INFORMATION, see www.ridapestitalia.biz and www.titusrobison.com.