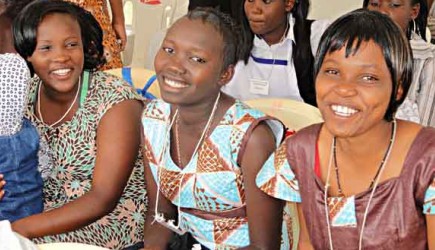 Erik Tryggestad
The proprietor of an upscale salon in this African capital was the guest of honor at a church-supported ministry’s 15th anniversary celebration.
Nargis Manji, who operates Nairobi’s Narcisse Salon, has hired and trained six former street children in the art of hairdressing, manicure and pedicure.
She even sent a few of them to a special training program overseen by cosmetics giant Revlon.
The trainees are among the hundreds of Kenyan youths helped by the Made in the Streets ministry in the past 15 years. The Eastleigh Church of Christ in Nairobi launched the ministry in 1995. Today the ministry has a staff of 24 ministers and volunteers. Charles and Darlene Coulston oversee the work, with assistance from Larry and Hollye Conway.
The ministry operates a facility in the Eastleigh neighborhood that houses street girls with newborn babies. Team members work at sites across the city, administering first aid, helping children get national identity cards and conducting Bible studies. More than 50 children live in the ministry’s facility in Kamulu, 45 minutes from Eastleigh.
In the years since the ministry was founded, Kenyan Christians have played an increasing role in its oversight. Francis Mbuvi, who was himself a street youth when the Coulstons met him in 1994, now serves as the program’s administrator.
RELATED BLOG POST: A fashionable celebration in Kenya