Kentucky church member escapes school shooting — but not the trauma

'We know that God is our only hope in finding any comfort or peace in a time like now,' says Pamela Ross, a Benton Church of Christ member.

“Pamela, please text me back.”

By the time the rampage ended, two students were dead, and 13 were riddled with bullets, Kentucky State Police said. Five other victims — all teens — were hurt as students ran for their lives.

But for half an hour, the messages to Ross, a senior at Marshall County High and a lifelong member of the Benton Church of Christ, went unanswered.

“I had an MRI at 8, or I would have been there,” said Ross, who faces possible neck surgery as the result of a 2016 car wreck. “I had no clue about anything until I got out and got dressed.

“My mom (Susan) looked at me with tears in her eyes and said, ‘There’s been a shooting.’ I said, ‘What?’ I couldn’t process it. … Then she handed me my phone, and I opened it, and I had like 500 messages and missed calls.”

The reality of what had happened sank in, and Ross (no relation to this writer) broke down. “And it hasn’t been the same since,” she told The Christian Chronicle. “It won’t be the same for a very, very long time.”

This morning, as she shared her thoughts with the Chronicle, she said: “It still doesn’t seem real. I talk about it to people like I know that it happened. But when I sit and think about it, I don’t believe it. Benton was voted the No. 1 place to raise your kids in Kentucky, and now we will be remembered for this.

“We always learned about Columbine High School,” she added, referring to the 1999 Colorado massacre in which 12 students and one teacher died, “but you never think it could happen to you. That’s what makes it so unreal to us. We are like Columbine now.” 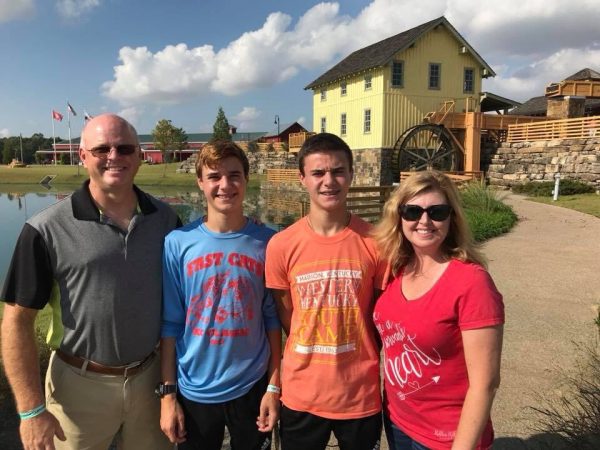 Christian and Mason Cosner, pictured with stepfather Brad and mother Christa, were among the victims of Tuesday’s mass shooting in Benton, Ky.

This past Sunday, the youth group from the Benton church — including Ross, her best friend Sydney Temple and twins Mason and Christian Cosner — enjoyed a fun trip to a youth rally hosted by the Glendale Road Church of Christ in Murray, Ky.

The 16-year-old Cosner brothers were among the victims in Tuesday’s shooting.

Pamela Ross took to Twitter to ask for prayers for Mason Cosner, who was flown to Vanderbilt University Medical Center in Nashville in critical condition.

Mason Cosner, who is a victim of this tragedy, is being airlifted to vanderbilt for surgery. his jaw is shattered and the bullet is in his neck he will have surgery at Vanderbilt. prayers for him please. the update is from his mom.

“Mason is off the ventilator and breathing on his own,” Ross said this morning. “Today he’s going to have his jaw wired shut. He’s not out of the woods. He is still in critical condition.”

But by this afternoon, Mason Cosner’s prognosis was looking much better, Ross reported: “Mason has seriously had a miraculous recovery. He’s heading home soon.”

Christian Cosner, meanwhile, suffered bruised ribs when he stopped to wrap the leg of another shooting victim, Ross said. He was taken to a local hospital. “Christian had X-rays, and nothing is broken,” his friend said. 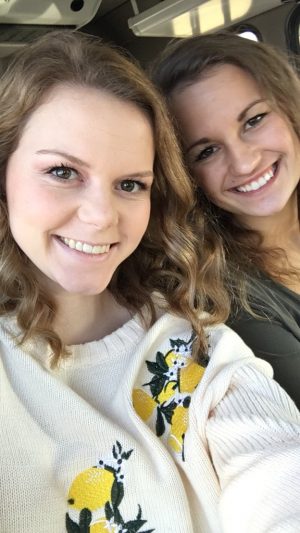 Pamela Ross, left, with her best friend Sydney Temple on the bus to a youth rally Sunday.

Authorities took a 15-year-old male suspect into custody at the school and plan to charge him with two counts of murder and multiple counts of attempted murder, Kentucky State Police Commissioner Rick Sanders said. Ross said she does not know the suspect personally but had “seen him around.” Police have not identified the suspect.

As she reflects on the tragedy, Ross stresses this: “We need prayers.”

In a note to the Chronicle, she said:

There are no comforting words that people can tell us to truly help us and comfort us. We know that God is our only hope in finding any comfort or peace in a time like now.

We know the prayers for Mason are helping so much; we have seen that. We know God is the only one who can help us in this time.

And in times like this, you realize your life can be over so fast at any time. Life’s too short to worry about silly stuff or be mad at people and not be kind. We all just need prayers — students, faculty, our families, and definitely the injured and the families of the ones who didn’t make it.

But we also need to pray for the shooter and his family. My heart breaks for his mom. She came up to the school along with so many other parents, freaking out, wanting to know if her child was OK, not knowing that her child was the reason.

The shooter needs prayers. What he did is absolutely awful, and you can’t justify it to make it OK at all. But he is still a child of God, and he obviously needs God very badly in his life. So, we just have to pray that he will find God, even though his life is definitely over as in ever being a normal citizen again.

He will probably never be free again, so he just needs to have a heart full of God. We all do.