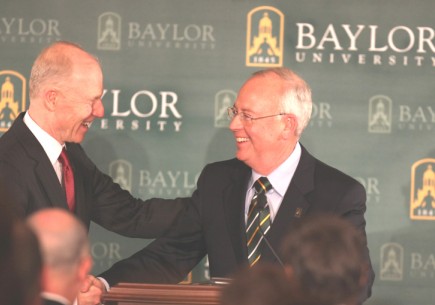 Bobby Ross Jr.
After his 2004 hiring as dean of the law school at Pepperdine University in Malibu, Calif., Kenneth Starr voiced his thankfulness “to be worshiping again in the Churches of Christ.”
But after his recent appointment as president of Baylor University in Waco, Texas, Starr expressed his “great sense of kinship and fellowship” with Baptists and said he intends to join a Baptist church.
Starr, 63, the former independent counsel best known for his investigations into the administration and conduct of former President Bill Clinton, will begin his tenure as Baylor’s 14th president June 1.
“Judge Starr is familiar with Baylor’s Baptist history and tradition and offered to join a Baptist church if he accepted the position,” said Lori Fogleman, a Baylor spokeswoman.
Baylor, the world’s largest Baptist university with 14,000 students, created a stir in Baptist circles when it tapped a new president with Church of Christ roots.
“It’s at least ironic,” wrote David Wilkinson, executive director for Associated Baptist Press. “Out of 105 million Baptists worldwide, Baylor’s presidential-search committee and board of regents could not find a solitary soul deemed worthy of occupying the executive’s office in Waco.”
Starr, a regular weekly attendee of the University Church of Christ while at Pepperdine, grew up the son of a Church of Christ minister in Texas and Oklahoma. His father, Willie, studied for two years at Freed-Hardeman University in Henderson, Tenn. The younger Starr began his college career at Harding University in Searcy, Ark., before transferring to George Washington University in Washington, D.C.
While at George Washington, Starr worshiped with the 16th and Decatur Church of Christ and taught the high school Sunday class, he told The Christian Chronicle in a 2004 interview.
“As the years went on, I moved into evangelical Christianity,” Starr told the Chronicle. “I worshiped for many years at the McLean, Va., Bible church. Now, we are worshiping at the University church on Pepperdine’s campus, which we love. I am thankful to be worshiping again in the Churches of Christ.”
But in an interview with The Baptist Standard after accepting the Baylor job, Starr said he began having questions about age 18 about certain Church of Christ practices, including the lack of instrumental music. He said the McLean Bible Church, where he was active from 1978 to 2004, continued to capture his attention and remained his “home congregation” after he left Washington.
“I’m comfortable with the articulation of Baptist distinctives — including the role of baptism,” Starr told the Standard, which noted that Churches of Christ, unlike Baptists, teach that baptism is essential for salvation. Starr also told the Baptist paper, “I feel a great sense of kinship and fellowship with the Baptist community.”
Andrew K. Benton, Pepperdine’s president, thanked Starr for his service to the law school and university and congratulated him on his Baylor appointment.
“Ken has had a tremendous impact on our students, the law school and the Pepperdine community at large,” Benton said in a statement. “His leadership, his love of scholarship and his devotion to our students helped raise the national stature of our school.”
Benton said a national search for Starr’s replacement will begin soon.
Provost Darryl Tippens said Pepperdine’s reputation among law schools has risen in recent years.
“From working closely with our faculty and mentoring our students to hosting luminaries on campus and arguing prominent cases, Dean Starr’s energy and enthusiasm have been inspiring,” Tippens said.