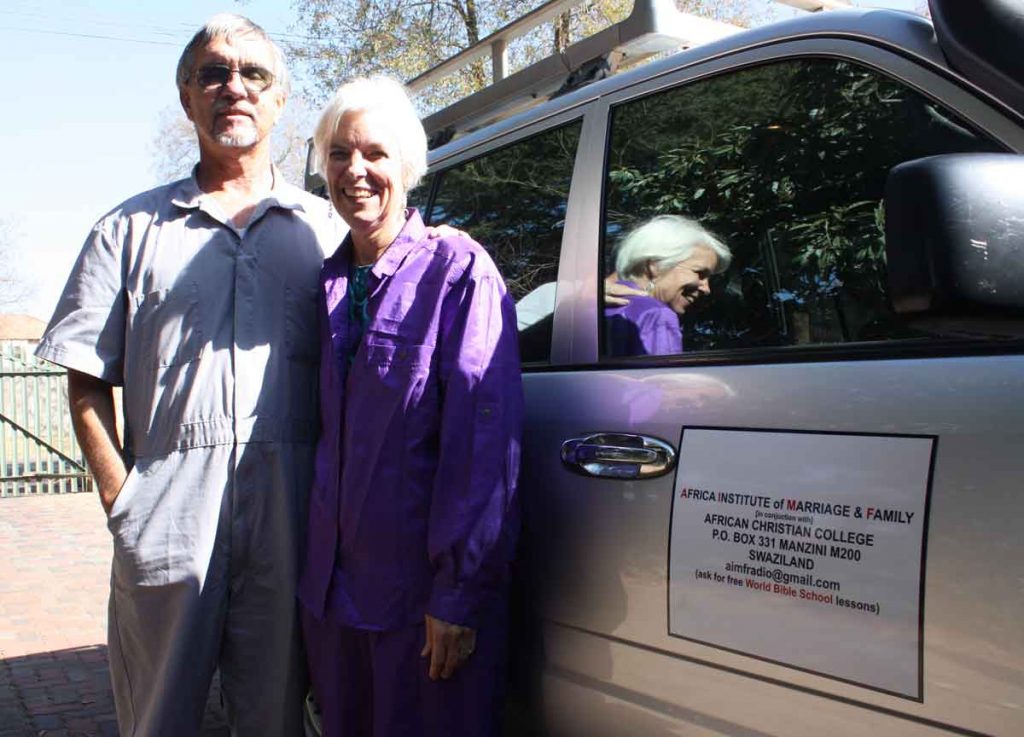 Keeping up with the Allisons — and mysterious goat meat 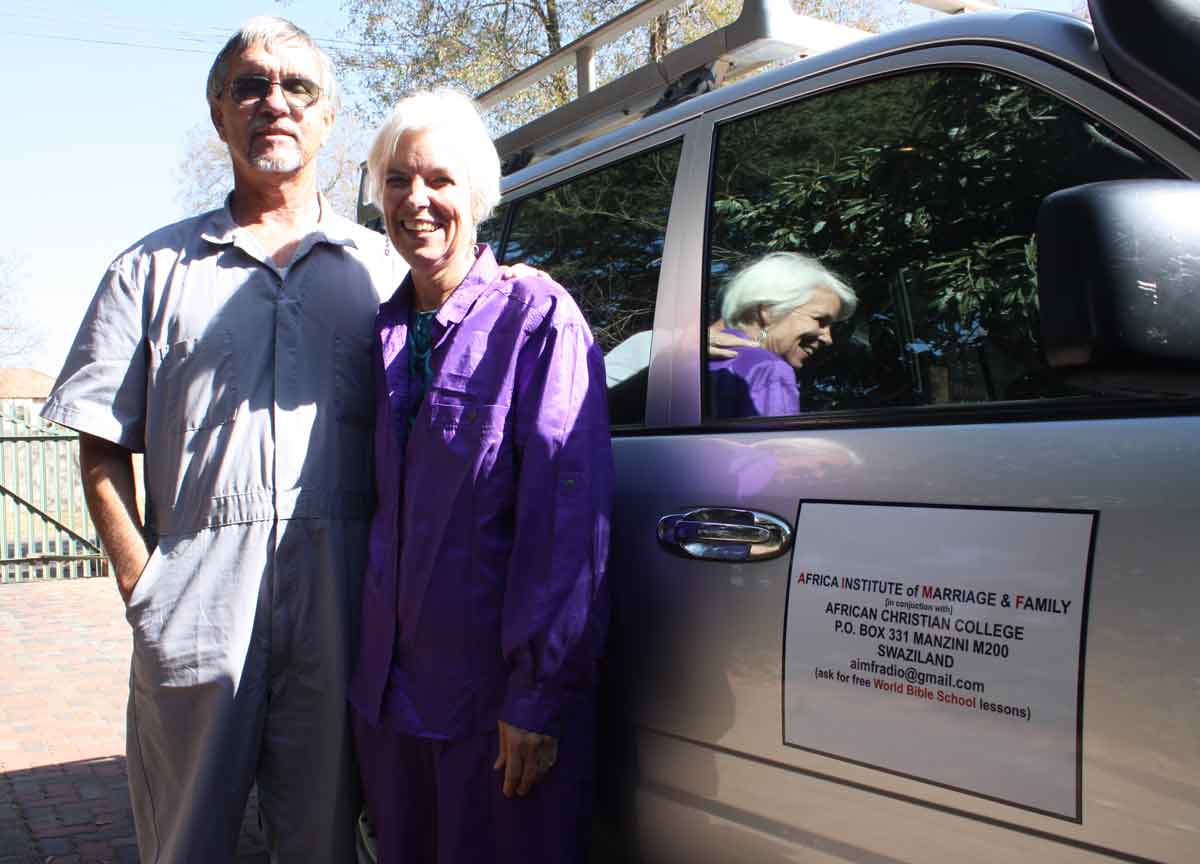 Fielden and Janet Allison stand next to their truck, bearing the name of their marriage ministry, in Benoni, South Africa. (Photo by Erik Tryggestad)

We just posted my feature on Fielden and Janet Allison, longtime missionaries in Africa who tour the continent with their Africa Institute of Marriage & Family ministry. Here’s a snippet, in which the Allisons discuss the genesis of the ministry:

The Allisons have lived in Africa for 38 years, helping Christians train leaders and plant congregations. They raised five children on African soil. Two now serve as missionaries in Mozambique and Cambodia.
In 1984, while working among the Kipsigis of western Kenya, four young men approached the Allisons for help. They wanted to marry Christian girls who had not undergone female circumcision, a painful ritual practiced by the tribe’s animists.
The young men’s parents claimed the Christian girls would not get pregnant — and not bear sons. Bibles in hand, the Allisons counseled and prayed with the young men.
“Interestingly, all four girls got pregnant the first year” of their marriages, Fielden Allison said, “and all four of them had sons.” A few of the young men’s parents converted to Christianity.

I spent nearly five hours with the Allisons between African Christian College in Swaziland and the home of Chris Burke in Benoni, South Africa (mentioned in a previous blog post). Their marriage ministry is unlike anything you’ll find among Churches of Christ in Africa, I’m guessing. The feature made a nice addition to our ongoing Global South series.
One funny note about the trip: I recorded about 45 minutes of my conversation with the Allisons in the truck. Lynda Sheehan, one of our administrative assistants here at The Christian Chronicle, transcribed the interview before I wrote the story. Lynda did a great job — and didn’t miss a single detail.
Here’s an excerpt from the transcript:

Erik: Now, remind me how you got hooked up with African Christian College here. How did that come about?
Fielden: We have known Ira Hill for 30 … how many years? Early 70s, actually. Probably 35 years now we’ve known Ira and June. They’ve supported our ministry for all those years. And when he got hooked with ACC …
Janet: Well, even further. The church where he was an elder was our overseeing congregation for many years.
Erik: Oh really?
Janet: Yeah.
Fielden: Are you ready for some goat meat? May get some here. Anyway, when he became chairman of the board, they were looking for qualified people to come and teach. …

I honestly have no recollection of eating goat meat on that trip. 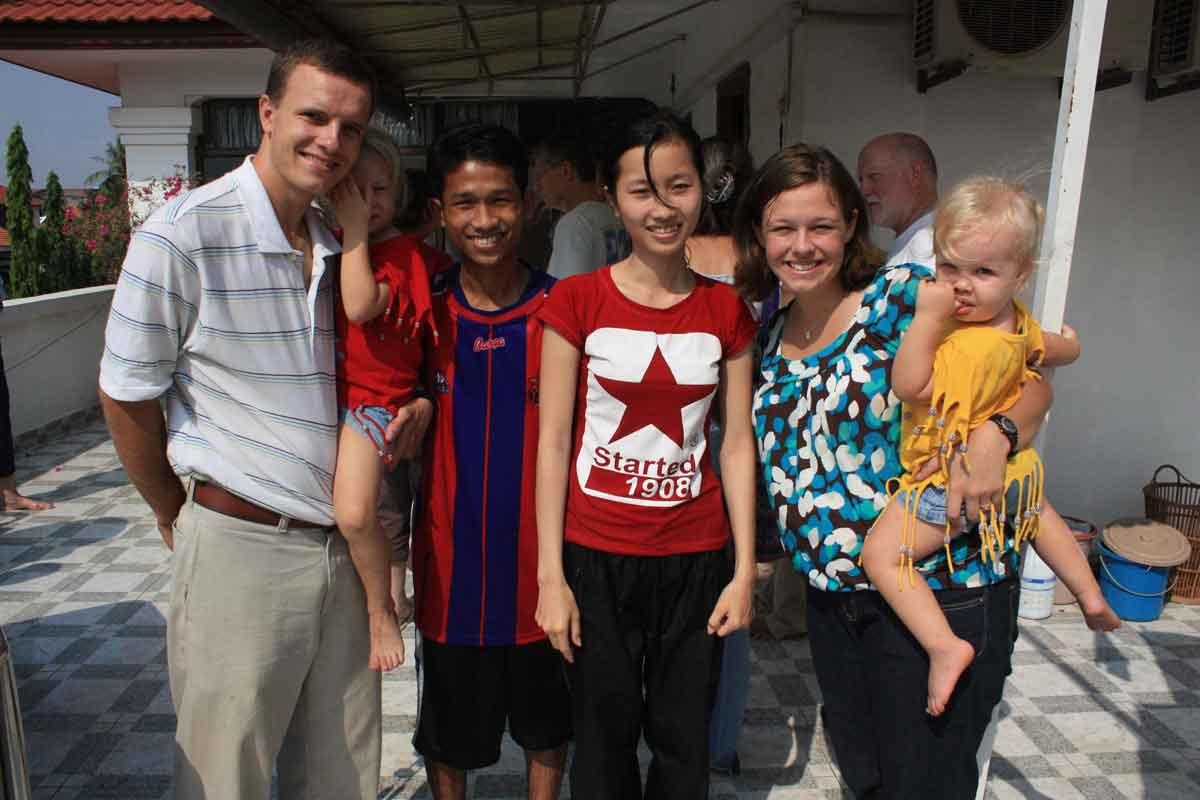 I met the Allisons’ son and daughter-in-law, Chris and Casey Allison, earlier this year on an entirely different continent. I was reporting on Churches of Christ in Southeast Asia — also for the Global South series — and caught up with the younger Allisons in Cambodia.  You can catch a glimpse of Chris, Casey and their kids in the opening shot of this video about the work in the Phnom Penh area:
httpv://www.youtube.com/watch?v=JbImPRhwY5Q&feature=player_embedded