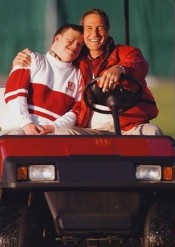 John Mark Stallings remembered as genuine, selfless friend to many

“He just had agenuine impact on people, really because he cared,” his sister,Laurie Vanderpool of Brentwood, Tenn., told The Dallas Morning News. “He would focus in on the peoplefor who they were and what they were doing for him. He didn’t careabout their success or their status.”

In February 2001, John Markwas one of the first four people to be presented a “Change the World” Awardfrom ACU. ACU President Royce Money made thepresentation to John Mark during Lectureship in February 2001, at the timenoting the impact of a life lived with Down Syndrome.

“As a young man with Down syndrome, Johnny has been a shining light oflove and joy to his family and friends, professional football players, fans andnational viewing audiences,” Money said at the time. “Whether he was with hisdad in a United Way TV ad, serving as the most excited fan on the sidelines orjust demonstrating great determination in every task, Johnny has changed theworld of everyone he has met.”

Johnny Stallings has touched lives in many circles,Money said then. For years, he washis dad’s greatest fan and the players’ favorite person as Gene Stallingscoached at the University of Alabama, Texas A&M, the Dallas Cowboys and thePhoenix Cardinals.

John Mark was born June 11, 1962, in Tuscaloosa,Ala., and later in his life was the subject of a biography of his life, Another Season, written by his fatherand Sally Cook. He received anhonorary high school diploma from Dallas Christian High School before receivingthe “Change the World” award from ACU.

Memorials may be made to the R.I.S.E.program, at Stallings Center, The University of Alabama, Tuscaloosa, AL 35487;The Juvenile Diabetes Research Foundation, 9400 North Central Expressway, Suite1201, Dallas, TX 75231; or to the Lamar Avenue Church of Christ Youth Program,3535 Lamar Avenue, Paris, TX 75460.