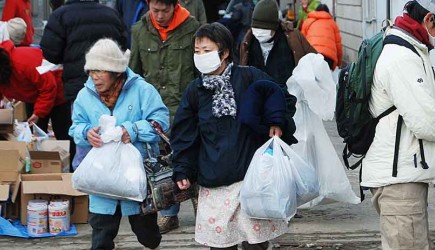 Erik Tryggestad
Why should Christians in the United States send money across an ocean to help a wealthy nation recover from a natural disaster?
To put it simply, “No country could absorb a disaster like this,” said Jonathan Straker, a master’s student in missions at Abilene Christian University in Texas.
Straker and his wife, Michiko, served for five years as missionaries in Sendai, the nearest major city to the epicenter of the 9.0-magnitude earthquake that struck Japan on March 11.
“Sendai is my second hometown,” said Michiko Straker, a native of Japan’s northern island, Hokkaido.
The tsunami that followed the quake flooded the Sendai airport and devastated its coastal communities. At press time, the disaster had claimed an estimated 11,000 lives in eastern Japan. An additional 17,000 were missing, and hundreds of thousands were homeless.
In the weeks following the quake, aftershocks were common, and daily news stories and rumors emerged about water, spinach and other essentials contaminated with radiation from the Fukushima nuclear plant, damaged in the quake.
“It will take more than 10 years for us to rebuild the victimized areas — with several years’ worth of entire national  budgets,” said Motoyuki Nomura, minister for the Kaiko Koizumi Church of Christ.
Like many Japanese Christians, Nomura has received multiple questions about the quake from church members in the West.
“Hundreds of gracious, love- and prayer-filled e-mails have come to my computer for 10 days,” Nomura said. He also has received multiple phone calls — some in the middle of the night.
“I am frankly worn out in answering these gracious … inquiries,” he said.
CHURCH MEMBERS MOURN LOSSES
Immediately after the quake, Jonathan Straker launched a Facebook group, “Working and Praying for Japan earthquake victims,” to help Christians on both sides of the Pacific Ocean stay up-to-date on developments in Japan. The group has more than 1,800 members.
The former missionary also launched a website, www.workingandprayingforjapan.org, to help coordinate relief.
At press time, no members of Japan’s Churches of Christ were reported among the dead, Jonathan Straker said. Three churches — Sendai, Morioka and Hachinohe — meet in areas hardest hit by the disaster, but the handful of families that comprise those congregations is safe.
One member of the Sendai congregation lost her best friend — a mother of two children — when the tsunami swept her home out to sea, he said. The children, ages 2 and 4, also perished.
“I couldn’t stop crying and wanted to remember my friend’s face clearly because I will never meet her again,” the Sendai church member said in a message to the Strakers, “and I want to believe she is in the heaven where there is no sadness or pain.”
CHRISTIAN UNIVERSITY DAMAGED
Jim Batten was tilling his garden when the quake hit.
“The big one lasted for around five minutes — the longest five minutes in my life,” Batten said. “I was only 30 steps away from the house, but it seemed it took 30 minutes to get there.”
Batten, a member of the Omika Church of Christ, has spent much of his life in Japan, where he serves as chancellor of Ibaraki Christian University. The university was founded in 1948 by a group that included church members.
The quake shattered windows and cracked brick walls on Ibaraki’s campus, Batten said. The students were away on spring break.
“We are just now coming to terms with what has been and is happening,” Batten said, “and starting to think beyond our own changed world.”
MISSIONARIES RELOCATED

Paul and Stacey Herrington, members of the Northside Church of Christ in Wichita, Kan., are working as missionary interns with minister Shiro Obata and the congregation he serves in Haruna, Japan.
The Herringtons were driving to the Tokyo airport to pick up Kent Hartman when the earthquake began. Hartman, missionary in residence at Oklahoma Christian University, was flying to Japan for a supervisory visit. His plane was scheduled to land about one hour after the quake.
Hartman spent nearly 31 hours on the plane, as pilots waited for clearance to disembark.
“If there is one thing you learn in missions … you must be flexible,” Hartman said.
Stacey Herrington is seven months pregnant. Due to concerns about radiation, Hartman helped the couple relocate to southern Japan.
THE WORK AHEAD
As Churches of Christ in Japan and the U.S. begin relief efforts, Jonathan Straker prays that Christians in both nations will view the work as a long-term project.
He also prays that relief will be given “in a way that empowers the local church and doesn’t burden them.” Japan’s church members, who number less than 1,200, face a huge task in the days ahead, he said.
The Mito Church of Christ, in Japan’s Ibaraki prefecture, is one of the largest congregations in the country. Its members are coordinating relief.
“Ibaraki is also one of the disaster areas,” Mito minister Atsushi Tsuneki said, “and we, Mito, and other churches, are in a process of a slow recovery to normal life.”
The Park Avenue Church of Christ in Memphis, Tenn., has collected more than $90,000 for Japan relief. Dwight Albright, a former missionary to Japan, is coordinating the effort.
Nashville, Tenn.-based Healing Hands International is working with the Mito church to distribute aid to people near the quake zone.
Matt Huddleston, a member of the Cordova Church of Christ in Rancho Cordova, Calif., traveled to Japan to help coordinate the effort.
“After two weeks without electricity and water, these people were so thankful for the little things that I take for granted — clean and dry socks, fresh vegetables, clean water, a warm bed,” Huddleston said. “Thank you for all who are helping to keep this supply line working.”