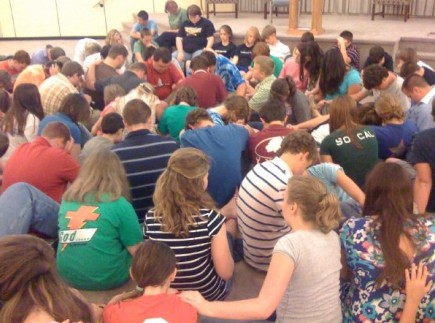 Joy McMillon
Blustery winds, icy streets and heavy winter coats make summer seem far away — unless you are an excited teenager, hoping to get into the T.I.T.U.S. Camp in Florence, Ala.

Across the South, dozens of teens huddled together for New Year’s Eve watch parties because at midnight on Dec. 31, they finally could submit their applications.
They don’t have much time: Openings for the girls are filled by the end of January, and the boys’ slots for the July camp are filled soon after.
In its fourth year, T.I.T.U.S. Camp — or Teens in Training for Useful Experience — has grown from 15 campers to 70, all 13-19 years old.
Located on the Heritage Christian University campus in Florence, the eight-day experience is uniquely tailored to equip young people for preaching, teaching, Christian service and ministry. Many come from Alabama, Mississippi, Kentucky and Tennessee.
Campers spend a large portion of their week in serious study.  Each morning they take Homiletics — sermon writing and delivery classes — for two hours and spend almost that much time in the library.  Staff members, mostly youth ministers, help them flesh out their subjects and polish presentations.
Despite the homework and rigorous dress guidelines —dress shirts and ties for the guys and dresses for ladies during the first half of the day — the popular camp had to turn away 100 teens last year.  It’s a challenge teens seem to relish.
“They love it,” said Ray Reynolds, the 31-year-old camp director and founder.
“The millennial generation is ready to go to work … and they leave here fired up,” said Reynolds, an alumnus of Heritage Christian, and the pulpit minister of the Gulf Shores church in Gulf Shores, Ala.
Megan Cobb, a 17-year-old senior from Florence, said her experience at the camp last summer was amazing.
“It’s just the best week of my life,” said Cobb, who rides horses and barrel races in her spare time. “It has brought me much closer to God and several good friends.”
On the last Sunday campers are expected to preach and teach the lessons they have prepared at a nearby sponsoring church, Reynolds said.
“Working on the lesson is difficult at first, but as the week goes on, it gets easier,” said Cobb, a member of the Eastwood church in Florence.
Jake Leonard, a 16-year-old junior from McNeill, Miss., has increased his self-confidence and learned to enjoy preaching in the four years since he began attending camp.
“T.I.T.U.S. camp has immensely improved my skills and my ability to speak in front of crowds,” Leonard said. “It is the biggest blessing God has ever given me.”
Leonard, who was baptized during the July 2008 camp, has been preaching and teaching regularly at the two-year-old church in Pearlington, Miss. He plans to go on to college and become a minister.
In the afternoons, students are allowed to dress more casually.  They are also free to pick from nearly a dozen classes, including personal evangelism, practical ministry, missions and drama and skit production.
“We let kids have a lot of variety in their classes, and we allow them to suggest ideas to make the camp better,” said Reynolds.
Two years ago a group came to the staff saying they had friends involved in alcohol and drugs and wanted a class in counseling.  It has been part of the curriculum since then.
Late afternoons are given to fun activities such as attending a Huntsville Stars baseball game, bowling or roller-skating.
Early-morning and late-night devotionals are a vital part of developing spiritual leadership and strong friendships, campers say.
“A lot of the week can be very emotional and very happy at the same time,” said Cobb, who has attended camp for two years.   “There’s a lot of crying.”
The camp is basically free for the campers, requiring only a $25 deposit. The administration and staff, all volunteers, raise the money so young people don’t have to worry about the cost.
A month after campers go home, staffers call their home churches, making certain church leaders are using the teen’s newly acquired skills.
“This is something churches would do well to invest in,” Reynolds said.  “Young people are excited and ready to get in the pulpit and in the classroom.”