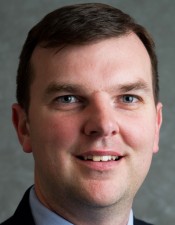 It’s time for churches to face, and combat, pornography and sex addiction in our pews

Ryan Butterfield
Their eyes lock despite the distance between them. He has looked forward to seeing her again. She smiles, and he almost blushes at the thought that she likes what she sees.
“She would never hurt me,” he thinks. “She is more beautiful, more perfect than any woman I could ever imagine.”
The sound of a door opening jolts him back to reality.
Panic surges through his body. He can’t believe an hour passed that quickly. With practiced fluidity, he closes the video on his computer and erases the Internet history.
His wife notices the strange look on his face.
“What have you been up to?” she asks.
“Just working on tomorrow’s Sunday school lesson,” he responds. Although feeling something is not right, she dismisses it as her husband gives her a kiss.
Heart still racing, he berates himself and angrily promises himself that he will never view pornography again.
Hours later, when his wife goes on to bed, he returns to the computer determined to focus on class preparation. Despite the internal protests — as if the computer mouse had a mind of its own — he navigates back to the pornographic website.
“I already ruined today. I’ll start fresh tomorrow and never look at pornography again. Tomorrow. I promise.” He once again gets lost in fantasy. Only this time the door doesn’t open.
•

As a Christian, licensed counselor and certified sexual addiction therapist, I have heard similar scenarios countless times. Often it is after the pornography problem has been discovered, and the couple is on the brink of divorce. Neither has much hope for the future, nor do they feel they can turn to the church for help. “I have never felt more confused, more betrayed and so alone,” a wife once told me.
The growing number of Christian men and women seeking help for pornography addiction is of great concern while at the same time gratifying. For many, to admit they are addicted to pornography, their lives are out of control and they need help is the necessary first step in regaining control of their lives.
The most alarming phenomenon may be the influence — or should I say, the non-influence — of the church in helping sexual addicts. Sexual sin long has been the unseen elephant in the pews of many churches. The Internet has compounded the problem.
Intentional avoidance leaves addicts trapped, as they simultaneously pray for a “Good Samaritan” to come to their aid but also for the congregation to leave them alone to suffer their well-deserved consequences in seclusion. Most times the latter prayer gets answered, and another husband, another wife, another father, another mother, another marriage slowly disappears as the church looks on, fearful and frozen.
The church, most times, avoids even those who by the grace of God have fought their fears, faced reality and continue to deal effectively with their addiction. Men and women in recovery from pornography addiction often go unacknowledged and unsupported. To draw attention to their freedom would simultaneously draw attention to the fact that pornography is a prevalent issue in the church — and that many remain prisoners of war.
The question of whether or not pornography is prevalent in the church has long been answered. Study after study shows that at least 25 percent — and typically closer to 50 percent — of Christian men regularly view pornography. Although many are surprised by polls that state 20 percent of Christian women are addicted to Internet pornography, most experts in the field believe the actual number is significantly higher.
Yet pornography and sexual addiction rarely are mentioned in an assembly. Even more rare is a church that has an organized, consistent, effective plan to help those struggling.
Which is the bigger problem in the church? The man or woman who avoids reality by consistently returning to a world of pornographic fantasy, or the congregation that buries its head in the sand, preferring its own fantasy that pornography and sex addiction are not issues?
Thankfully, more Christians see the need to combat Internet pornography and want to reach out to those caught in addiction. Unfortunately, the majority who want to help feel overwhelmed and unsure of how to start.
To begin, the church must intentionally provide an environment where those struggling feel safe to admit they need help. One of the biggest obstacles for sexual addicts to overcome is the shame they carry inside. This shame is compounded by the church’s silence, which the addict interprets as judgment against them.
How safe is your congregation? How many prayer requests involve sexual issues? How many men and women are open about their struggles with pornography, affairs, masturbation or lust? How often are women/teens specifically asked to wear something appropriate and modest? How many sermons and classes directly confront sexual sin and sexual addiction?
By bringing the topic of pornography into the light, the church can begin to send a message of understanding, hope and freedom that will reduce the addict’s shame and encourage him or her to reach out for help and healing.
The church also needs an idea of the extent of the problem it faces. A truly anonymous survey of the members of the congregation will provide factual information and point the church in the proper direction as it determines the steps it needs to take.
Ultimately, facilitating a recovery group for sexual addiction, providing counseling with qualified therapists and having non-judgmental attitudes are needed so that struggling Christians can find the lasting freedom they long for. Satan works through deceit, secrets and avoidance.
Jesus said, “The truth will set you free.” Perhaps the most relevant question to be answered is, “Is your congregation ready to be set free?”

RYAN BUTTERFIELD is a full-time counselor with Capstone Treatment Center in Judsonia, Ark., and vice president of the Center for Christian Broadcasting Inc., a Christian nonprofit in Searcy, Ark. The nonprofit is producing an eight-disc DVD series to help churches and individuals understand and deal with sexual addiction and Internet pornography. For more information, e-mail [email protected].