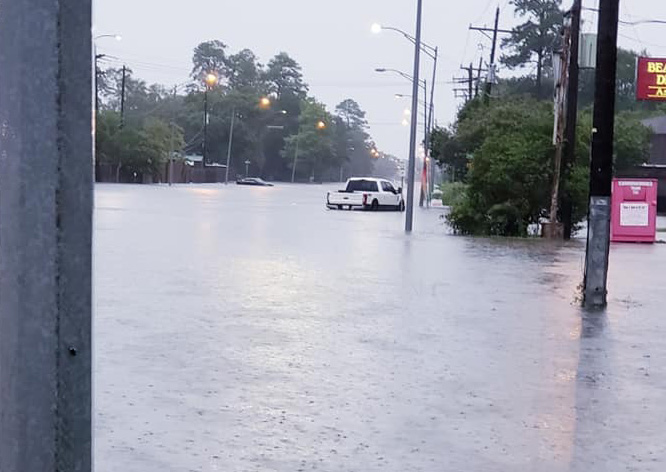 National
Dowlen Road, near the Westgate Church of Christ, was one of many roads in Beaumont flooded by Imelda. | Photo by Tim Brasfield
Print
Share:

‘It rained nonstop for three days’

In the southeast Texas town of Beaumont, a family that was forced to evacuate two years ago during Hurricane Harvey had just moved back into their home.

Then Tropical Storm Imelda dumped 2 feet of water into their living room.

“It rained nonstop for three days,” said their neighbor, David McLean, who serves as youth minister for the Westgate Church of Christ in Beaumont. “We have families that were evacuated by boat and taken to shelters.”

The tropical depression brought 40-plus inches of rain to areas east of the Houston metro — from Winnie to Beaumont.

Amazing evolution from upper low formation a week ago to quick development & landfall of #Imelda pic.twitter.com/rflBXcx9w2

McLean and his family evacuated early, knowing that the road exiting their neighborhood was prone to flooding. They didn’t want to be trapped — like they were during Harvey — so they spent a few nights at the church building.

A few cars in the parking lot were waterlogged, but the building stayed dry.

“Harvey was widespread rainfall,” McLean said, “and this was flash flooding. It was unexpected.”

Thankfully, “it’s not standing water like it was in Harvey,” he told The Christian Chronicle. “People are already able to go back in and check on their stuff.”

In Houston, the homes of three families from the Memorial Church of Christ flooded, said preaching minister David Duncan. “We have had crews working all day at those houses,” he added.

-Disaster Assistance Mission/Beaumont-Winnie TX Flooding-Well it has been a long day but a good one. I arrived in…

In Beaumont, the Westgate church is doing what it can to help storm victims, but is not set up as a shelter. Church leaders will spend the next few days evaluating the needs of the congregation and the community, McLean said.

Meanwhile, those wishing to help can donate directly to the church or to a disaster relief ministry.