As Christians in Canada grapple with the death of Gordon Parmenter, they send up prayers for the suspect — a young man who once worshiped with the church

Two days after a church elder was shot and killed during Sunday worship, members of the Salmon Arm Church of Christ surrounded his widow with love and prayer.

They also offered prayers of forgiveness for the shooter — a young man who once worshiped alongside them.

Gordon Parmenter, 78, died April 18 after an armed man entered the church’s building in the western Canadian province of British Columbia and opened fire with an “assault-style rifle,” according to news reports.

Another church member was shot in the leg before the congregants were able to wrestle the shooter to the ground. 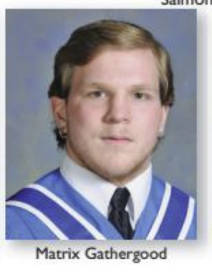 A yearbook photo of Matrix Gathergood.

Police arrested 25-year-old Matrix Gathergood, a former neighbor of Parmenter. He is charged with first-degree murder, aggravated assault and disguising his face with intent to commit an offense, the Salmon Arm Observer reports. Church members including Parmenter’s son, Dave, said that Gathergood targeted the church elder.

“It doesn’t make any sense,” said Doug Kendig, another elder of the Salmon Arm church, in a phone interview with The Christian Chronicle.

Parmenter and his wife, Peggy, had befriended Gathergood, described by Kendig as a large, athletic man who had participated in wrestling and rugby during his high school years. The Parmenters had attempted to help the troubled youth — just as they had helped multiple children in Canada’s foster care system. The couple had the designation of Level 3 foster parents, Kendig said, and had cared for children with physical and mental disabilities.

Routinely, “Gordon had people in his home who found it (to be) a welcoming and safe place,” Kendig said. “Gordon was a real friend.”

Gathergood had worshiped with the church several times, Kendig said.

“He always seemed to be listening,” Kendig said. “He sat up in the front row with Gordon.”

Gathergood suffered from mental disorders and had once talked about his suspicion of “people who were controlling things,” Kendig said, adding that he didn’t know if that had any connection to the shooting.

“We regard his attacker and his family with love, not hostility, as Jesus loved those who nailed him to the cross.”

However, when Gathergood recently returned to Salmon Arm after a stint in the neighboring province of Alberta, “the things he was saying were psychotic,” Kendig said. “He wasn’t in his right mind. Gordon knew it and tried to help in any way he could.”

The Parmenters tried to refer the young man to mental health services, but to no avail, Kendig said.

Then, on March 14, a fire severely damaged the Parmenters’ trailer home. Investigators said the fire likely was arson, though police have not yet named suspects in the case. 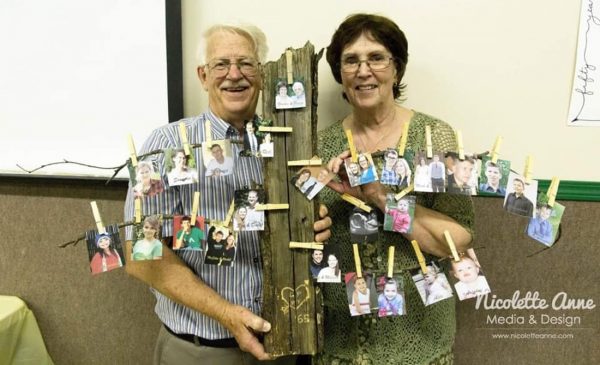 Kendig, who also is 78, was in Calgary, Alberta, when the shooting happened. He learned about the tragedy from his wife, Linda.

“It’s not something she wants to talk about,” Doug Kendig told the Chronicle. Most of the church members still are in shock.

The 63-year-old Church of Christ meets in a town named for the Salmon arm of Shuswap Lake in British Columbia’s interior. Lynn Anderson, a well-known preacher among Churches of Christ and director of HOPE Network, helped launch the congregation and served as one of its first ministers. The church once operated a Christian school for grades kindergarten through seven. 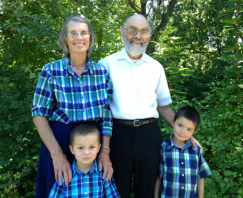 Linda and Doug Kendig with their adopted grandchildren

Now about 20 to 30 souls meet for worship most Sundays, Kendig said. The two elders do most of the teaching and preaching.

“We were elders together, but he was one of my best friends, too,” Kendig said of Gordon Parmenter. “What a hole this has left.”

Born in California, Gordon Parmenter and his wife (a native of Texas) were active members of congregations in the U.S. and Canada, Kendig said. Gordon Parmenter had worked as a logger, sailor, firefighter and manager of a Coca-Cola plant. He also was a hog farmer, cabinet maker and auto repairman who continually “used his talents to help those in the congregation and others, too.”

But their true love was parenting, according to the church’s website.

“Gordon and Peggy have four children, numerous grandchildren and a host of foster kids who have benefited from their godly home and teachings,” the website reads.

A gofundme page, initially set up to help the Parmenters recover from the house fire, is now a memorial fund for the family. 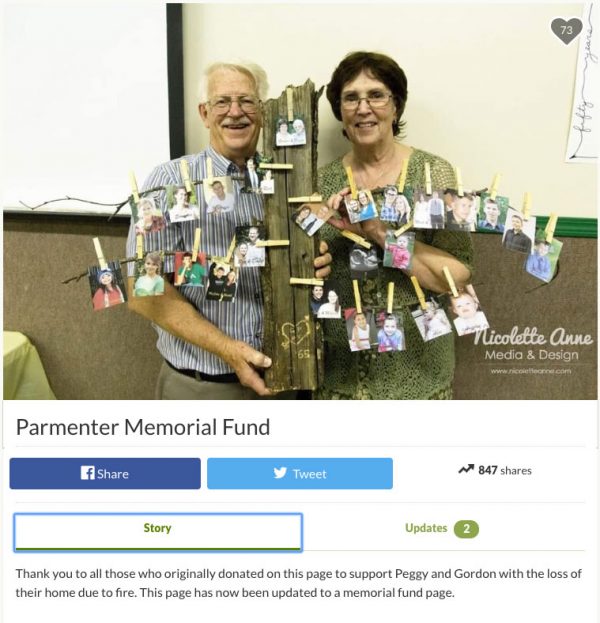 A gofundme page posted after the Parmenters’ house fire is now a memorial site.

“This was a senseless event,” the page reads, “though the only thing that makes sense is to honor Gord by loving others just as his Jesus did. We regard his attacker and his family with love, not hostility, as Jesus loved those who nailed him to the cross.” 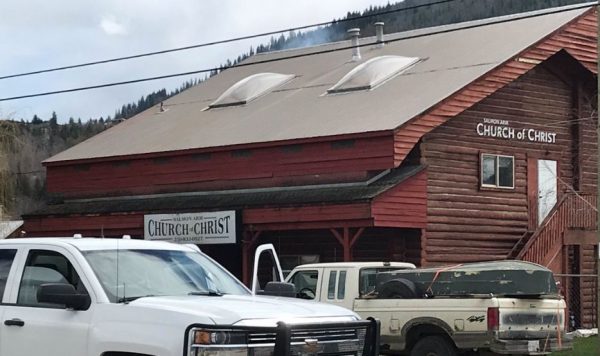 The meeting place of the Salmon Arm Church of Christ.

The shooting happened before church members had taken the Lord’s Supper, so the small congregation gathered at a member’s house Sunday evening for communion. It’s unlikely that the church will meet in its building — still a crime scene — for Easter Sunday, Kendig said.

Toward the shooter, “there’s a forgiving attitude, not a revenge attitude,” the church elder added. He and his wife, who have two adopted grandchildren of their own, pray that the tragedy won’t deter Christians from reaching out to troubled youths and all those who suffer.

“All I can say to that is, ‘You can’t,'” Kendig said. “If people withdraw into themselves, it seems like the world of evil wins.” 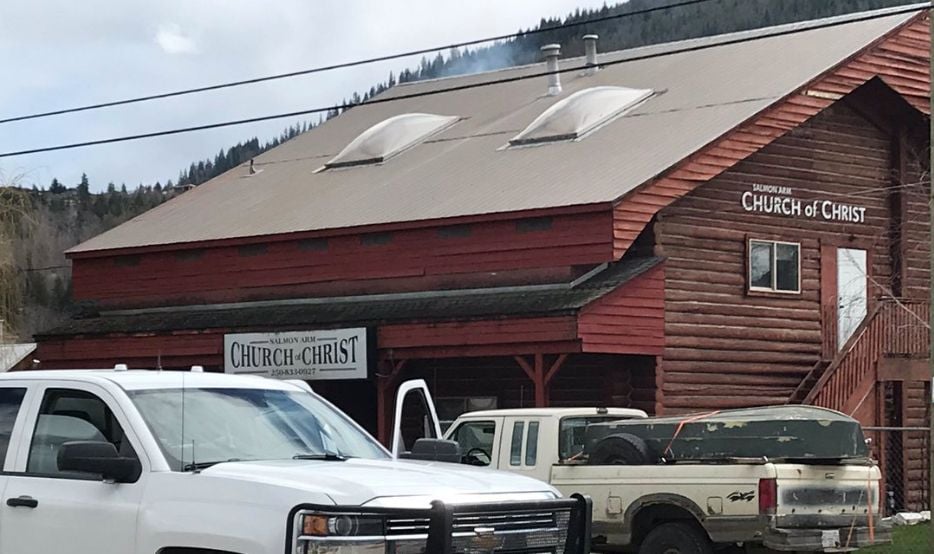 A church elder is dead and another member wounded after…