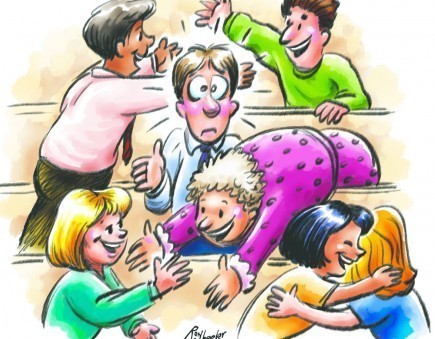 Is your church visitor-friendly?

When Sarah Stirman and her family moved to the Dallas area last summer, they visited half a dozen congregations.

At each, their experience was basically the same.

“Our family sat alone and was ignored before service started. If we were lucky, we were greeted during ‘shake and bake,’” she said, referring to the forced greeting period when the worship leader asks everyone to stand and welcome those around them.

Undoubtedly, no Church of Christ would describe itself as unfriendly.

Too often, though, congregations fail to show Christ’s love to strangers, said many members and leaders interviewed by The Christian Chronicle.

“Most congregations are filled with very pleasant Christians who are so enjoying each other’s company that they often don’t notice those who visit their assemblies,” said Mark Blackwelder, a Bible professor at Freed-Hardeman University in Henderson, Tenn.

Michael Ray, minister for the Laurel Church of Christ in Maryland, said churches like to talk about how friendly they are.

“What they really mean is that they’re friendly to each other. But guests? Not so much,” said Ray, who urges members to observe a “two-minute rule” after the closing prayer and talk only to people they don’t know before seeking out friends.

John Scott spent 19 years as minister for the Saturn Road Church of Christ in Garland, Texas, before going to work for Christian Care Centers last year.

Scott and his wife, Teresa, have visited about 30 congregations in the past 15 months — often with him as the guest preacher.

“We have been dismayed by the rampant self-delusion of local congregations about their perceptions of themselves,” he said. “Sure, folks are friendly and gregarious — to the people they know.

“But the poor Joe Schmo that wanders in not knowing anyone is usually only minimally engaged by the congregation despite our fancy ‘welcome centers’ or coffee bars.”

ALL ALONE ON A PEW

It happened years ago.

Still, Laura Tokosh remembers being a young mother with an infant and visiting a church where no one spoke to her.

“It left such an impression on me that I always try to reach out to others, whether I’m a visitor or not,” said Tokosh, an Ohio resident who worships with the Ravenna Church of Christ on Sundays and teaches a Wednesday night class at the Kent Church of Christ.

Two decades ago, Laura Leach was the “new girl” at church who came in late, sat in the back and left early.

Now, her husband, Rick Leach, preaches for the Central Church of Christ in Bedford, Ind., and she makes greeting visitors a priority.

“The first 10 minutes someone steps in your building will determine if they ever return,” Laura Leach said.

“Too often, churches are stuck in cliques and cannot get past their few friends to say hello to any new folks,” she added, stressing that she was speaking in general terms and not about her home congregation.

Steven Hunter, minister for the Tompkinsville Church of Christ in Kentucky, won’t ever forget one church where he spoke.

The preacher who invited Hunter greeted him but excused himself to take care of a class situation.

“When left to myself, not one person acknowledged me,” Hunter said. “I often wonder what they thought after I was introduced and got up to speak. I told my wife that if I had been a visitor looking for a church home, they would have been ruled out.”

Besides teaching at Freed-Hardeman, Blackwelder serves as a minister for the Estes Church of Christ. He described moving to a rural community years ago.

The community had two mid-sized churches. Blackwelder and his wife, Dana, decided to visit both.

The first church had a nice building and an appearance of prosperity and progress, he said. But only one person besides the preacher greeted the couple.

The second church met in an older facility in a less-affluent part of town.

“We were warmly greeted by many, and one of the families invited us to their house for lunch,” Blackwelder said. “You can guess which church we chose.”

Blackwelder, who presents seminars on church growth, recommends three specific strategies to reach out to visitors:

• First, the church’s culture must be shaped to focus on others. “An outreach mentality should be developed so that Christians see their primary function not as maintenance but growth.”

• Second, leaders must overtly exhort members to approach others. “This is a function of communication. The members need to hear from the leadership that we can do better and why it is important.”

• Third, specific actions must be enacted to ensure contact. “This can include the usual greeters and ‘goodbyers,’ but it needs to extend beyond that. Inviting guests to sit with you, expressing genuine interest in the visitor through more extended personal conversations and invitations to lunch, pizza, coffee, etc., are examples of specific actions.”

“Most people who are not already members of Churches of Christ are unlikely to be comfortable visiting church services anyway,” he said. “Growth among the unchurched or denominational sectors generally comes through personal contact away from the building.

“However, that important transition from non-Christian to new Christian … can be heavily influenced by the church’s friendliness and a growing number of meaningful relationships with members.”

After their Dallas-area visits, Stirman, her husband, Troy, and their two teenage children chose the Greenville Oaks Church of Christ in Allen, Texas.

“We landed at a church where we knew a few folks and were greeted warmly,” she said.

The experience of Stirman’s family has heightened her awareness of potential angels.

“When we wear the name of Christ, it is our responsibility to be hospitable to those who walk into the building where we worship,” she said. “Granted, some Sundays we need the love and comfort of our church family to surround us more than we can be the hands and feet of Christ to others. But if each of us took this simple action seriously, each visitor would be welcomed every time they walked into the building.”