ATHENS, Greece — Some of the strongest Christians I know are Iranian.

I’ve been thinking about them a lot in the midst of growing tensions between our two countries. 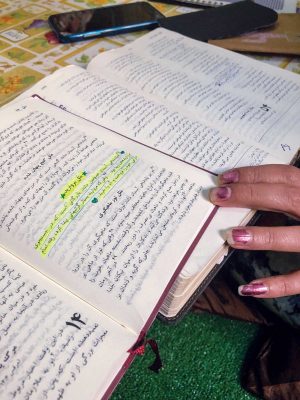 On top of a Farsi-language Bible open to the prophet Isaiah, Miriam flips through her own copy of a Farsi New Testament. She has highlighted the parable of the Pearl of Great Price in the Gospel of Matthew.

As I watch news of missile attacks, a downed airliner, protests and grim prognostications, I remember Miriam, her bronze fingers with chipped nail polish tracing over the words of a Bible verse in Farsi, right to left (just like Hebrew). She had highlighted the words in yellow and festooned them with little hearts and stars.

“Again, the kingdom of heaven is like a merchant looking for fine pearls. When he found one of great value, he went away and sold everything he had and bought it.”

I met Miriam during a visit to Athens in 2018. She was one of countless refugees from the Middle East, and she was part of a Bible study conducted by Christians working with Mission Resource Network’s MedRim initiative.

We sat on floor cushions around a low, Asian-style table in a room with bamboo-lined walls. A Korean Christian owned the place and was letting the refugees live there.

Only one of the Iranians in the Bible study knew much English. He wasn’t feeling well, but he translated nonetheless — and still managed to be a comedian. When the teacher debated whether or not to use a small nail to hang up a dry-erase board, he yelled, “It’s OK! If we make hole, we just use toothpaste” to cover it.

(I’m so glad the language of apartment rental hacks is universal.)

The study centered on the difference between being saved and being a disciple. It was slow going. These folks were brand new in their faith. But the teacher was patient, even when our translator had to leave.

Miriam was adamant about sharing her story with me, and she wasn’t going to let language be a barrier.

She pulled out her phone (yes, all refugees have phones) and typed text messages into a translation program.

From the broken English in her texts, I gathered that she had encountered an American mission team soon after her arrival in Greece. She studied the Bible with them, but then they left. She prayed and prayed to God for some sort of sign that what she had learned from them was truth.

They need our encouragement. They need discipling.

And we need to learn from them.

A few weeks later she got a letter from the missionaries with the story of the Pearl of Great Price and an oyster shell necklace bearing a tiny pearl. She ran to her room to get them both. I had to see them. The letter was folded, wrinkled and worn. At the end, it said, “All our people in the U.S. prayed for you.”

Miriam was back on her phone, typing at an almost frantic pace.

When she got the letter and the necklace, “I cried,” she wrote, “because I had asked God for this.”

That’s just one of countless stories of faith I’ve encountered among our Iranian brothers and sisters in Europe. Even in the refugee camps, many have endured persecution for their newfound faith. They need our encouragement. They need discipling.

And we need to learn from them.

Please join me in praying for the budding faith among the Iranians in Europe and those still living in Iran. I think God’s doing something amazing among them, and I won’t be surprised if someday soon the epicenter of our faith shifts back to the Middle East.

Sound impossible? I can show you a Bible verse or two that say otherwise — in English and in Farsi.

ERIK TRYGGESTAD is president and CEO of The Christian Chronicle. Contact [email protected]. Find more stories about refugees and learn how to help them at christianchronicle.org.