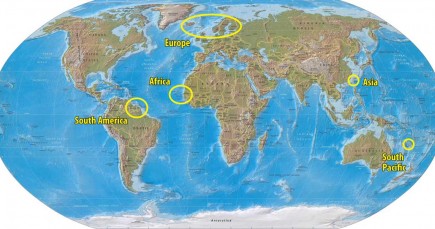 Into all the earth

Erik Tryggestad
Churches of Christ support mission efforts around the world, but some countries receive more attention and resources than others.
Following are examples of nations that have small, struggling congregations — and a few that have no Churches of Christ at all.

SOUTH AMERICA
SURINAME, FRENCH GUIANA — Churches of Christ support medical ministries and evangelistic efforts across the English-speaking nation of Guyana, but pay less attention to neighboring Suriname. The former Dutch Guiana is home to 458,000 people.
Jim Krumrei, a missionary in the Netherlands, planned to travel to the capital, Paramaribo, in mid-October to help a small, Dutch-speaking congregation as it constructed a new building.
Suriname also has a few church members among its Haitian immigrant population, said longtime missionary Jerry Davidson.
French Guiana, a territory of France, also has a large Haitian community among its 209,000 souls. Haitian minister Michal Lymat has worked with small groups of believers there. But little work has been done among the country’s other ethnic groups, including Guianese of European and Asian descent.
Yvon Beaudoin, a minister in the Canadian province of Quebec, makes trips to French Guiana to support the work. For more information, contact Operation French World.

AFRICA CAPE VERDE, GUINEA-BISSAU — The Republic of Cape Verde, an archipelago of 10 islands about 350 miles west of the African continent, is a former Portuguese colony.
Though the country’s standard of living is higher than that of many African nations, severe droughts in the past century have resulted in massive emigration. The islands’ population is about 530,000.
Arnold Dzah, a missionary in the West African nation of Senegal, is in contact with a handful of church members interested in evangelizing Cape Verde. The members need oversight and financial support, Dzah said.
Guinea-Bissau, formerly Portuguese Guinea, gained independence in 1974 and is home to 1.7 million souls. It is one of the poorest countries in the world.
Paul Caham, an African church member, helped launch a congregation there a few years ago, but a doctrinal conflict arose and the young church was absorbed by a Brazilian denomination, Dzah said. Caham moved to Senegal and is training to be an evangelist. “He can be a tool for that work,” Dzah said.
“If a team will be interested to go there to find out exactly what is on the ground, that will be fine,” Dzah said. Contact Dzah at [email protected]

ASIA, SOUTH PACIFIC TAIWAN, NEW CALEDONIA — American military personnel established the first Church of Christ in Taiwan in 1957, but evangelism is a challenge on this island of 23 million people.
“There are a hundred saints here fighting for 23 million souls,” said David Millican, who works with the Taichung congregation. John Yo, the church’s minister, said that the island has six congregations, each with between five and 30 members.
Though the Taichung church has only 10 members, “we have set goals for evangelizing Taichung and are already exceeding them,” Millican said. The church seeks financial support. Short- and long-term workers are welcome. Contact [email protected]
More than 4,000 miles southeast of Taiwan is New Caledonia. The French territory with a population of about 245,000 may be the largest island in the world with no Church of Christ.
“There have been attempts to start a New Testament church in New Caledonia by church members from Australia, but nothing sustained yet,” said Bren White of Operation French World. For more information, see www.operationfrenchworld.com.

EUROPE SCANDINAVIA — Norway, Sweden, Finland, Denmark and Iceland are known for their cold winters and high standards of living.
Churches of Christ have sponsored evangelistic efforts in Norway and Sweden, but today only a handful of members remain in both countries. Missionary Royce Sartain works with a small congregation in the Icelandic capital, Reykjavik.
Arnold and Wanda Pylkas work with small groups of believers in Hervanta, Finland. Their son, Steve, a minister at the Trenton, Mich., church, has helped coordinate summer youth camps. The College church in Searcy, Ark., supports the work.
The Pylkases recently began working with Marko Jauhiainen, “an individual who is part of an indigenous network of small groups that are going back to the Bible and resisting the temptation to be absorbed into denominationalism,” Steve Pylkas said. The Pylkas family ”is coming to believe that their dream to plant an indigenous Church of Christ in Finland was already a part of God’s plan, and they are excited about the possibilities.”
For more information, contact Steve Pylkas at [email protected] or call (734) 676-1797.