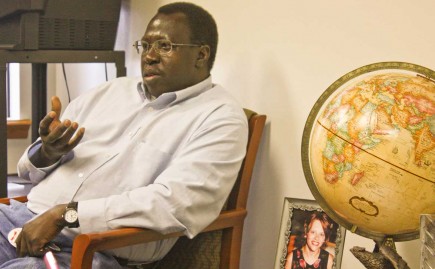 In U.S. and Africa, refugee teaches Christ to his people

Amanda Jordan
OKLAHOMA CITY — Halfway around the world from his home, Andrew Konda found people to help him “go and teach.”
Konda, one of the thousands of Sudanese refugees living in the U.S., hopes to return to his African homeland and share his Christian faith.
As peace returns to Sudan, Konda heeds Jesus’ command to his disciples in Matthew 28, to baptize, teach and obey.
He reads the Bible in Arabic and works hard to master the Scriptures in English. His adopted family — the Wilshire Church of Christ — labors alongside him as he ministers to his fellow Sudanese in Oklahoma City and prepares to take the message of Christ to Sudan itself.
At the same time, Konda has helped the 325-member Wilshire church recognize the international mission field at its doorstep, said congregational minister Jeremie Beller.
“God says, ‘Go,’ and it’s almost as if we’ve been unwilling to do that,” Beller said. “So God says, ‘OK, I’ll bring other nations to you now.”
FROM SUDAN TO SOONER STATE
Before Sudan’s civil war, Konda and his wife, Neget, lived among the Nuba Mountains in the East African nation.
{{MAP}}
As forces from the predominantly Muslim north and Christian and animist south clashed, Konda found himself caught in the middle of the bloody conflict. He fled north to the Sudanese capital, Khartoum. He soon discovered that he was not welcome.
People in the capital “tried many times to kill me,” he said. So he fled further north, to Egypt. There, in the predominantly Muslim nation, he gained a new interest in his Christian faith and began studying the Scriptures at a Bible school.
Rather than return to Sudan, Konda and fellow refugees in Egypt applied for a United Nations relocation program. He and his wife were sent instead to Oklahoma.
Konda didn’t know English — or even that the U.S. had 50 states. He was amazed by the availability of food, and equally amazed that eating too much of it could kill you. His doctor warned him about high blood sugar. In Africa, death comes from lack of food, he said.
Looking back, Konda sees God’s hand in his relocation.
“When I came here, I found a group (of refugees) here in Oklahoma,” he said. “I knew them when I was in Egypt. They said, ‘Oh, Andrew, thank God. We don’t have anybody to make fellowship with us.’”
Konda began studying the Bible with the group in Arabic, but he longed for a better understanding of the Scriptures.
As part of his agreement with the U.N., Konda had to find employment to support himself and repay the cost of the flights that brought him to the U.S. He got a job working in packaging for The Oklahoman newspaper.
One day, while thumbing through the newspaper while on break, he noticed an ad for free Bible courses through a program called Partners for Christian Education International.
Members of the Wilshire church oversee the Partners ministry, which helps fellow church members start and operate Christian schools and provides Bible study materials.
The ministry’s directors introduced Konda to the World Bible School correspondence program. He began studying and started attending the Wilshire church. Church members Zach and Elizabeth Opheim befriended and helped Konda
and his wife. Soon, the Sudanese couple was baptized.
LONGING FOR SOULS AT HOME
Konda hopes his fellow refugees in Oklahoma also will decide to be baptized. He also teaches about 40 students in Sudan through World Bible School.
He and his wife have three children — a daughter, Saundra, and two boys born in the U.S. The couple named them Sam and Samuel. (That causes some to chuckle, but Konda says the names are completely different in Arabic.)
Konda hopes to attain American citizenship and train for ministry in Sudan at Sunset International Bible Institute in Lubbock, Texas.
“Now I have a big vision to go back to Sudan to preach the Gospel,” he said. “The voice that I heard when I was in Egypt — to go and to teach — now is clear to me.”
Konda said he often pleads with Jesus to wait to return until he can complete God’s plan for him, going back to Sudan and bringing the church with him.
“(I want) my vision to come true — to go to my home and preach the Gospel to my people,” he said. “Saving lives of the people is my responsibility now.”