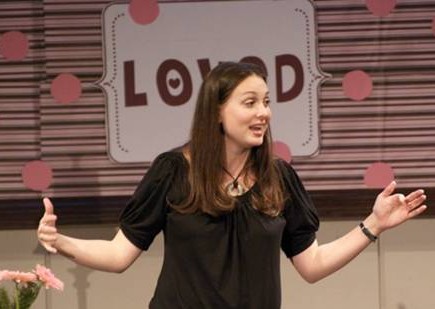 Joy McMillon
TENNESSEE MEMPHIS — Three churches — Sycamore View, White Station and Highland — co-hosted the first Mid-South Girls Conference Jan. 31. Nearly 300 girls and sponsors attended from surrounding states. Kayci Ross of Memphis was the keynote speaker.
Youth minister Jim Hinkle said the environment, including “fru-fru” decorations and chocolate fountains, was designed to appeal to girls. The theme, “Indulge” was about indulging in the richness and lavishness of God’s love toward them. “So much of what we do is male-led, male-designed and male-dominated, and we wanted to address specific needs of the girls,” Hinkle said.
NASHVILLE — Doris Clark, a longtime missionary in Honduras, was honored with the first “Woman of Hope” award presented Jan. 31. Along with Clark, about 200 ladies from 30 churches and seven states turned out for the first annual “Women of Hope” Conference in Nashville, according to organizer Alisa Van Dyke.
Sponsored by Healing Hands International, the program featured six speakers including the honoree, Clark, of Atlanta. Other speakers included: Carolyn Baldwin Tucker, Cindi Bradley, Vanessa Mount, Joanna Merritt and Joyce Anderson.
NASHVILLE — After a period of rapid growth, the Harpeth Hills churchadded a third Sunday morning worship service on Jan. 25. Attendance hasrun around 1,300 for the three services at 8:30, 945 and 10:50 a.m.,said Chris Miller, preaching minister. Sunday School classes for allages continue at 9:45. One class, targeting older adults, was added at8:30. More than 700 people meet in 60 small groups in homes on Sundayevenings.
LOUISIANA JENNINGS — Minister J.C. Bailey believes in the power of prayer. He moved to this town of 11,000 only four weeks ago, but Bailey already has called the community to pray for Jeff Davis Parish Authorities to solve the deaths of seven parish women. The church had several prayer services open to the public last week, and among the visitors on one evening were family members of four of the slain women.
Bailey, who has been out of ministry for the past 13 years, is encouraged. “I’m pleased and excited at the response we have gotten.”  Several television stations covered the prayer services, Bailey said.
MINNESOTA VIRGINIA — The daughter of Virginia minister Edward Clark helped police identify and connect a suspect for a series of purse thefts and credit card fraud. Diane Clark became suspicious after a woman conned her parents into giving her cash to help her get home for Christmas.  The woman is now in jail, awaiting charges. The 14-member church now has a program for background checks. “We’re going to be more careful, but we’re going to keep being a benevolent and caring people,” the minister said. The church received many extra calls for help after news of this event became known. “Several hung up when asked for ID information,” Clark said.
TEXAS PALESTINE — The Crockett Road church recently hosted its 13 th annual “Give Me the Bible” conference and luncheon. According to organizers, 105 people from 18 area churches participated. Aired on Sundays at 7 a.m., the program features East Texas ministers discussing various religious topics and answering viewers’ questions. Organizers announced that the program is now being aired on the Gospel Broadcast network. The “Give Me the Bible” program will begin its 20 th year of production this April.
ARKANSAS JONESBORO — The Southwest church is emphasizing ministry in its neighborhood, associate minister Chris Harrell said, in response to crime. The 1000-member church is located in the midst of an area with changing demographics, according to recently released statistics by the Jonesboro police.
The church reported significant vandalism problems in 2007. No crime was reported at the building in 2008.
“God has given us a burden to be more proactive in loving our neighbors,” Harrell said. The church conducts summer day-camps focusing on character development, drawing almost 100 kids. Renting a local apartment in a nearby complex provides a base for additional neighbor ministry.
WEST VIRGINIA HUNTINGTON — Amid increasingly difficult times, student members of the Herd4Christ reached out to their community by offering a clothing giveaway to those in need on Jan. 31.
Herd4Christ is an active Marshall University student organization of members of the Church of Christ. “Almost 25 percent of our town’s population lives below the poverty level,” campus minister Dan Hager said.
Despite an ice storm, 98 residents came for the clothing giveaway.  “It shows what a need we face,” Hager said.  Elders of the 1st Avenue and 26th Street church began the student program in 2001.