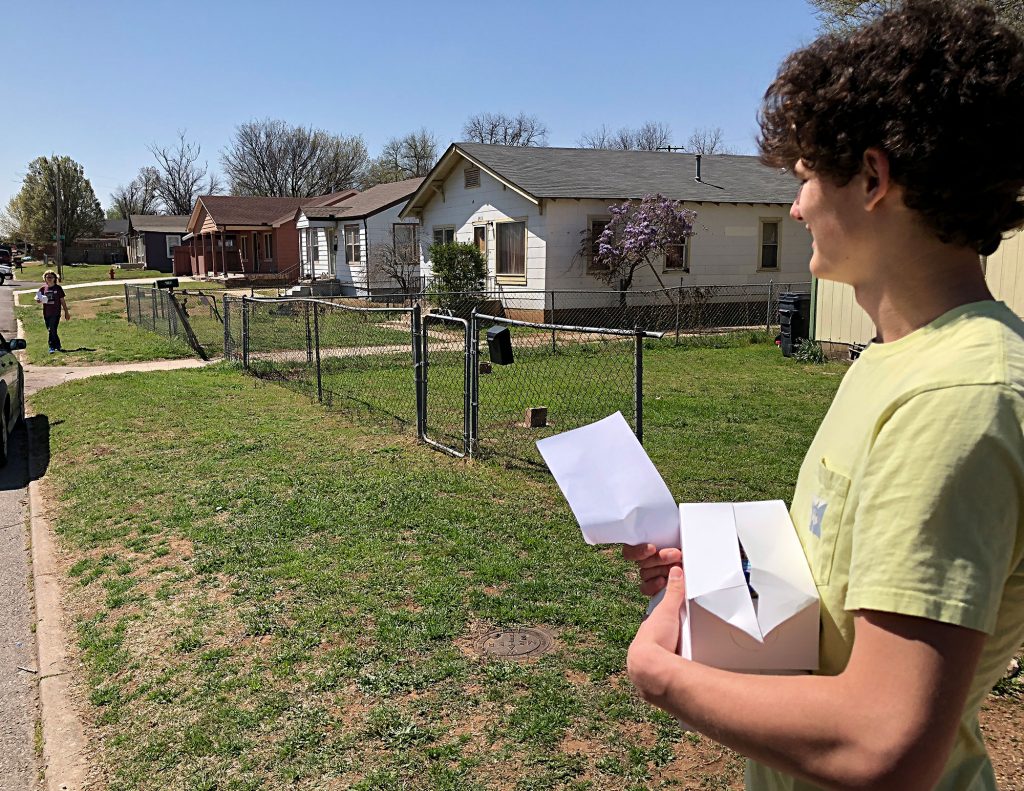 In the midst of a teacher strike, Oklahoma teens deliver lunches to inner-city families

“We’ll be back on Wednesday!” they chanted.

About five miles away, on South Harvey Street, a beige van drove slowly through the inner-city neighborhood of Capitol Hill, a mostly Spanish-speaking community of small houses, muffler shops and gas stations with barred windows. Four teenagers darted back and forth from the van, knocking on doors, handing out white, shoebox-size to-go meals and running back to reload. 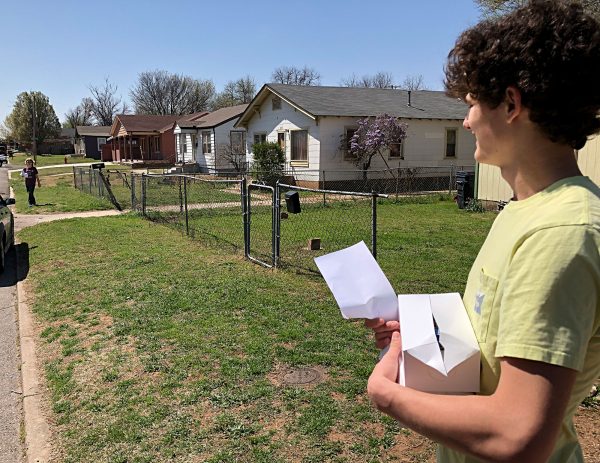 Isaac Jones, right, and George Hartman hand out free lunches in the Capitol Hill neighborhood in the midst of the teacher strike.

“We know that this walkout has affected a lot of people, including people who are less privileged,” said George Hartman, one of the teens. “so giving them lunches, which they usually would get at school, is a great way to help.”

The teens worship with the Memorial Road Church of Christ on the north side of town, just outside the affluent Oklahoma City suburb of Edmond.

Rather than use the statewide teacher strike as “Spring Break 2.0” (as one of them joked), the teens traveled south to work with the Capitol Hill Church of Christ, an inner-city congregation planted by Memorial Road that meets in a former funeral home across the street from an elementary school — empty and eerily quiet on the second day of the walkout. 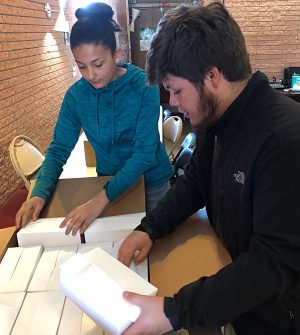 Members of the Memorial Road Church of Christ load meals for distribution in the Capitol Hill neighborhood.

Children from the neighborhood worship with the congregation, said youth minister Matthew Brazle, and the church feeds the attendees.

Many, when they arrive for Sunday worship at 4 p.m., haven’t eaten all day, he said. These same children depend on free lunches from their schools — schools that are shuttered indefinitely as teachers and state legislators lock horns.

For the Memorial Road teens, that’s a sobering reality.

“I guess before now I didn’t think school lunches were very important,” said Madison Leonard, a freshman at Edmond Memorial High School. “But now I see that kids actually depend on this.

“We complain when we don’t like something. They don’t get to complain.”

Feed the Children, a nonprofit based in Oklahoma City, provided the meals and Capitol Hill church members added some sides — including mac and cheese. Only a dozen or so families came to the church building for the lunches, so the teens loaded them into four vans and distributed them door to door along with flyers advertising where to get more.

On Monday, day No. 1 of the strike, some of the Capitol Hill residents hesitated to open their doors and accept the meals, said Jackson Tate, a junior at Memorial High.

On Tuesday, however, “some of them saw us and said, ‘Yeah, we need seven,'” Tate said. 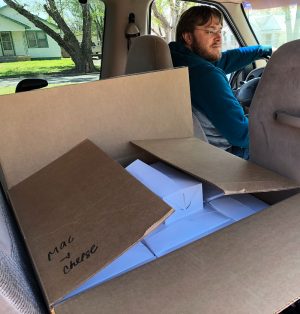 Matthew Brazle, youth minister for the Capitol Hill Church of Christ, drives a van delivering meals in the midst of the teacher strike.

After circling the neighborhood, the teens gathered in the Capitol Hill building before heading back north to Edmond. Several said they’re concerned about the impact a prolonged strike could have on their studies — and their summer.

“It’s kind of worrisome,” said Emily Rieger, a seventh grader at Sequoyah Middle School in Edmond, “because we’ve got testing, and this is the point where we’d be studying for state tests.”

Several of her friends have vacations, including Disney trips, scheduled for the end of the term, Rieger said. Should the school year be extended, some say they’ll stage a walkout of their own, boycotting the final days.

Still others have mission trips scheduled for early June, including Jared Pollock, a senior at Edmond Memorial who plans to serve alongside fellow Christians in Honduras. 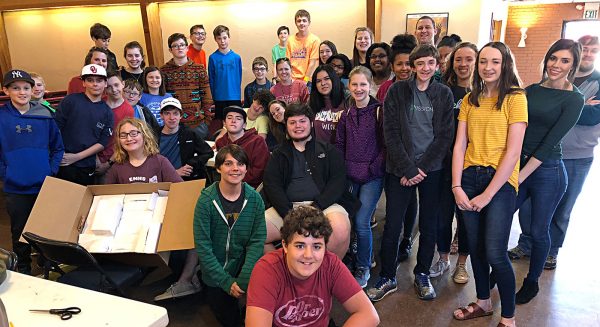 But “mission” isn’t confined to Central America, said Brian Plumb, a youth minister for the 2,400-member Memorial Road church. He teaches the youths that Jesus’ mission to serve, seek and save goes on continually — and far beyond the confines of the church’s walls. Giving out meals is one simple way the the young believers can live out their faith, Plumb said.

Logan Mayes, youth and family ministry associate, added that the service project forces the teens to “not just be blind to the real world — even in our own city.”

That reality, said Pollock, preaches a sermon of its own.

“Obviously, my graduation and moving on to the next level is very important,” Pollock said, “but seeing that these people have basic needs like food that they get from school … it really kind of puts my needs in perspective.”

For that reason, the youths said, they’ll be back on Wednesday. 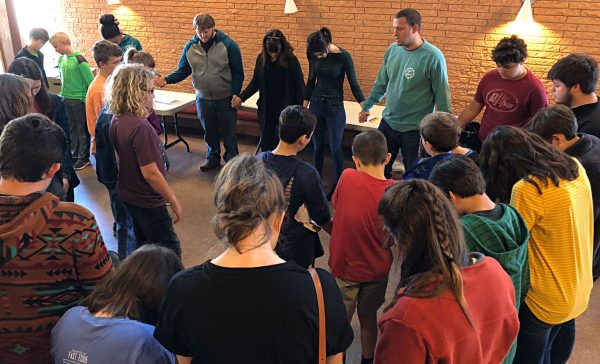 Brian Plumb, in green shirt at right, leads a prayer for the Capitol Hill community and the teachers and state legislators of Oklahoma. 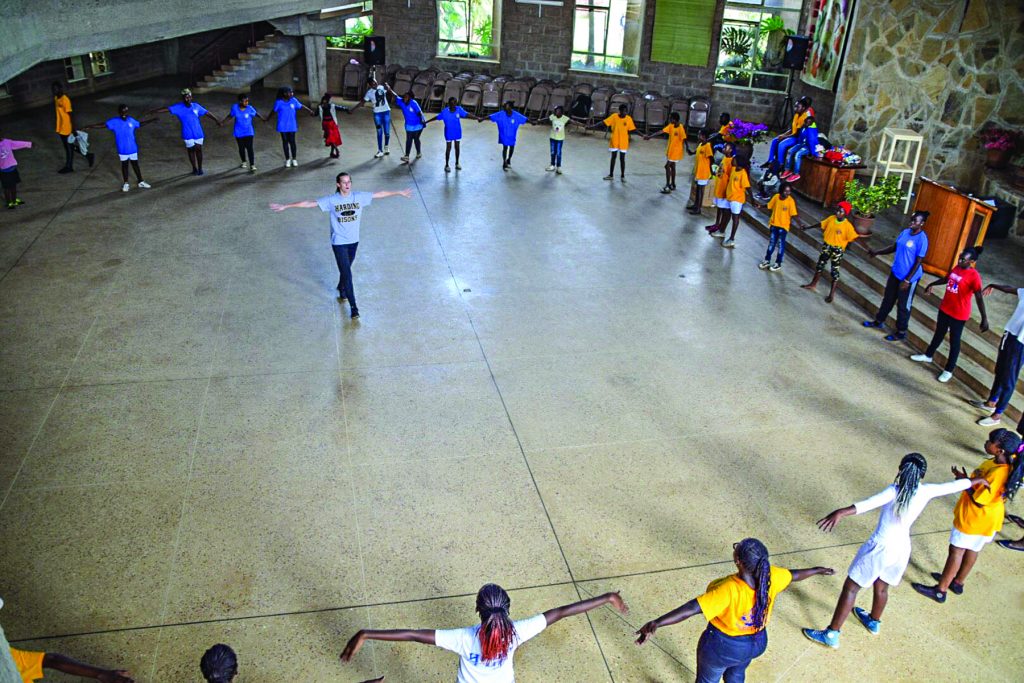 A heart to serve — and spike

People young and old look up to Catherine Hackett —…