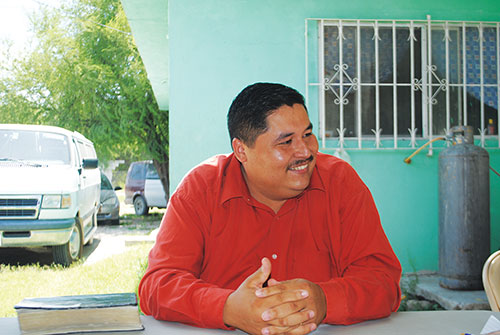 REYNOSA, Mexico — Eleven miles of pavement — and a thousand miles of red tape — separate this city on the Mexican border from McAllen, Texas.

On a scalding Sunday afternoon, Jesús Mar, known as “Chuy,” sat outside a small, dark blue house and spoke with two U.S. church elders who made the drive south. Inside, 38 members of the Colonia Solidaridad Church of Christ, which Mar and his wife, Lupita, helped launch in 2009, sang hymns as they concluded an afternoon worship service.

Only in Mexico can the elders, from the Church of Christ North in Pharr, Texas, speak with Mar face to face. The minister has applied for visas to visit the U.S. — where he graduated from high school and a school of preaching — but the Mexican government has denied his requests.

As he preaches words of hope to his brothers and sisters in Mexico, he prays for the day when he’ll be allowed to cross the border, legally.

All the while, thousands of Central Americans pass through Reynosa and across the border, illegally, into Texas. There, they surrender to U.S. authorities and receive court dates for amnesty hearings.

Mar’s mother brought him to Texas when he was 12, after she married a U.S. citizen. His stepfather sponsored him, along with his mother and sister, for U.S. citizenship but withdrew that sponsorship when he and Mar’s mother divorced.

The minister and his wife “have not let their misfortune keep them from serving the God who continues to guide our paths,” said Craig Cooper, one of the visiting elders. “They are great ambassadors for Christ in Reynosa.” 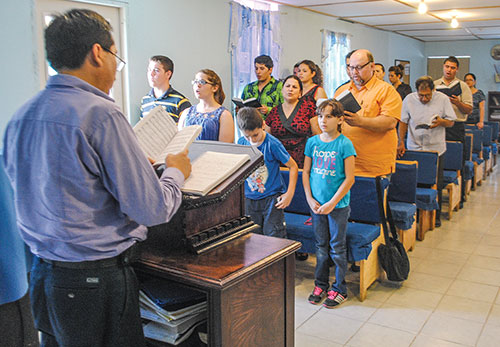 Members of the Colonia Solidaridad Church of Christ sing during afternoon worship. (PHOTO BY LYNN McMILLON)

THE CARTELS AND CHRIST

Mar, who speaks fluent English, bears no ill will toward the Central Americans — many of them children — who cross the border.

“I understand the situation in Honduras, El Salvador,” he said.

The people of Reynosa are no strangers to the gang violence ravaging Central America. Here, drug cartels battle police for control of the city. A large-caliber bullet hole in a wall across the street from the church building testifies to the city’s woes.

In a place where kidnappings and shootings are daily threats, souls are turning to Christ. Since 1996, the Church of Christ North has assisted in planting 11 congregations in northern Mexico. The church sponsors Mar’s ministry and several others, including the South Texas School of Preaching and Biblical Studies in Alton, Texas. Launched in 1995, the school has graduated 49 men and women, including Mar, who serve churches throughout Mexico and the U.S. Carrol Robertson, a former missionary to Peru, is the school’s director.

North and south of the border, about 1,700 Christians spend their Sundays worshiping God in churches supported by the small Church of Christ North, said Dale Fielder, the other elder who traveled to Mexico. He dreams of the day when second- and third-generation church members will continue the work.

PRAYERS FOR THE NORTH AND SOUTH

After they hugged Mar, his wife and his children, the visiting elders drove across Reynosa to the 100-member Colonia Lampasitos Church of Christ, where minister Mateo Dimas greeted them. 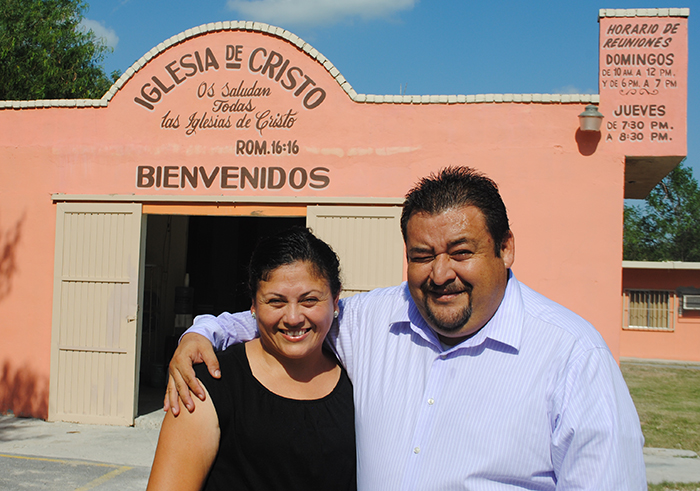 Mateo and Elizabeth Dimas stand outside the meeting place of the Colonia Lampasitos Church of Christ in Reynosa. (PHOTO BY LYNN McMILLON)

Sunday night attendance was down, due to fears of violence, Dimas said. Still, about 30 members were at the church building early to practice new hymns.

The congregation continues to practice door-knocking evangelism — aware that the doors they knock may belong to members of a cartel.

As they serve, they pray for peace in Reynosa and the troubled nations to their south — where violence has driven scores of immigrants north, through their city and into the U.S.

“In these times, there is only hope,” he said. “And our hope is not here. The great hope is in heaven.” 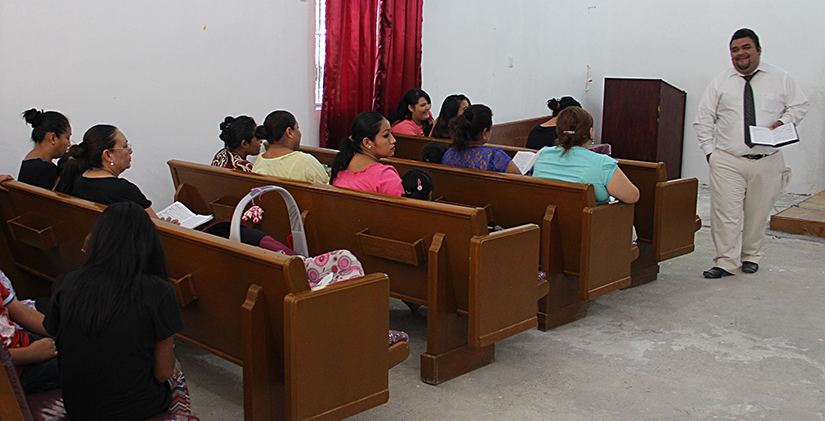 Filed under: Headlines - Secondary International News One Nación Under God