Country star baptized in a Church of Christ reflects on his spiritual highs and soul-wrenching lows.

And it was down with the old man, up with the new.

Raised to walk in the way of light and truth.

I didn’t see no angels, just a few saints on the shore.

But I felt like a newborn baby, cradled up in the arms of the Lord.

For the longest time, I’ve heard that Randy Travis was baptized in a Church of Christ.

However, I never knew the specifics of the Country Music Hall of Famer’s conversion until reading his new autobiography, “Forever and Ever, Amen: A Memoir of Music, Faith, and Braving the Storms of Life.”

My friend David Duncan recommended the book, which describes the singer’s 1991 immersion by minister Dan Harless Jr. at a Church of Christ in rural Ashland City, Tenn. 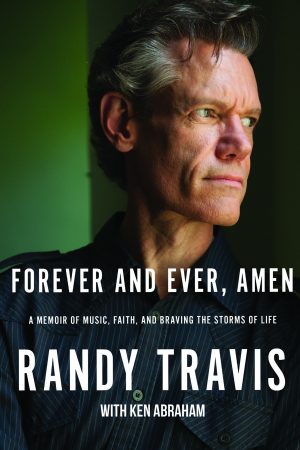 “Despite making some progress at being a better person, I still felt that if I were to die, I would not go to heaven,” recalls Travis, 60, whose all-time hits include “Three Wooden Crosses,” “I Told You So” and “On the Other Hand.” “More likely, I suspected, I had a good chance of landing in hell.”

A powerful sermon by Harless one Sunday inspired the country star to respond.

“I didn’t quite know how to express my decision to trust in Jesus and to follow him, so after the service, I approached the pastor and said, ‘I’d like to get baptized,’” Travis recounts in the 304-page memoir, co-written with Ken Abraham and published earlier this year by Nelson Books.

“The church had a baptismal pool on-site, so Brother Harless wasted no time. That same evening he baptized me, and it was a special celebration of my Christian faith,” the singer explains.

“For me baptism was a powerful illustration of the statement that the old Randy was dead, buried in the water and gone, and that I was a new person.”

“For me baptism was a powerful illustration of the statement that the old Randy was dead, buried in the water and gone, and that I was a new person. Thanks to Jesus, I had been raised to a new life here and now and eternal life in heaven to come.”

Faith and redemption play a significant role in Travis’ life — and in his book — but then so do demons and the singer’s often shameful choices. To quote one of the artist’s most popular songs, his autobiography spends a fair amount of time “diggin’ up bones.”

The book title — “Forever and Ever, Amen” — pays tribute to Travis’ greatest hit.

As the gritty narrative notes, the neotraditional singer was born as Randy Bruce Traywick on May 4, 1959, in the small town of Marshville, N.C. Frequently in trouble with the law as a teen, Travis clashed with his alcoholic father, Harold Traywick, but considered his mother, Bobbie Traywick, a saint.

“Even though we were not regular church attenders — she occasionally went to Hamilton Crossroads Baptist Church and later to Fountain United Methodist Church — she tried her best to instill biblical values in all of us kids, values such as kindness, truthfulness, honesty, humility, and integrity,” Travis writes. “She read the Bible to us, and she tried to show grace and mercy.”

In his new book "Forever and Ever, Amen: A Memoir of Music, Faith, and Braving the Storms of Life," Randy Travis recalls his baptism in a Church of Christ in rural Tennessee. HT David Duncan

Even after washing away his sins, Travis dealt with a messy divorce, financial woes (the book blames his first wife/manager for squandered millions), anger management issues and drinking problems that resulted in ugly tabloid headlines.

Most famously, he became intoxicated in 2012 with a mix of wine and an Ambien sleeping pill prescribed to his ex-wife. He showed up naked at a Texas convenience store asking for cigarettes. Police arrested him a short time later after he crashed his car.

“She tried her best to instill biblical values in all of us kids, values such as kindness, truthfulness, honesty, humility, and integrity,”

“Some folks seem to think that being a Christian means nothing bad will ever happen to you,” observes the seven-time Grammy Award winner, who has sold more than 25 million country and gospel albums. “I haven’t found that to be true in my life. But I have discovered that even when difficult times come or unexplainable events occur, Jesus never leaves or forsakes us.”

Just as Travis was putting his life back together in 2013, he suffered a near-fatal stroke that left him with aphasia, a condition that limits his ability to speak or sing.

But Travis and his second wife, Mary, clung to the Lord as they worked to overcome his physical and spiritual challenges, as his memoir conveys in faith-affirming detail.

Near the end of “Forever and Ever, Amen,” Randy Travis delivers a message to the devil: Despite all his past sins, Travis has overcome the darkness “by the blood of the Lamb.”

“In the name of Jesus, Satan, take your hands off me,” the singer tells the tempter. “I don’t belong to you anymore. Jesus bought and paid for my soul, and I belong to Him.”