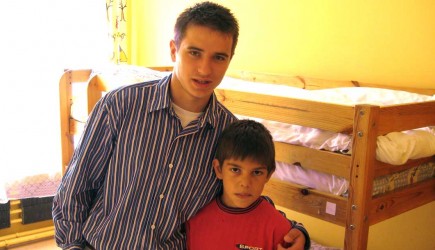 In Latvia, a camp of hope

Erik Tryggestad
Janeks Vimbsons grew up an orphan in the former Soviet republic of Latvia. Now he wants to introduce orphans in his home country to the Father he came to know in the United States.
Vimbsons came to the U.S. in 2007, hoping to be adopted by an American family. The adoption fell through, but Vimbsons was able to stay in the country and attend Coventry Christian Schools in Pottstown, Pa. He lived with a Christian family.
One year after enrolling at the school, associated with Churches of Christ, he asked to be baptized.
“He was baptized in front of the whole school,” said Eric Williamson, minister for the Chesmont Church of Christ in Pottstown. “Janeks shared in chapel how he finally knew the love of a Father, a love that he had never experienced before,”
This month Vimbsons, Williamson and a team of 20 U.S. church members will host Camp Hope, a weeklong camp for Latvian orphans in Sigulda, a town northeast of Latvia’s capital, Riga. About 80 children are scheduled to attend. Members of the Bastrop, Texas, church and Riga Center church will assist.
“We hope that not only will this help the orphans, but also the church in Latvia,” Williamson said.
Camp Hope is the first wave of a new long-term mission project to Latvia by the Chesmont church.

Eastern European Mission, a church-supported ministry, helps with similar camps in Ukraine and produced a video, “The Love of a Father,” telling Vimbsons’ story. The ministry will supply Camp Hope with curriculum and Bibles.
“Hopefully, this summer — and in future summers — we’ll teach these kids what it is to have a father,” Vimbsons said.