JERUSALEM — After a busy day that included a tour of a high-tech company in Ramallah, West Bank, and a visit to the Western Wall in Jerusalem’s Old City, I was wrapping up dinner when my phone pinged.

“Your mom just called super worried,” my wife texted from 7,000 miles away. 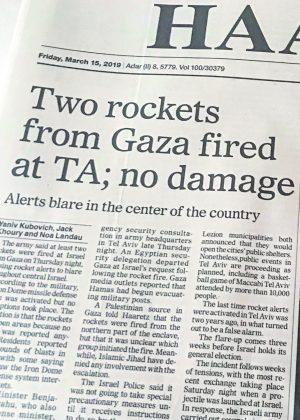 A headline in an Israeli newspaper reports no injuries or damages after a rocket attack from the Gaza Strip.

About the same time, a friend emailed to make sure I was OK.

What in the world?

As I soon learned, rockets fired from the Gaza Strip had set off air raid sirens in Tel Aviv, where I had been earlier in the week. No damages or injuries were reported, but the attack quickly made international news.

“There is really no need to panic, no need to be concerned,” said Lt. Col. (Res.) Avital Leibovich, who served 22 years with the Israel Defense Forces.

In a nation with more than a million bomb shelters, this strike — which quickly drew an Israeli military response — was no big deal. Really, Mom.

That was just one of many lessons I learned during my recent trip to Israel.

Through the American Jewish Committee’s Project Interchange, I was one of a dozen U.S. religion journalists invited to spend a week exploring political, social and religious issues in the Middle East.

One day, helicopters took our group from Tel Aviv — Israel’s commercial capital on the Mediterranean coast — to Mount Bental, a peak in the Golan Heights overlooking Syria and Lebanon. There, a military official made a case for the occupied territory’s strategic significance to Israel’s security. 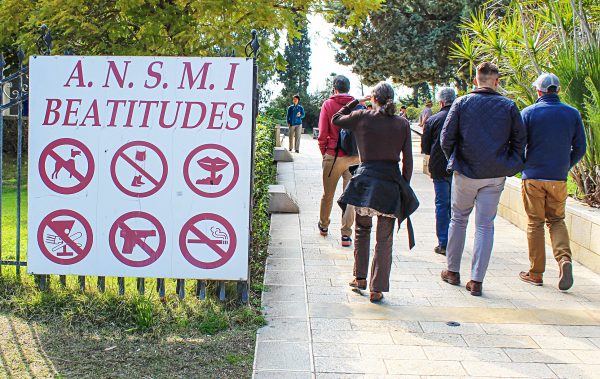 Blessed are those who don’t bring guns to the Mount of Beatitudes. A sign outlining proper behavior greets tourists at the place where, according to tradition, Jesus delivered his famous Sermon on the Mount.

That same day, we flew to the Sea of Galilee, where I could not help but envision Jesus and the apostles.

A feeling of peace overcame me. This was probably my favorite place that we experienced in the Holy Land.

Yardenit, a Jordan River baptismal site that draws thousands of Christian tourists, seemed more commercialized to me. However, minister friends who take groups there speak highly of its spiritual appeal. 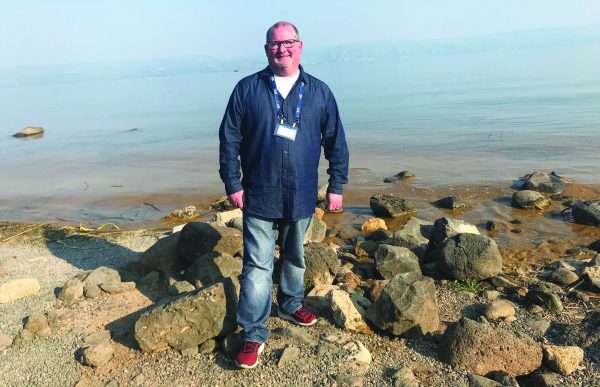 Bobby Ross Jr. at the Sea of Galilee

After a temporary grounding of our helicopters blamed on a national security alert, we headed to Jerusalem. On the bus to our hotel, we spotted a police-escorted motorcade that appeared to include Prime Minister Benjamin Netanyahu.

“Are they taking him to jail?” one of my fellow journalists quipped, referring to a corruption investigation against the long-serving Israeli leader, who was re-elected April 9.

The next morning, we drove over to Bethlehem, the city where Jesus was born that is now 90 percent Muslim and 10 percent Christian — and losing Christian residents quickly, according to our Palestinian Catholic tour guide.

The Defense Wall or Defense Fence is what the Israelis call the wall separating Jerusalem from Bethlehem.

To the Palestinians, it’s the Apartheid Wall or Separation Fence.

International media describe it as the Israeli West Bank Barrier.

To the Israelis, the wall is a matter of security that has curtailed suicide bombings that once plagued the Jewish state. To the Palestinians, the barrier is a symbol of oppression and decreased economic opportunities. 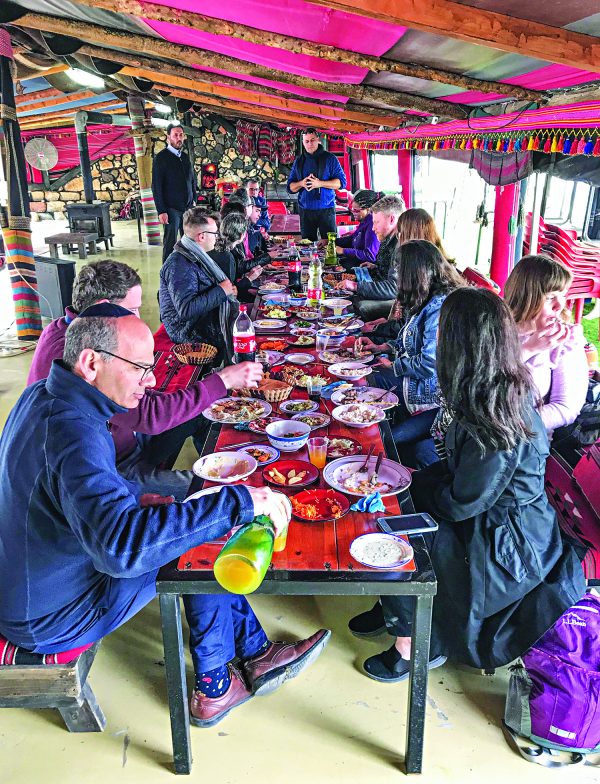 U.S. religion journalists enjoy a traditional lunch at a Bedouin tent while on a tour of Israel.

Our hosts said they hoped the Project Interchange experience gave us an enhanced understanding of issues in the Middle East and made us think about tough questions. It certainly did that, even if the answers remain elusive.

Originally, a day in Gaza was on our itinerary. But the missile fire put an end to those plans. 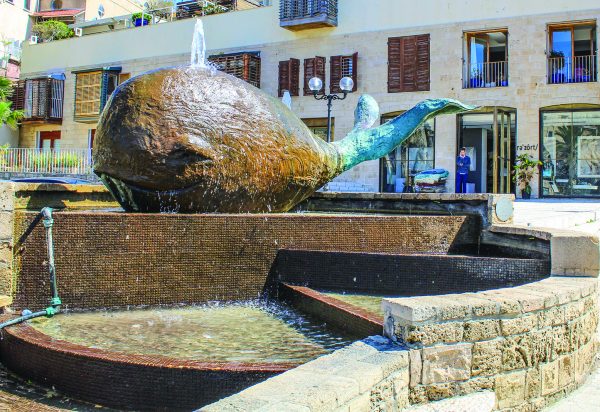 The Smiling Whale in Jaffa — known in the Bible as Joppa — was sculpted in 1983 by Ilana Goor. When Jonah fled from God, he went to Joppa and boarded a ship. After a storm, he was thrown overboard and swallowed by a huge fish.

Instead, we visited a Benedictine monastery west of Jerusalem. There, a French Catholic monk named Brother Olivier talked about the positive bonds he has formed with his Muslim neighbors in the Jewish state.

“I love Israel. We are very happy,” he said, suggesting that — just perhaps — peace is possible, even among those of different ethnicities and religions. 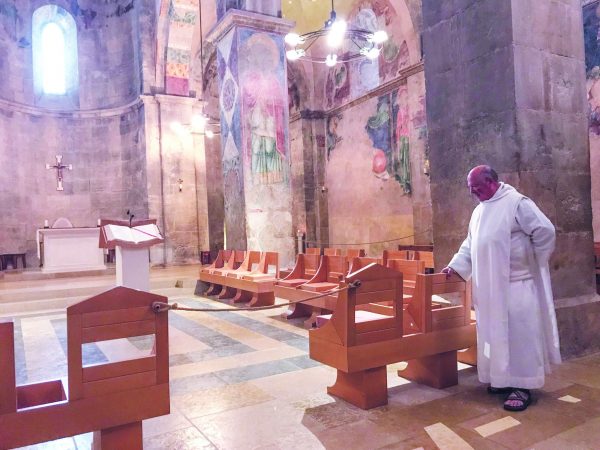 Brother Olivier, a Benedictine monk, serves in a Catholic monastery in a Muslim village in the Jewish state.