When an infant's mother died, Kentucky missionaries suddenly found themselves with a new member of the family.

TITANYEN, Haiti — Ten days after Jason and Jennifer Carroll began Christian missionary work in this Caribbean island nation in 2014, they got an unexpected gift: a newborn boy.

The mother of an infant named Edyson — “Edy” for short — had died during childbirth.

In this poor, developing nation, a can of baby formula can cost more than a day’s wage. The family asked the Carrolls to take Edy. They’re now trying to adopt the boy, who will turn 4 in September, along with his 16-year-old sister, Rogeline, who helps care for her brother.

Since November 2016, Jason Carroll has served as water project coordinator for Healing Hands International, which is associated with Churches of Christ.

Carroll and his wife, Jennifer, manage Healing Hands’ gated complex in this rural community north of the Haitian capital of Port-au-Prince. Just a few miles from the leased Titanyen facility, scores of victims of Haiti’s 2010 earthquake are buried in a mass grave.

The Carrolls, both in their 40s, previously owned a family tire business in Murray, Ky. Their son Chantry, 23, works for a nonprofit in Nashville, Tenn. Son Cole, 15, and daughter Callie, 14, are a part of the work in Haiti.

While shuttling American mission team members to various sites, the couple — who will celebrate their 25th anniversary this month — discussed their Haiti experience with The Christian Chronicle. 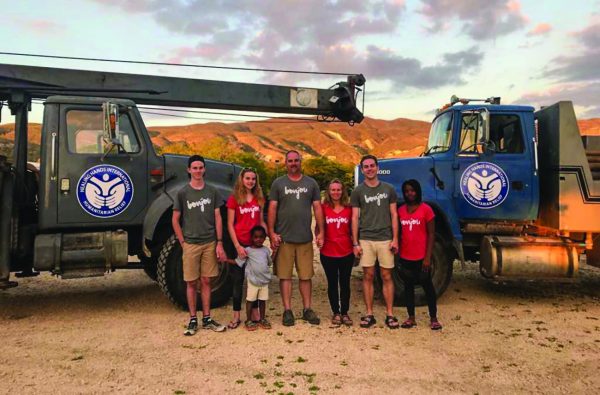 The Carroll family poses in front of Healing Hands International trucks in Haiti. Pictured, from left, are Cole, Callie, Edy, Jason, Jennifer, Chantry and Rogeline. Jason and Jennifer Carroll are working to adopt Edy and Rogeline.

Ten days after your family moved here, you had quite a life change. Can you talk about what you remember from that?

Jason: I was out in the community looking for homes to rebuild, and somebody called for me to come to the clinic there at the mission. I was really confused because I’m not a doctor or anything like that. And I went in, and they brought me this little baby that was just a few hours old. They said, “I want you to have him. His mom died.” So I called my wife.

How did you start that conversation?

Jason: I knew how she was going to answer it. I knew she would never say no. But we did work with the family, and we tried to just temporarily keep him. Because of the cost of formula and stuff like that, none of the family wanted him. After the funeral and everything, we had a meeting with the family again. They still did not want him, so we took him.

What do you remember about the experience of suddenly having another child?

Jennifer: A lot of people, they don’t have the money. They can’t nurse, and the mother has died. They’ll feed the babies crushed-up crackers and water or flour and water. That’s why so many children have malnutrition and end up dying. We didn’t want that to happen. We had grown attached to him. 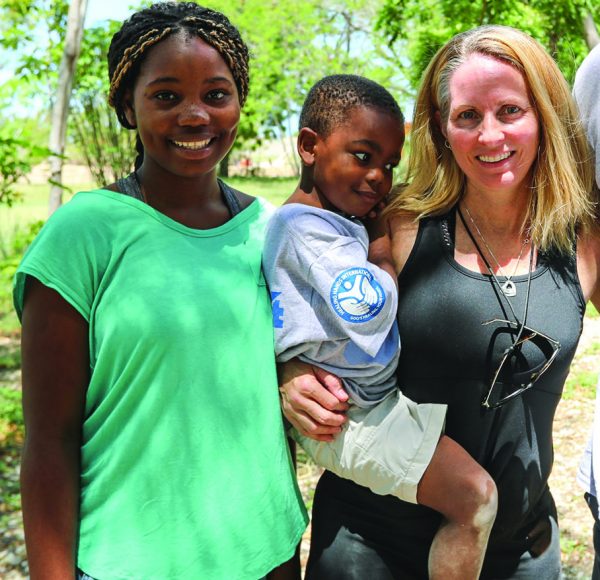 Your experience with Edy, do you see God involved with that?

Jennifer: If God hadn’t put Edy in our path, I don’t know what would have happened to him. He probably would have died or been severely malnourished now. I’m just so thankful that we did take him and that God got us there quickly. Maybe it was a good thing that we were there so soon and kind of naive to the situation, and we did say yes. I just can’t imagine our life without him.

Jennifer: He’s just a bundle of joy. He has a lot of energy. He’s very lovely and very protective. If anyone gets hurt, if we raise our voices, Edy starts crying. He runs to us. He’s just a sweet child. And Rogeline is just so helpful. I don’t know what we would do without her.

What has the experience of adding two children to your family been like?

Jennifer: It’s been challenging and hard, a lot of sleepless nights. It’s been difficult on our biological children at times but also enjoyable because they love Edy and Rogeline.

I understand that Edy speaks English, but he goes to school to learn his native Creole.

Jennifer: We do not speak very good Creole, or we speak it with a very Southern accent. He needs to learn it correctly. I want him to know his heritage. That’s one thing we’ve been really particular about, making sure that he knows who his family is, his biological family. We try to go every Sunday to visit them.

We work with him in English, with his colors, his numbers, his ABCs and all of that. But we’ve sent him to Haitian school so that he’ll learn Creole properly. He’s struggling a little bit, but he’s young enough that I think he’ll pick it up just fine. 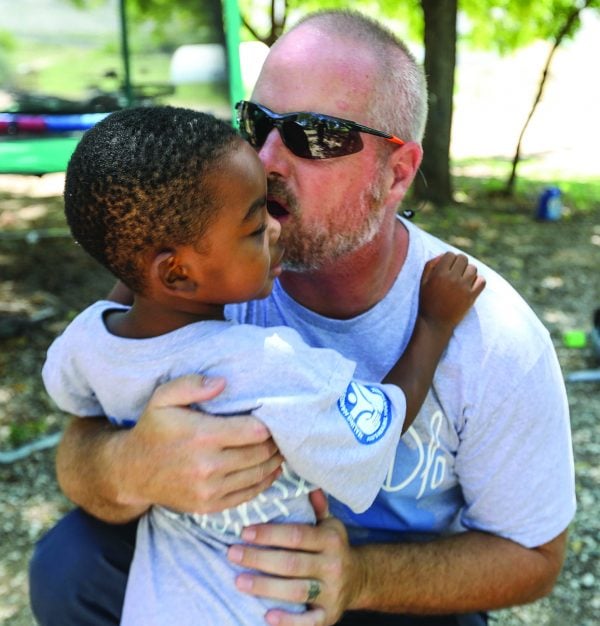 What about the water wells that Healing Hands drills — do you see them making a difference?

Jennifer: Oh my goodness. Wherever you go in Haiti, no matter where you go, you will see people walking with jugs on their head, carrying jugs, jugs on their shoulder. 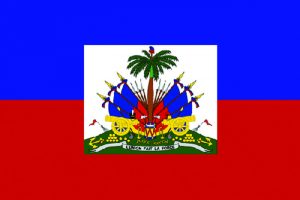 I see little, Edy-sized children carrying an oil jug, a small little quart jug of water or even a gallon or more. It’s mostly the women and mostly the girls who do that chore. You don’t see a lot of grown men doing that.

So much of their time is spent hauling water. That’s why I’m so thankful that Healing Hands is here, and I get to be a part of it, because they’re making such a difference. When we go up in the mountains, I’ve talked to people that walk hours to get water. Just to take a bath or cook some food or wash their faces, they have to walk such long distances to get the water.

Jason: It’s still a huge need. The government is not doing anything to help, so it’s left to organizations like Healing Hands. We’re still finding communities that have never had pumps before. 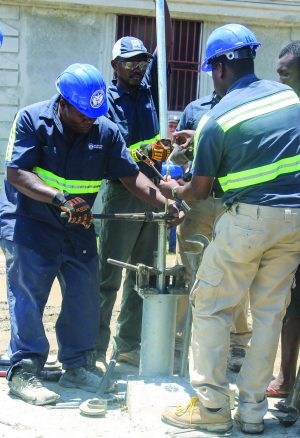 How long does it take, start to finish, to get a well up and running?

Jason: Most of the time, they can drill a well in a day. So if they drill, let’s say Monday, I would go and build the base Tuesday.  Wednesday, we would install the pump.

So it’s a three-day process?

Jason: It depends on what’s going on. Sometimes I will wait because we can build two bases in one day. So a lot of times I would wait one day, and we would go out and fix other pumps that are broken. That way we could install two bases instead of one. Because if we have a four-hour drive, I would like to get as much done as we can.

How do you even find some of the remote locations where you drill wells?

Jason: People on the side of the road stop us. That was my question with Joseph Smith, Healing Hands’ director of operations, when we started. I said, “How do you pick the sites for the new wells?” He said, “You’ll see.”

People will see our trucks with the blue Healing Hands logo, and they know that is associated with the wells. Every time we are out, they’ll come up to us and say, “We need wells here.” A lot of times, I’ll say, “Show me where it’s at.” And they’ll jump in the truck, and we’ll drive, and they’ll show me places that don’t have water. 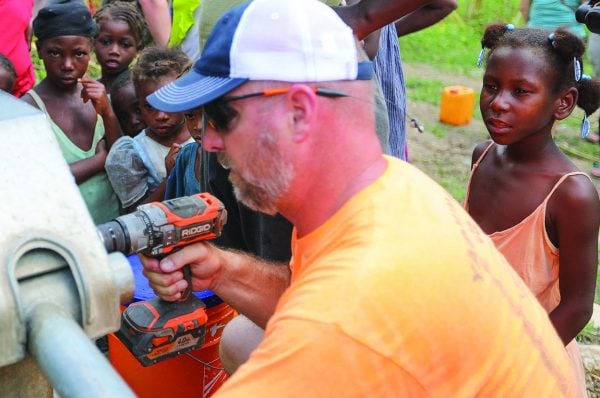 Jason Carroll places a plaque in memory of the late Ronald Kay White, a longtime Healing Hands supporter, on a well pump in the mountain village of Akdesé, Haiti.

Jason: It feels like home. I don’t think I’ve ever done anything where I got to see so much impact, but I also just love it. Even though it’s hard work, and I come home sunburned or my back’s hurting, it’s very rewarding when you see the Haitian kids.

And you know they’re going to be healthier. They’re not going to be sick all of the time. It’s really good to see the smiles on their faces and how happy they are. That’s what melts my heart. When you really think about it, you’re changing their lives for what could be generations. 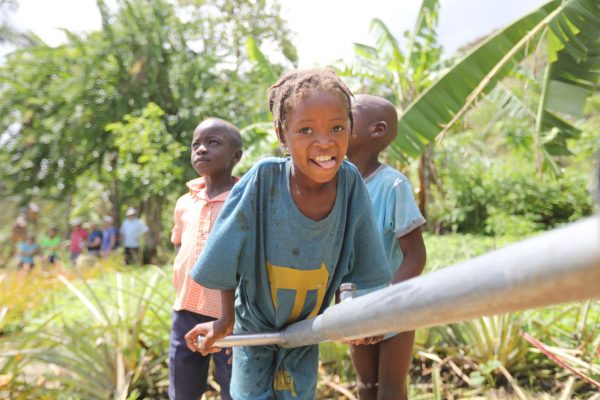 PORT-AU-PRINCE, Haiti — Laura Lee fades in and out of… 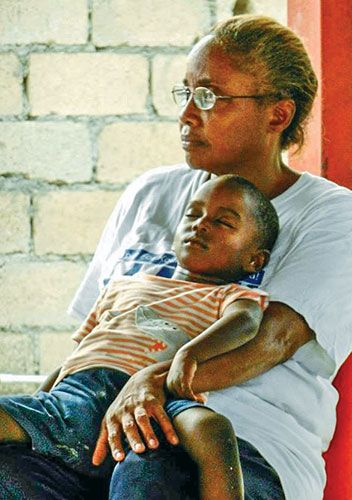