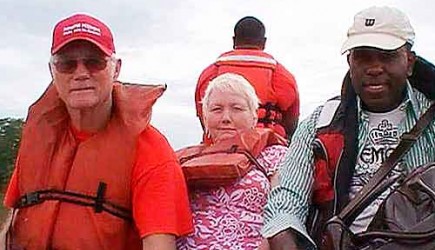 In flood-ravaged Panama, churches struggle to give aid

Erik Tryggestad
Record rainfall in the Central American nation of Panama claimed at least 10 lives, destroyed more than 2,500 homes and ruined crops, according to news reports.
Among the hardest-hit regions is Darien, an impoverished province in eastern Panama that borders Colombia. Floodwaters completely submerged villages, said Jose Calderon, minister for a Church of Christ in Sanson, a town in Darien.
Lisa Carter and other church members are overseeing food distribution in the eastern jungles of Darien, said Kim Rowell of Panamis, a church-supported nonprofit. The church members had to travel to some of the affected areas by pirogue — 40-foot long, dug-out canoes, Rowell said.
Four church members with Panama Missions, a ministry of the Childersberg Church of Christ in Alabama, were in Darien distributing gift boxes to children through the ministry’s annual Operation Christmas Joy program.
“Instead of smiling faces of eager children, we found … a desperate situation,” said Larry Brady, the ministry’s founder and director. “In fact, it was the worst situation I have experienced in my 26 years in Panama.”
The team went to the nearest town and bought food and water for about 70 families.
Heavy rains followed the church members to Torti, just west of Darien. The Church of Christ in Torti serves as a storage area for the Christmas presents as the church members distribute them in nearby villages. The team was trapped in Torti as the floodwaters rose.
“As people affected by the flooding poured into Torti, we worked with the local church to provide as much water, food and clothing as we could,” Brady said.
The Panamanian government evacuated the church members and some Peace Corps workers by boat, returning them to the capital, Panama City. Brady plans to return to Panama with more aid.
“I believe that a great door has been opened for us to present the Gospel as we demonstrate the love and compassion of Jesus,” he said.
TO CONTRIBUTE, contact the Childersburg church at (256) 378-6644 or see www.panamamissions.org or www.panamis.org.