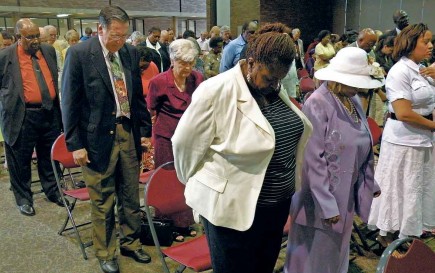 Bobby Ross Jr.
DETROIT — Ongoing efforts to improve racial unity among Detroit-area Churches of Christ are making progress, leaders say.
“I believe there is more of a spirit of respect for each other and a willingness to cooperate and participate together,” said James Snow, minister and elder for the Redford Church of Christ in Detroit.
Roger Woods, minister and elder for the Walled Lake Church of Christ, northwest of Detroit, said: “We are still facing barriers but are seeing tangible signs of progress.”
Snow serves as chairman and Woods as co-chairman for United in Christ, a group working to break down racial barriers and reach Michigan’s diverse population with the Gospel.
Each year since 2006, United in Christ has facilitated the distribution of food and school supplies to about 2,000 Detroit-area families. Eight Churches of Christ serve as the distribution points. Nine other congregations partner in the “Love in Action” benevolence work.
Every other year since 2006, the group has organized a megaworship assembly to promote unity and bring together black, white and Hispanic church members. The recent fourth Unity Event for Christ drew 1,200 church members to the Elmwood Park Church of Christ, in the heart of Detroit’s inner city and near the Eastern Market and Ford Field.
Jerry Houston, minister for the East Henrietta Church of Christ in Rochester, N.Y., and Harold Shank, president of Ohio Valley University in Vienna, W.Va., shared lessons from Romans 12:2 on the theme “A Transformative Church.”
Two groups performed: Grateful Praise from the Gateway Church of Christ in suburban Southgate and the Wyoming Concert Choir from the Wyoming Avenue Church of Christ in Detroit.
“Our white turnout was down. It has never been as strong as the black churches,” Woods said. “I had a member who just flat out refuses to go into Detroit at all.
“But overall, we are seeing individual suburban and urban churches partnering in ministry and a greater sense of unity, especially among the supporting churches,” he added. “At Walled Lake, we are seeing a growing number of African-American members of the church who had commuted back to Detroit or Pontiac now worshiping with us regularly or even placing membership with us.”
Progress on racial unity can be slow, Snow said. However, he said the church leaders — black, white and Hispanic — who have embraced United in Christ “have come to know each other on a much more personal level.”
“There has also been some cross-fellowship between white and black congregations,” Snow said. “An example of this is the youth from an inner-city congregation got together with the youth of a predominantly white congregation for youth fellowship.
“I am not sure how God will advance this much-needed movement,” he added. “But I appreciate all of the brethren in this area who have embraced the biblical mandate to be one in Jesus Christ. Our mission is to demonstrate unity in Christ so that the world might believe.”