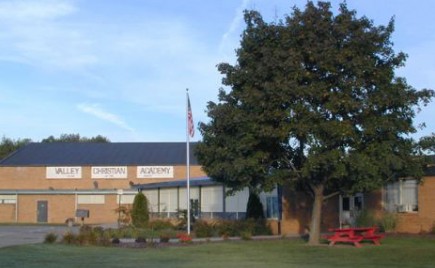 Joy McMillon
The only K-12 school in Michigan associated with Churches of Christ may be forced to shut its doors.
“We are in financial despair,” said Sam Pace, principal of Valley Christian Academy in Burton, Mich. School officials need $64,000 by the end of May to pay teachers, staff and bills. Without the money, the school likely will shut down.
The 30-year-old school is in a suburb of Flint, Mich., an auto-manufacturing town hit particularly hard by the collapsing U.S. economy.
From a high of 300 students nearly 10 years ago, the school’s enrollment numbers have eroded after a five-year wave of job losses in the flailing automotive industry and related businesses.
But a 30 percent enrollment drop in September — from 153 students last year to 103 students for 2008-09 school year — was startling, said Pace, who was named principal last July after serving for two years as the school’s Bible teacher.
Karen Kennamer, a member of the Bristol Road church in Flint, has taught at Valley Christian Academy for 25 years.
“Many people who had their children at VCA can no longer afford tuition,” she said. “One or more parents have been laid off, and so the kids have to go to public schools.”
Annual tuition at the academy is about  $4,000 for elementary and junior high students and $4,900 for high school students.
Barbara McKee, who volunteers at the school, is the grandmother of five Valley Christian graduates.
“We need this school,” McKee said. “We are a mission field here, and Satan will have won a monumental victory if our light goes out.”
Valley Christian is one of two or three secondary schools associated with Churches of Christ that could be forced to close their doors in the near future, said Philip Patterson, president of the National Christian School Association in Oklahoma City. The association represents more than 120 secondary schools in 30 states.
At the same time, church members in other parts of the country are launching two or three new schools, Patterson said. Some schools report record enrollment, though Patterson estimated that the total number of students in member schools has decreased by 1 to 2 percent in each of the past three years.
“If the county is right, you can plant (a school) today and it will do well,” Patterson said. “But out of the Bible Belt and in an economically depressed area, these schools don’t have a bright future.”
The crisis at Valley Christian has galvanized teachers, students, parents and church members to keep the school open. Facing a possible $300,000 budget shortfall for the year, officials have laid off six of the non-teaching staff, canceled some new courses and combined the first and second grades and the third and fourth grades.
Faced with additional staff reductions, Pace fired himself. Rather than let another person go, he hasn’t drawn a school salary since early October. Though he also serves as minister for the nearby Otisville, Mich., church, the congregation’s leaders have allowed him to spend his time at the school, trying to keep it afloat.
Teachers are taking extra classes and cleaning their own rooms. Parents help set up the cafeteria for lunch.
They also are contacting their churches about donations for the school.
In recent weeks, supporters have raised about $34,000 to help the school. An additional $1,000 came from a fund-raising concert featuring contemporary Christian band Remedy Drive.
“As bad as this looks, (the financial crisis) has really pulled our school together,” said Cole McClure, a 17-year-old junior and a member of the Valley church in Bay City, Mich. Along with his sister, Kayce, who is the student body president, McClure organized an all-school prayer session recently.
“We believe that God will provide,” he said, “and we’re depending on the power of prayer to keep this school open.”