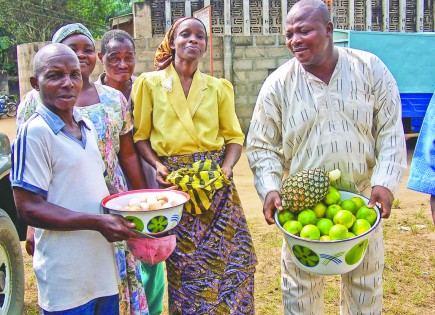 In Africa, visitors receive warm greetings — in words and song — from church members

Visit a church in the landlocked, West African nation of Burkina Faso, and you’ll likely hear this song, sung in Dagara, the local language:

Children of Christ, a visitor has come to our church. We greet you in the name of Jesus Christ!

Go to them, and let’s grab them.

Don’t worry. “Grab” basically means “shake hands,” says missionary Andy Johnson. Visitors, especially those from nearby villages, “are treated like they belong, almost like they’ve always been there,” Johnson says.

Often, they’re given a task to help ready the church for worship.

“How do you get a visitor to stick around? Put them to work!” the missionary says.

Across Africa, where Churches of Christ have grown exponentially in the past half-century, visitors are viewed as “God-sent possible converts,” says Arnold Dzah, a native of Ghana working as a missionary in the predominantly Muslim nation of Senegal.

In Senegal, visitors are introduced by name during the congregation’s announcement time, “for the whole congregation to wish them welcome in unison,” Dzah says.

It’s almost an expected treatment, the minister says. When a member of his congregation traveled to a foreign country and wasn’t greeted in such a manner, the visitor found a church elder and expressed his disappointment.

At one point in the song, members rise, seek out guests and shake hands.

“Members always sing this song with passion and affection,” Thoronka says, “to let the visitors know that we appreciate them and wish them to come back.”

In the southern African nation of Malawi, visitors come to the front of the congregation, often before the Lord’s Supper, said missionary Marc Veary. Church members introduce each visitor.

It’s a similar procedure at the Nyamue Church of Christ in Kenya, minister David Marube says. Greeters sit in the back of the auditorium to keep guests from leaving without a welcome. After services, Marube’s wife, Bassy, invites visitors to their home for lunch.

Back in Senegal, Dzah invites visitors to his office after worship for beverages and conversation. He gives them his phone number and, sometimes, walks them back home.

“This has brought many visitors back to the church, and some have become converts,” he says.

One former visitor now serves as a preacher for a village congregation.

“If we open a church door for visitors to come in, let’s close the other door to keep them from going out,” he says.