‘It’s the least we could do to try to help. God bless,’ a deacon tells a grateful victim. 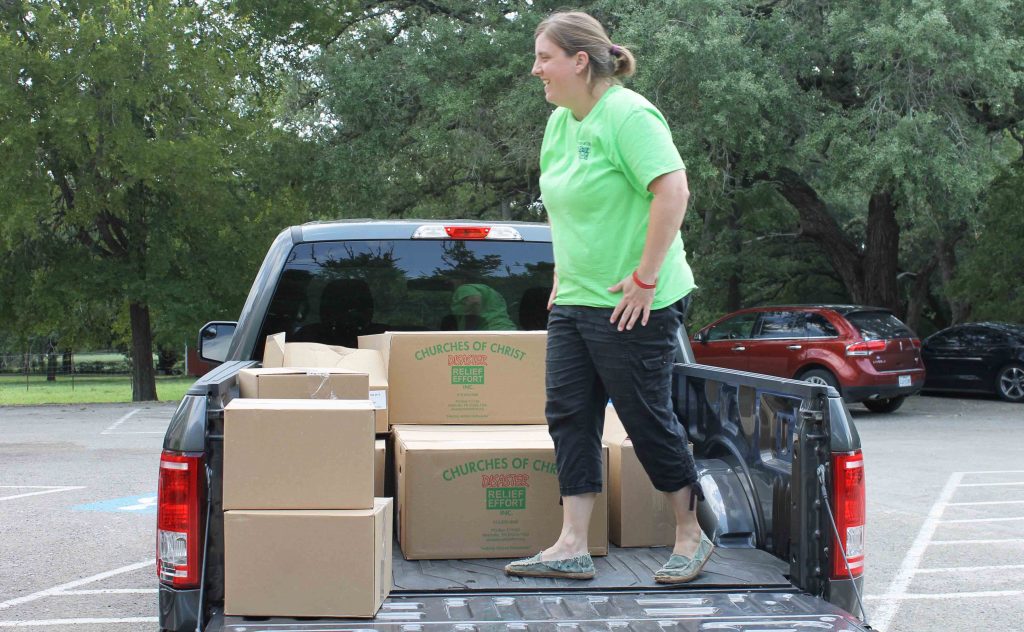 Laura Elliott, wife of preacher Scott Elliott, smiles as she loads a pickup with disaster relief supplies at the La Grange Church of Christ in Texas. (PHOTO BY BOBBY ROSS JR.)

Red X’s painted on the sides of twisted structures identify the date when firefighters checked for survivors or victims and the number found.

Bell and Vogel introduce themselves to residents digging through belongings and ask if they can use any food, diapers or supplies.

“It’s the least we could do to try to help. God bless,” Bell tells a victim who voices appreciation for the gesture.

“They’re letting everybody come in and take out what they can,” Vogel explains. “Then they’re going to tear everything out with a bulldozer.”

The record-breaking rains brought by Harvey washed away a big chunk of this Texas town of 4,600. 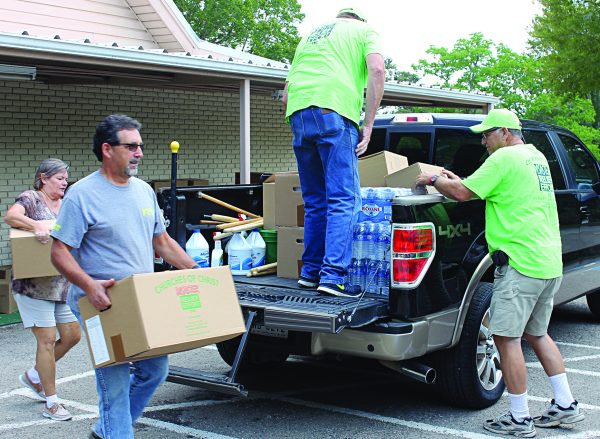 When the Colorado River overflowed its banks, more than 350 homes were destroyed in the community between Austin and Houston, said Scott Elliott, minister for the La Grange Church of Christ.

But with the tragedy came an opportunity to show the love of Jesus, Elliott said: The church immediately became La Grange’s donation hub.

“Our building has filled to capacity with donated items and volunteers,” Laura Elliott, the preacher’s wife, wrote on Facebook a few days after the storm. “It’s an amazing sight to behold. Every pew in the auditorium is also filled with donated and sorted items as well as every classroom and hallway.”

You heard there was a need and you answered the call.

Posted by La Grange Church of Christ on Sunday, September 3, 2017

The building filled up so quickly, in fact, that it became obvious a larger facility would be needed, Scott Elliott said. After three days, the church handed over operations to a nonprofit with two warehouses.

Church volunteers then shifted to a different focus of disaster relief, going into devastated areas to distribute food and other items provided by Nashville, Tenn.-based Churches of Christ Disaster Relief Effort.

By the end of last week, 27 Churches of Christ — including the La Grange congregation — had received tractor-trailer loads of Harvey relief supplies from the national organization, associate director Ken Leonard said.

That number is rising.

“Be patient if a truck hasn’t gotten to your congregation yet,” Leonard wrote on Facebook. “We’ll get to you soon. Pray for Texas and the saints that are helping us.” 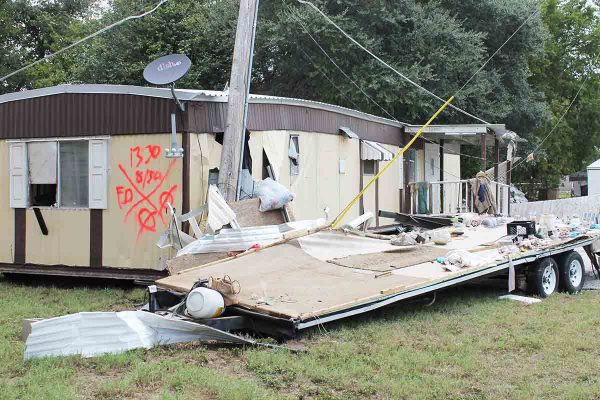 Some of the devastation in a mobile home park in La Grange, Texas.

In the mobile home park, Michael Chaney is helping a friend, Pattie Chilek.

“It could be a lot worse,” says Chaney, who escaped the floodwaters.

He pauses and nods toward his friend.

“This lady, she has nothing now,” he says.

After distributing the boxes, Bell takes off his cap. He wipes the sweat from his brow.

The day before, he had driven to Houston — about 100 miles east of here — to offer assistance to two of his four adult daughters. Both of their homes flooded.

“I tell you what,” he says, “it takes it out of you going to see so many people who are hurting.”

But amid the heartache, he has seen many people at their caring, giving best — and that inspires him.

Related: After Harvey, hope for heroes and victims

At the local Walmart, he bought $152.90 worth of cleaning supplies to take to his daughters. A woman who noticed the items in his shopping cart insisted on paying for them.

“My name doesn’t matter,” she replied. “I just want to help.”

In a public post on Facebook, La Grange minister Scott Elliott shared lessons he learned while helping after Hurricane Harvey. Read his thoughts.