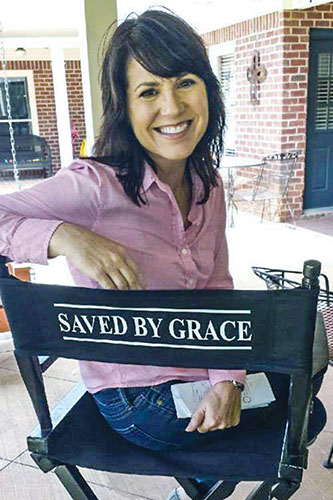 ‘I think of this as my mission work’

Actress Terri Minton prays that she can shine the light of Christ in an industry where it tends to be dim.
Rachel Pate
MT. JULIET, Tenn. — “I might have to cancel today’s interview,” Terri Minton said in a voicemail.

The reason: She had to drive to her sister’s farm so she could film herself interacting with goats, pigs, dogs and newborn kittens. A lucrative commercial for Mazda was up for grabs, and they needed someone to play a veterinarian.

The life of an actress means that “occasionally, family events have to be sacrificed and vacations missed,” her husband, David, explained, “but it’s for a good cause.”

Despite the demands on her time — feline, canine and porcine — Minton found a few moments to speak with The Christian Chronicle about her budding acting career and her faith.

A member of the Mt. Juliet Church of Christ, east of Nashville, Tenn., Minton has a growing list of credits on the Internet Movie Database, including a forthcoming role in “I’m Not Ashamed.” In the film, set for release later this year, Minton plays the mother of a Christian teen who died in the 1999 massacre at Columbine High School in Colorado.

In the pews, Minton is “very low-key about what she does for living,” added Donna Crisp, a close friend and fellow church member.

In front of the camera, the actress has what she describes as an “average, normal-people look” that lands her a lot of “girl next door” roles.

But she strives to be more than just another face in the crowd.

“I think of this as my mission work,” she said of her career. “I go to movie sets and … you’d better believe that is a mission field.”
COUNTRY LIFE AND COUNTRY MUSIC
“It was never on my radar that a girl from Mt. Juliet, Tenn., could be an actor,” Minton said.

She and her husband raised their two daughters, Chelsea and Sydney, on the same, 170-acre farm where she grew up. Minton studied fashion buying and merchandising in New York, earning an associate’s degree from the Fashion Institute of Technology before returning to Tennessee to complete her bachelor’s at Lipscomb University in Nashville.

In 1994, she and Sydney were models for the front cover of a company’s annual report. Other opportunities followed, including commercials for Dollywood’s Splash Country in Pigeon Forge, Tenn., and training videos for companies such as Coca-Cola and Cracker Barrel. 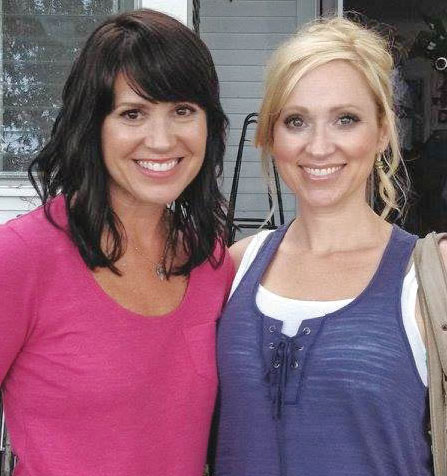 She had never acted — aside from a few plays in elementary school — but “just jumped in,” she said, and found that she “had this natural ability to be comfortable in front of the camera.”

In 1995, she appeared in a music video for Collin Raye’s country hit “One Boy, One Girl.”

“They built a forest on a sound stage,” Minton recalled with a smile. “It was like we were outside, roasting marshmallows.”

Her proximity to Nashville led to other unique opportunities. She has worked as a stand-in for country music star Carrie Underwood during rehearsals for the Country Music Association awards show. She also stood in for singer/songwriter Jennifer Nettles during rehearsals for CMA’s Country Christmas.

During one rehearsal, she introduced Steven Tyler, frontman for the rock group Aerosmith, who recently forayed into country music. During the rehearsal, Tyler “reached over and grabbed me around the waist and had me sing with him,” Minton said. “I even did the Steven Tyler scream.”
SHINING ON CAMERA
As an actress, “I actively pursue family-friendly and faith-based projects,” Minton said. “This is really where my heart is.”

She landed a small part on the TV show “Army Wives,” followed by an appearance in the 2010 film “Country Strong” starring Tim McGraw. Her scene was cut from the final version of the film.

Bigger roles followed. Recently, she portrayed the wife of a character played by Dean Cain, known for his role as Superman in “Lois & Clark,” in a film titled “A Horse For Summer.” 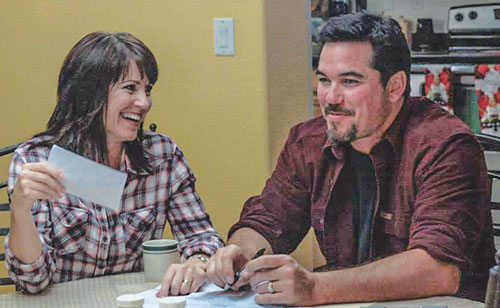 Terri Minton and Dean Cain share a laugh on the set of “A Horse For Summer.” (PHOTO PROVIDED BY TERRI MINTON)

Working on feature films — with fellow actors and crew for days or weeks at a time — is like going to camp, Minton said. She has developed friendships with fellow actors, including Leigh-Allyn Baker, who played Amy Duncan on the long-running Disney Channel hit “Good Luck Charlie.”

Minton met Baker on the set of “Little Savages” in 2014. The film, recently released on video, follows the adventures of a boy genius and his sister as they race against bullies to find a treasure hidden by an eccentric philanthropist.

Minton and Baker remain close. Recently, Minton traveled to Los Angeles for a screening of another film in which she has a role, “Saved by Grace,” starring Joey Lawrence. During the trip, Minton stayed with Baker’s family and attended her son’s ball game.

“Terri is one of those people you meet and instantly feel like you’ve known your entire life,” Baker said. “Three days of working together has led to a lifelong friendship.”

Minton prays that those she befriends will see Christ living in her.

“I believe I’m doing the things I’m doing because God has allowed me,” she said. “Some moments have been so obviously providential. I meet someone and have a conversation about God. That’s a door opened and a seed planted.”

Tracie Shannon, who co-teaches a Bible class for 11th grade girls with Minton, said her actress friend exhibits “salt and light in a work environment that doesn’t necessarily expect or promote righteous living.”

Minton’s daughter, Sydney, added, “It’s amazing that Christ’s light is being shined so brightly in an industry where it tends to be so dim.”
‘I’M NOT ASHAMED’
The title of Minton’s latest film reflects the actress’ goal for her career.

“I’m Not Ashamed” is based on the true story of Rachel Joy Scott, a student at Columbine High School and the first of 13 victims killed by shooters Eric Harris and Dylan Klebold. Minton portrays Beth Nimmo, Scott’s mother.

The film has strong focus on faith, which Minton said she appreciates.

“There have been things I’ve turned down because I haven’t been willing to do them,” she said. “I’m not willing to compromise my convictions to play a role.”

She offers that same advice to other Christians who are looking to break into the movie business.

“Always make choices based on your faith,” she said. “And just trust that if it’s God’s will, the right doors will be opened.

“Why else would I be on a movie set in L.A., California, unless it were God-ordained?”