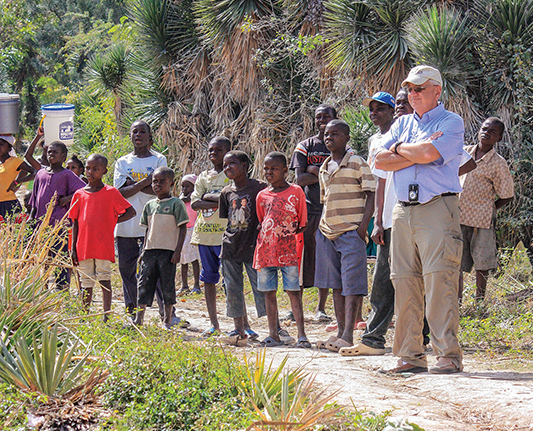 Harry Hames and a group of Haitian children watch eagerly as workers with Healing Hands International drill a new water well in a rural community near Port-au-Prince. (PHOTO BY ERIK TRYGGESTAD)

DECATUR, Ala. — Harry Hames, a mild-mannered Church of Christ deacon and retired medical equipment company executive, didn’t mean to — not really — get involved in Haiti.

He certainly never expected that his first trip — about a week after the 2010 earthquake that devastated the already impoverished country — would become an ongoing series of work visits to the country.

“I was semi-retired, and something about the news from Haiti made me wonder if our company couldn’t help,” said Hames. “A week later, I flew to Port-au-Prince with a planeload of medical equipment.”
Hames had pictured flying in with the equipment, delivering it and returning home with the good feeling of knowing people had been helped.
Long active in mission and service projects of the Beltline Church of Christ in Decatur, Hames never suspected that trip would be the first in a life-changing adventure that now keeps him in Haiti about half of most months. He works in Haiti through Healing Hands International, an aid organization headquartered in Nashville, Tenn., and through his fundraising program, Harry’s Kids.
“There are amazing stories — God stories — that happened that totally changed me as a person,” Hames said. 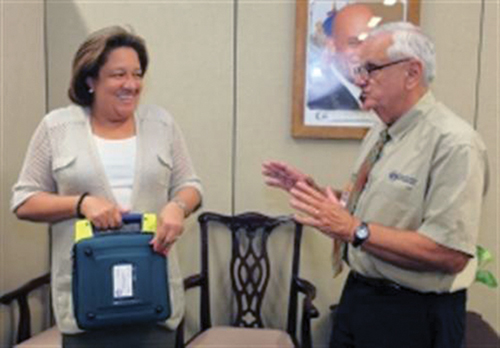 One of the most memorable, and one that led to his enduring friendship with the Haitian President Michel Martelly and his wife, Sophia, began in a temporary government building near the remains of the destroyed presidential palace. There, a cargo load of hospital beds Hames had brought was stopped with customs and airport bureaucracy. As Hames and a friend were discussing the delay, an elegant woman stepped closer.
“May I join the conversation?” asked the lady — as it turned out, the assistant to the country’s First Lady. “You have hospital beds? This Friday, we are opening a hospital, and we have no beds.”

GIFT OF A CHILD
Hames tells the story with the matter-of-fact voice a treasurer would use to give a budget report.
But there’s one story that gets him every time he thinks about it. He was working at a food distribution center, serving people who stood in line all day. Then the  food ran out. Hames looked up and saw the face of a man who was just realizing that the food was gone. The man told Hames that he hadn’t eaten in three days.
“This won’t do,” Hames said to himself, and he began digging in his backpack for his own snack bars and a can of Vienna sausages.

He followed after the man, who was holding a child by the hand, and offered what he had.
“The man, without a word, put the hand of the child in mine,” Hames said. “I didn’t know what he was doing – I thought maybe he wanted me to take his picture or something.”
No, the translator told him. Both of the child’s parents had been killed in the earthquake. The man was giving Hames the child so that the child would have enough to eat.
“I was still trying to separate myself from the situation and not get emotional,” said Hames, who had to push at his eyes to keep the tears from leaking. “But that did it. We found a place for the child.” 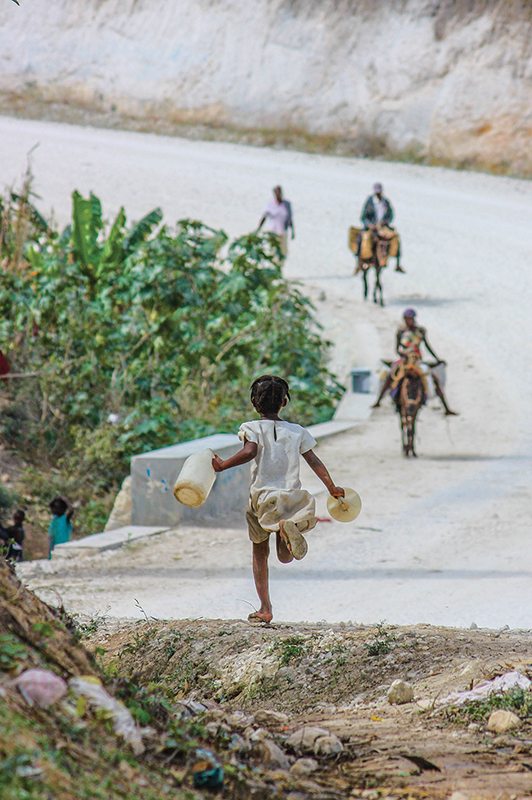 Empty water bottles in hand, a child runs near the site of a well-drilling operation by Healing Hands International near Port-au-Prince, Haiti, in 2011. The church-supported nonprofit has drilled wells across Haiti since the 2010 earthquake. (PHOTO BY ERIK TRYGGESTAD)
Harry’s Kids
Since then Hames has found a place for hundreds of children — through Healing Hands and Harry’s Kids, overseen by the Beltline church.
The work of Hames and Healing Hands International has resulted in 110 wells, four schools, two hospitals and an orphanage for 300 children. He also has helped set up a cement block factory — with tougher standards for the blocks than many of those made in Haiti — and a sewing shop to make school uniforms. The businesses provide badly needed income for men and women.
Schools and churches in Decatur and north Alabama have heard about his mission. Groups and individuals have begun drives to collect funds, shoes, toys, new clothing and books for him to take when he travels to Haiti. Others sign up as a sponsor for a child.
Sidelined since March as he recovers from open-heart surgery, Hames said he can’t wait to return to Haiti. He loves arriving at the orphanage and schools, where the kids pour out to greet him with smiles and hugs.
“My mother taught me, we can always give back, we can always help,” Hames said, relating how he’d watch his mother parcel out everything she had — $5 bills and change — so that Hames and his two brothers each had an offering to take to church before she’d take the remainder to the grocery store.
“In my four years there,” he said, “I’m getting more than I give.” 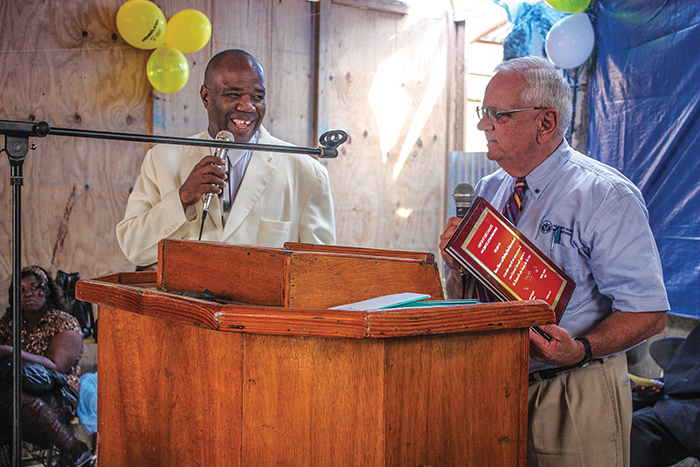 Jean T. Elmera, minister for the Delmas 28 Church of Christ in Port-au-Prince, presents Harry Hames with an award recognizing Healing Hands International in 2011.  The earthquake destroyed the church’s building, which was in the process of reconstruction. (PHOTO BY ERIK TRYGGESTAD)