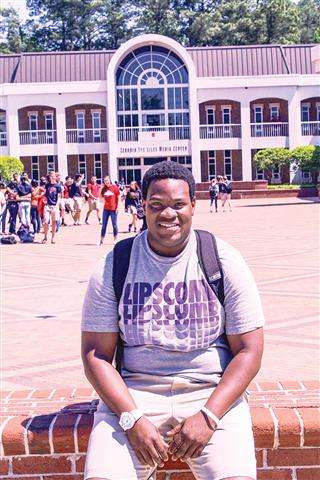 ‘I hope to give back more than I have been given’

Lynn McMillon
President Emeritus
It’s a good thing Khalil Lowry plans to major in business management when he enrolls at Lipscomb University this fall.
Making it as a hip-hop sensation isn’t in his future plans.
That much is clear from a YouTube video in which he and his adopted father, Adam Paa, sing and rap an invitation for a potential date to accompany Lowry to the junior/senior banquet at Greater Atlanta Christian School.
The song, a corny send-up of Rebecca Black’s “Friday,” was voted one of the top three invitation videos at Greater Atlanta Christian, a K-12 school associated with Churches of Christ. And it earned Lowry a date.
But he thinks he’ll stick to the business world instead of the music industry — for now.
Lowry was 5 years old and living in Abilene, Texas, when he met Paa, a student at Abilene Christian University who gave him rides to church. After graduation, Paa married Susan Jones. A few years later, the couple adopted Lowry with the approval of his mother.
The family moved to Atlanta, where Adam Paa serves as a counselor for GACS and Susan Paa works for a drug and alcohol rehabilitation center.
In May, Lowry graduated from GACS, where he played football for four years. He is an active member of the North Atlanta Church of Christ youth group, participating in mission trips and Bible studies. He volunteers with shelters and nonprofits that serve inner-city Atlanta.
Why are you a Christian?
I had always believed in God, but I did not know the impact of giving my life to the Lord. I had heard many tremendous stories of how God transformed someone’s life for the better.
When I was a freshman in high school I realized I needed to take the next step.  I knew that’s who I wanted to be in my life — forever.
How do you express your faith?
In many different ways. I go to church every Sunday. I participate in many church activities, such as retreats, Bible studies and serving the less fortunate whenever I get the chance.
I have tried to be a good example of a Christian man to the younger boys in the youth group. Last year I signed up to be in Chapel Practicum at school, and I was accepted. Chapel Practicum is a class of juniors and seniors who are considered “leaders” on our campus.
I did not think I was going to get in, but I had faith anyway. Once I was accepted, my life was changed forever.
We planned chapels for 800 students in the high school almost three times a week. None of us would have gotten through it without the grace of God.
I love proving to others that God is real by sharing stories and moments that would not be possible without him.

What experiences have strengthened your faith?

One of my first faith-strengthening experiences was when I was on a church retreat and saw an older guy crying.
This was not an ordinary guy. This was a guy who was known for his mischief and corruption outside of church. When I saw this, I instantly felt something inside of me, and I had no idea what it was.
Eventually, I realized God was filling the room with his spirit and was restoring our broken hearts again.
This experience strengthened my faith in ways I would never have imagined.

What do your non-Christian friends think about Jesus?

Honestly, I really try to associate with people that I know are Christians. I can only think of a few of my friends who are not Christians — and they never have much to say about Jesus.
The only reason those of my friends who aren’t Christians don’t believe is because of something bad that happened to them. They blame Jesus for that tragedy.
What challenges your faith the most?
My faith is most challenged when something bad happens to me, my friends or my family.
One situation that definitely challenged my faith was when I got a phone call from my mom back in Texas. She told me that my closest cousin had been taken to the hospital — and had died.
It was an utter disaster. I started to resent God. In fact, I hated him with a burning passion. I wanted nothing else to do with him.
Then I learned that my cousin hadn’t died, but had suffered from seizures and was in critical condition. When I finally got to see him in the hospital, my aunt said he could barely see anything. Yet, I was standing 10 feet away from him, and he saw me. He said he liked the cross on my necklace.
My hate went away. It was amazing because I could tell God was working in that situation.

What advice do you have for next year’s senior class?

Invest in godly friendships. Get involved in service projects with those friends to help build those friendships while you help others.
The most important suggestion I have is to read the Bible. No matter how I’m feeling, when I read my Bible I always feel better. The Holy Spirit is always working. You can’t let people or school get in the way of you finding your life purpose through Christ.

Do you have a favorite Scripture?

Jeremiah 29:11: “‘For I know the plans I have for you’, declares the Lord, ‘plans to prosper you and not to harm you, plans to give you hope and a future.’”
This verse always speaks to me because it just proves that he will always be with you — no matter what you are going through.
I have been at a place when I felt like I was going through life alone. Then my youth minister gave me this verse, and my mind set was completely transformed into a mindset that Jesus would have.
I recommend this verse to anyone that is struggling with doubt or negativity.

How do you hope to fulfill your Christian mission in life?

I hope to give back more than I have been given.
My passion is to serve underprivileged kids who may not have a father figure in their lives. I want to be a good example of what a Christian man is supposed to look like.
My mission is to be like Jesus.