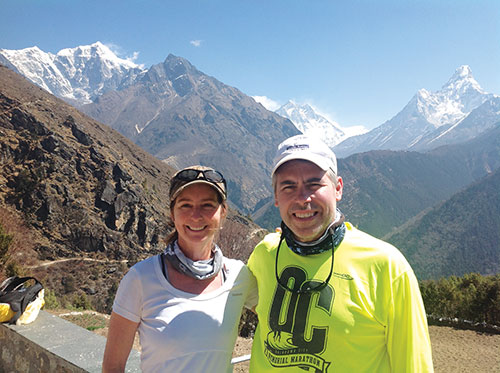 ‘I found in climbing the freedom that God gives’

This was supposed to be an interview about climbing Mount Everest.


It’s not.
Instead, it’s about faith and family — and even bigger mountains that we all must climb.
At age 12, Valari Wedel’s father gave her a book, “Endurance: Shackleton’s Incredible Voyage.” She was hooked. Now a member of the Memorial Road Church of Christ in Oklahoma City, she has scaled Denali in Alaska — at 20,322 feet, the highest mountain in North America — Argentina’s 22,841-foot Aconcagua, Tibet’s 26,906-foot Cho Oyu and many more.
As a young wife and mother, she struggled with her faith until her training brought her face-to-face with the reality of God.
“I was on Mount Orizaba in Mexico,” she said, “when I began to open my heart to how God was using training and climbing to shape my relationship with him.”
In April 2013, she and her husband, Greg, landed among the mountains in Nepal. They hiked 12 days to the Everest Base Camp, elevation 17,598 feet. From there, Valari Wedel made several preparatory climbs — anticipating the fulfillment of her dream to reach the highest point on the planet, 29,029 feet.
During the climb, the couple received word that one of their daughters had an unexpected recurrence of cancer. The next morning, they headed for home — with no regrets, she said.
Along with her outdoor activities, Valari Wedel teaches Bible school and travels to Central America on medical missions with ministries including Health Talents International. She and her husband, married for 30 years, have three daughters: Colby, 26, Jessie Riley, 25, and Abby, 22.

Why did you want to climb Mount Everest?
I have long wondered about the commitment, courage and strength that is necessary to climb to the top of the world and survive. I want to be that person. My life was devoted to my husband and young family, but as my children grew I found time to start climbing. At first I did not consider it — too much money, too much time, too much risk, but there was always this place in my heart and mind that said, “Why not?”

The time was right for me to test myself and to fulfill a dream.

How do you see God working in your life for this undertaking?
It’s really fascinating for me to look back over the past 10 years or so and see how God has used climbing to set my current faith journey.

I had a fairly typical spiritual journey as a child and through young adulthood. I attended church every week and learned the great stories of the Bible. As I matured, I began to question God’s commandments. I felt he was defining my life by rules and restrictions, listing the things that I could and could not do.
I continued to live in obedience, but I was lacking a personal relationship with him. There was a disconnect, and I lacked spiritual passion.
Then, in God’s wondrous way, I was able to connect the freedom I found in climbing to the freedom that God gives in Jesus.
I have learned through climbing that I needed the discipline of study and boundaries to find the freedom to live in him and choose him. It has been a long and slow journey, but the Lord has patiently taught me.

What fears do you have to overcome?
So many! Just for starters, failure, lack of preparation, disappointing my family and myself, weakness, giving up, succumbing to the pain, getting sick. For me, being afraid is really not the issue because life is full of fears that paralyze and debilitate. It is my ability to move through the fear that will define who I am.

Describe the experience up to the point when you came home.
I remember the laughter of children from houses as we moved through the villages. I remember lying at night in my tent at base camp and hearing the ice beneath me cracking and groaning.

I remember turning the corner of the mountain trail and looking down into a valley lush with trees, an indescribable blue sky, heavy misty fog and yellow-, blue- and green-roofed houses clumped together in a small village. I remember the warmth from the wood stoves each night at the tea houses on the way to base camp and being so grateful for them.
I remember the sense of accomplishment and joy as I made the first acclimatization climb at more than 20,000 feet. (I was suffering from asthma and pneumonia and was sure that I was losing my chance for an Everest summit.)
I remember watching the sunrise, drinking warm coffee in temperatures so cold that there is no sound, and praising God for his glory and beauty.

What was it like to receive word in Nepal of your daughter’s illness?
I cannot put those thoughts and feelings into words or yet talk about them.

In April, an avalanche on Everest killed 16 Sherpa guides and raised concerns about tourists climbing the mountain. Your thoughts?
My first thoughts were of grief. I knew that every Sherpa had family that also worked on the mountain. They are a close community and so many lives were devastated.

As a climber I began to feel guilt, knowing that those men had not chosen to put their lives at risk.
They were not following a dream. They were there to make a living for their families. They were required to move through the deadliest part of the mountain nearly 20 times so that climbers could move through the same areas only a few times.

Do you plan to try again?
I recently completed nursing school, and now I am working with the intent of using my nursing skills in the mission field in the near future.

I will always dream of Everest. It is a part of me that I cannot let go, but for now I have my heart open to God’s will and his plans for my future.