The damage is catastrophic, and it’s not over yet.

That’s the message from Christians in the Central American nation of Honduras who have endured two powerful hurricanes — Eta and Iota — within two weeks.

“The overall needs are going to be great. It will take a while (once it finally stops raining) for those needs to be assessed,” said Phil Waldron, co-founder of Mission UpReach, a ministry associated with Churches of Christ in the city of San Pedro Sula.

The first hurricane, Eta, made landfall Nov. 3 in Nicaragua. As the storm moved westward through Honduras, thousands of people took to their roofs. Eta, then the strongest storm of this year’s hurricane season, flooded the terminal of San Pedro Sula’s international airport at levels higher than than Hurricane Mitch in 1998, Waldron said. The Honduran government had cleared a portion of the airstrip for relief flights.

Then came Iota, which made landfall on Nov. 16 about 15 miles from where Eta struck. That’s unprecedented, The Washington Post reported.

“These facts emphasize the size and complexity of the relief that is going to be needed,” Waldron said. “Thousands of families in the Sula Valley have lost everything.”

In Nicaragua, government officials said that at least 48,000 people were displaced by Iota, said workers with Misión Para Cristo, “which adds to the number who lost or had to leave their homes last week. Roads are washing out, mudslides are closing roads, and bridges are out, causing communities to be isolated.”

The ministry, which also is associated with Churches of Christ, already had made relief trips to help victims of Eta, as seen in this video narrated by church member Montenegro Hamilton:

I wish I could put every picture and everything we did, but then that would be a full movie!!!! Here is just a little bit of our trip to wiwili this last Thursday, To God be the glory for all of this help and thank you each one of you guys for making this possible

“We are thankful to all that have reached out with your prayers, encouragement and support,” said Benny Baker, executive director of Misión Para Cristo. “Please continue your prayers for those in the path of the storm and for our staff in Nicaragua and Honduras as they continue to respond to Eta and now wait to see what will be necessary in our response to Iota.

“Also,” Baker said, “there is another possible storm in the Atlantic”.

A team from the Baxter Institute, a ministry training school in Honduras’ capital, Tegucigalpa, planned to travel to northern Honduras to assist with relief efforts.

Mission UpReach and other ministries, including Healing Hands International, are collecting funds for relief efforts. 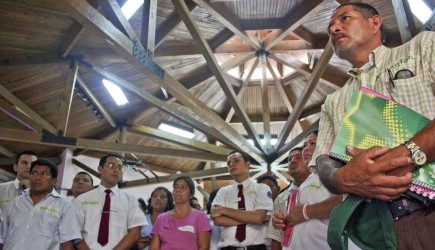 DOLORES, Honduras — It wasn’t exactly the World Cup, but a…

Dan Coker, a longtime missionary and ministry trainer for Churches…