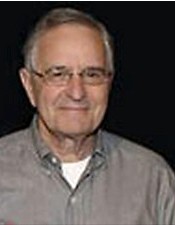 Bailey McBride
You never know how hard it is to be a father until you are facing a screaming 2-year-old or a rebelling teenager.
My father was a good man. He enjoyed giving gifts to Mother and me. He was easygoing, enjoyed life and struggled in my early years to make a living.
He came from a large Irish family with an alcoholic father. When he finished eighth grade, he worked to support his mother and his 11 siblings.
At 18 he met my uncle and cousins working in the wheat and fruit harvests of Colorado. As winter came, my dad traveled with my uncle and cousins and eventually went home with them to Amarillo, Texas.
My dad and mother were married in 1930. Dad came from a family only concerned with daily bread and surviving. God was never mentioned at his home. My mother’s family, the Baileys, set out to convince him that he was hell-bound if he were not baptized. They created a wall that would take nearly 50 years to crack.
I added to that barrier as a teenager, determined to make him see the light. Although he had little interest in church or God, he never discouraged our faith.
My dad, a handyman and jack-of-all trades, repaired cars, plumbing, furnaces, roofs and light fixtures. He asked me to help, but became impatient with my incompetence. So he soon stopped trying to teach me the skills he enjoyed.
He hunted and fished, but I had severe allergies that made me sick when I was outside for long. My sister, Claudia, 16 years my junior, had my father’s disposition and worked beside him on every project.
Dad and Claudia were great companions. When he died 15 years ago, she wrote a stirring tribute to him. She described his sense of humor, his work ethic and his regret that sundown, day after day, brought his gardening to a halt. She described him leaning on his hoe and surveying the perfect rows.
My dad had no opportunity for education, but he believed in it firmly. I remember at enrollment time he always said, “Take all the math you can. Math is the most important thing you can learn.” Following his advice, I took math, chemistry and physics throughout high school, thinking I might be an engineer.
He did not understand why I majored in English in college, but he supported me financially as an undergraduate and emotionally throughout my graduate work. His admiration of my writing and achievements always gave me a special thrill.
Dad was not talkative and not very emotional as I was growing up. I was sure he never thought I did anything right or was a very good son.
Looking back, I know that he did not understand me any more than I understood him.
Fortunately, we had time to know each other and to value each other.
I spent the afternoon before he died with him in the hospital. We talked about my mother (his wife), his daughter (my sister) and my children (his grandchildren). He begged me to never put him in the hospital again, just as he begged the doctor to let him return to the retirement center. The doctor relented.
Back at the retirement center, we talked randomly about life, work, responsibilities to wives and children, our love for his mother, who had died when I was 18. He made me promise that I would go home and rest.
We hugged and kissed as I prepared to leave. As he was sitting in his recliner preparing for bed, his heart gave out. I found him in the chair — gone.
My grief for Dad was deep, but I knew where he was. After years of resisting God’s call, he had begun to study a Bible my three children gave him for Christmas when he was 65. They begged to read the Gospel of Luke, and he started there and read all the New Testament.
When he came for my second daughter’s wedding after he turned 75, he went forward Sunday morning and confessed his belief in Jesus. My dear friend Howard Norton baptized him that afternoon.
The journey had been long, but we all celebrated to know he was God’s.
My dad was not perfect, but he had a heart for me that shaped me.
I am not a perfect dad — probably not as good as my father. But my heavenly Father has sustained me. Melissa, Lynette and Michael have survived.
Abba Father, thank you. Bless all dads.