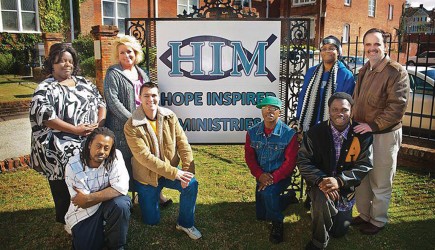 Anthony Rhoads
MONTGOMERY, Ala. — Steven Edwards was having a bad week.
The 24-year-old, with big muscles and long dreadlocks, had dodged bullets before — an occupational hazard for a drug dealer.
But when he found himself on the receiving end of gunfire three times in almost as many days, that was enough, he decided.
“It was a one-way road that was very dark,” he said. “I was living the street life very heavy, and I had no values at all in my life. The decisions I was making … were getting me nowhere but back to where I started from, which was the bottom of the food chain.”
To make matters worse, Edwards had sole custody of his 9-year-old son, whose mother had abandoned him.
Edwards knew he had to turn his life around — not only for himself but also for his son.
“I felt like I was doing the devil’s job and what he planned for me instead of God’s work,” Edwards said.
Then he found hope — Hope Inspired Ministries, to be exact. The nonprofit, known as HIM, helps the chronically unemployed find jobs in in this city of 208,000 souls.
HIM instructors teach general education courses, life skills and spiritual development — all with the goal of transforming lives and breaking the cycle of poverty and crime.
Edwards lacked direction in his life when he came to HIM, “but he embraced the program,” said Michael Coleman, the program’s director and a member of the Vaughn Park Church of Christ in Montgomery.
Though many would rather hide from Edwards than hire him, Coleman saw past the intimidating muscles and dreadlocks.
Instead, Coleman saw a person with intelligence, charisma and a desire to learn.
When considering program applicants, HIM staff members try to see them “through the eyes of Jesus, to love people in an equally undeserved way,” Coleman said. “I try to funnel to them what God gave to me.”
FRUSTRATION AND TRANSFORMATION
Coleman, a 21-year Army veteran, launched Hope Inspire Ministries two years ago.
The ministry was born out of the frustration he experienced in urban ministry.
“I really felt led to work with inner-city programs,” said Coleman, who preached in Fort Deposit, Ala., for five years and spent 18 months as the head of a benevolence ministry. “But I became frustrated because of the lack of transformation. No matter how much help came, there was no change.”
He used the money he had saved for retirement to start HIM. He modeled the program after HopeWorks, a nonprofit begun by Churches of Christ in the Memphis, Tenn., area.
The Vaughn Park church supports the work, which has “an army of volunteers,” Coleman said — many from the congregation and the Landmark Church of Christ, also in Montgomery.
The program includes a 13-week course. The first six weeks focus on job and life skills.
“All our curriculum is rooted in biblical principles,” Coleman said. “I personally conduct a daily devotional with our students, and we have a more advanced spiritual training session once a week.”
Beginning in the seventh week, students work two days per week as unpaid interns for local businesses.
“We walk them through the process but don’t carry them,” Coleman said. “We will help them overcome their obstacles. We help turn them in a positive direction so they won’t retreat back into the chaos.”
HIM works with multiple organizations as it seeks to transform lives — including government agencies, parole systems, homeless shelters and the Salvation Army.
“We’ll partner with anybody who is geared to helping the poor through transformation,” Coleman said. “I think collaboration is key.”
LOSING A CHECK, GAINING A JOB
But HIM does not ask for money from government agencies, Coleman said.
Ideally, neither should its students. One of the ministry’s goals is to free people from the system of dependence that often results from reliance on government funds.
One example is Luventhia Moore, a 23-year-old woman who was misdiagnosed with schizophrenia. The diagnosis caused her to lose custody of her 2-year-old son but meant a regular disability check from the government.
“She was drawing a check for schizophrenia, but she showed no signs of schizophrenia,” Coleman said. “Everyone told her to not go to work because she would lose her check.
“It took me a lot of time to break through to her that there is not enough government assistance to get her where she wanted to go.”
Moore stayed in the program and now has a job — and dreams.
“My main goal is to get my son back,” she said in a video testimonial for the ministry. She also wants to earn a college degree and work as a veterinary technician.
Through the ministry’s spiritual emphasis, she learned that “Jesus loves you for who you are and what you’re about. No matter what, he’s always your friend.”
‘WE DON’T SUGARCOAT IT’
For each of the ministry’s success stories, there is an equal dose of disappointment. The most recent class started with 12 students but then dropped to six. Many are unwilling to take personal responsibility and be held accountable for their actions — two factors that are key to completing the program.
“We don’t sugarcoat it,” Coleman said. “It’s going to be hard. As long as they keep trying, we have tons of mercy and tons of grace. But if they quit trying, we have to break ties.
“When you love somebody, love is more than acceptance — it’s accountability.”

‘NOW I AM ON A STRAIGHTENED PATH’
Instead of dodging bullets, Steven Edwards bangs out dents.
During his time in the HIM program, he interned with an auto body shop. He completed the program and earned his high school equivalency degree.
Now the former drug dealer, whose life was nearly a car wreck, wants to fix cars for a living. He’s a straight-A student at Trenholm State Technical College in Montgomery and dreams of one day opening his own business.
“As I look back at my past and survey my future, I now understand it is my duty to break my family’s generational poverty and start a pathway to prosperity,” Edwards said in his HIM graduation speech. “Now I am on a straightened path.”
For Coleman and all those who share the mission of HIM, “it’s hard work, it’s intense work,” he said. But “you don’t do it for the numbers or results.”
Instead, “you do it for the transformation, to help them live a life that God wants them to have.”
Edwards sees that transformation in his own life.
“I would like to thank almighty and powerful God,” he said, “for guiding me down the road to righteousness.”
FOR MORE INFORMATION, contact www.hopeinspired
ministries.org or [email protected].