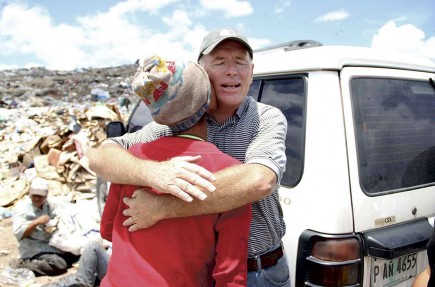 Honduras missionary recognized as ‘servant to the poorest’

Staff reports
TEGUCIGALPA, Honduras — The newspaper headline reads “Misionero de los más pobres,” or “Servant to the poorest.”
The words describe Marc Tindall, a missionary in this Central American capital. Tindall and his wife, Terri, work with Casa de Esperanza (“House of Hope”), a children’s home.
The couple also works alongside volunteers from the U.S. and Hondurans to build homes for families in need.
In the past year, their ministry oversaw the construction of more than 90 houses, plus a church building, a Sunday school classroom, a feeding center and two playgrounds, Terri Tindall said.
The Tindalls feed and serve Hondurans living in a garbage dump. The couple’s ministry provided food for 5,000 families in 2011. Partnering with U.S. Christians, the couple hosts an annual “Jesus banquet” at the dump, setting up long tables and treating hundreds of the poorest of the poor to a feast.
In 2009, the First Lady of Honduras made an unannounced visit to the banquet. In front of TV cameras, she talked about the plight of the poor and thanked the missionaries for their work.
Recently, the Honduran newspaper El Heraldo profiled Marc Tindall, calling him one of the most generous people in Honduras.
“Marc Tindall is an American who dedicates each minute of his time to offer a roof and food to deserted children and families in extreme poverty,” the newspaper said.