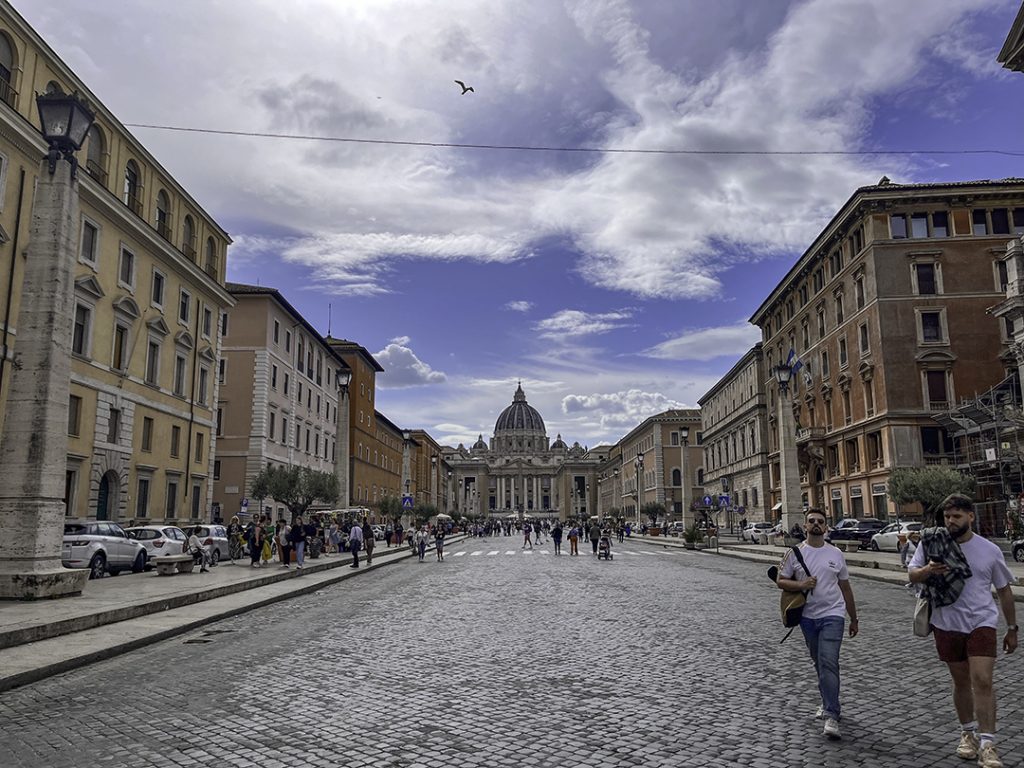 A quick trip to the world's smallest country, the Vatican, prompts thoughts of early Christian martyrs, Ukrainian refugees and our shared desire for heavenly rest.

VATICAN CITY — Staring at my phone in the middle of St. Peter’s Square, I got one of those pop-up notifications.

It was an email from Becky O’Neal. I grinned because I knew what it was — the weekly roundup of prayer requests she sends from our Bible class at the Memorial Road Church of Christ.

“It must be 10 a.m. back home,” I thought as I looked around Bernini’s colonnade — majestic pillars that encircle a 4,000-year-old obelisk that was seized from Egypt by the emperor Caligula. 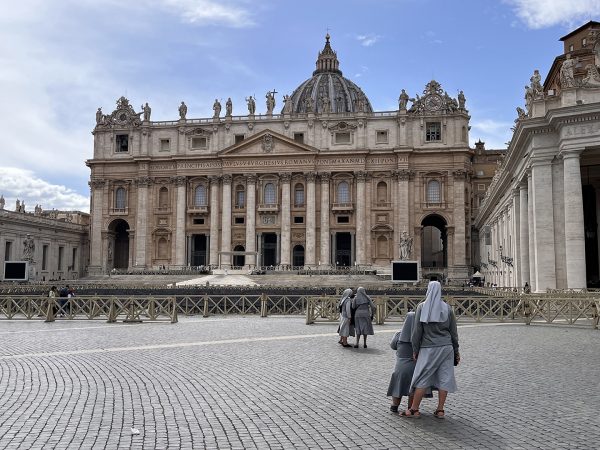 A group of nuns admires St. Peter’s Basilica at the Vatican on a Sunday afternoon.

Some 5,500 miles away in Oklahoma, my wife probably was leading a devotional group in my teenage daughter’s class. My youngest was in Journeyland. Nana and Papa were in town helping out, most likely visiting the Empty Nesters class, where they’re considered regulars. (“We sure love your in-laws!” I’m told routinely as I pass members of that class in the hall.)

Suddenly, I longed for home.

I thought about sitting down in one of the white folding chairs set up in front of St. Peter’s Basilica and streaming my church’s worship service — in the middle of Vatican City. But I didn’t have the battery life.

It was the tail end of a two-week reporting trip to Ukraine and Eastern Europe, covering the impact of the war on our brothers and sisters in Christ.

Related: ‘This year has changed everything’

I was exhausted, but I knew I’d kick myself if I didn’t make the trip to see the Holy See — another name for this city state that’s roughly one-eighth the size of New York’s Central Park.

I had taken out my phone to confirm that I had, in fact, crossed the international border and was now standing in the smallest country on earth — albeit one with tremendous global influence as the heartland of Catholicism, home of the Pope.

I met some tourists from Chicago who asked what brought me to Rome. I told them about my job, and they asked if I had been among the hundreds who gathered here earlier in the day to hear the Pope’s message. He had mentioned Ukraine.

I told them I had worshiped in a much smaller venue — the meeting place of the Viale Jonio Chiesa di Cristo (Church of Christ) in Rome. 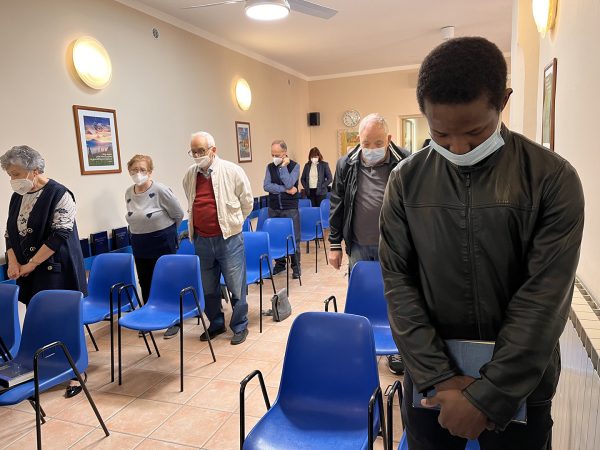 My friend Dr. Vittorio Vitalone had invited me to preach for the congregation. I showed them photos of the Ukrainian Christians I had encountered who now were living as refugees in Romania, Slovakia, Poland and in the western parts of Ukraine itself. 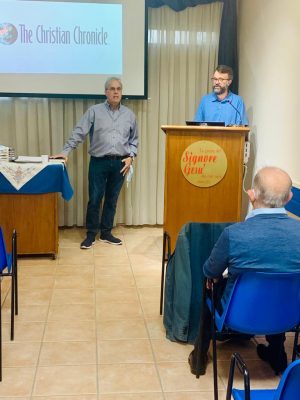 Erik Tryggestad speaks to the Church of Christ on Viale Jonio as Dr. Vittorio Vitalone translates his sermon into Italian.

They long for home, but they are making the best of a terrible situation. Our associate editor, Audrey Jackson, stayed in Sopot, Poland, when I left for Italy. As I preached in Rome, she snapped photos of three Ukrainians giving their lives to Christ in baptism.

After worship I spoke with family members of a minister in Montana and met a recent convert from the West African nation of Burkina Faso, a place I visited in 2009. Far from home, he had been looking for a family of faith that sought to serve God without man-made creeds. He found it with the Chiesa di Cristo.

Vitalone and his wife, Tonia, treated me to lunch at a small trattoria (family-run restaurant) where I had probably the best ravioli I’ve ever tasted. There are some great Italian places in Rome, turns out. 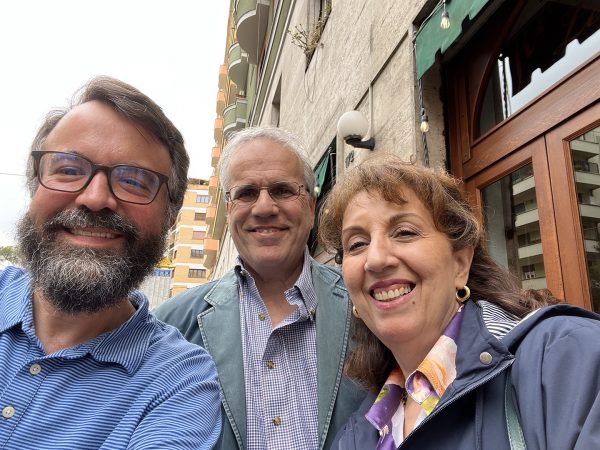 I watched the playback of Pope Francis’ Sunday morning address on the Vatican’s YouTube channel. He talked about the sheep who follow the Good Shepherd described in John 10. They know their shepherd, they listen to his voice and they follow. He stressed the importance of listening to each other.

As I reflect on that now, I think about our brothers in Russia, about how long I waited to reach out to them after the conflict with Ukraine started. Now some of them are leaving their homeland — rather than fight in a conflict they don’t support. 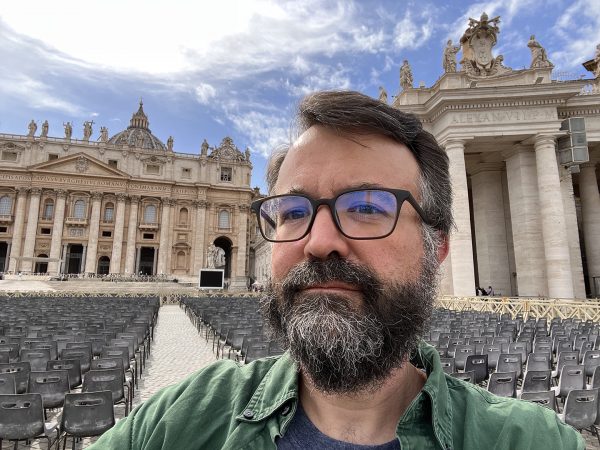 Erik Tryggestad stands outside St. Peter’s Basilica at the Vatican.

Although I couldn’t stream my church’s service, I did listen to the daily Scriptures in my “Bible Recap” plan. It was a collection of David’s psalms, including Psalm 36: “How priceless is your unfailing love, O God! People take refuge in the shadow of your wings.”

I listened as I walked around St. Peter’s Square — where horse-drawn chariots once raced, where the emperor Nero executed Christians nearly two millennia ago. 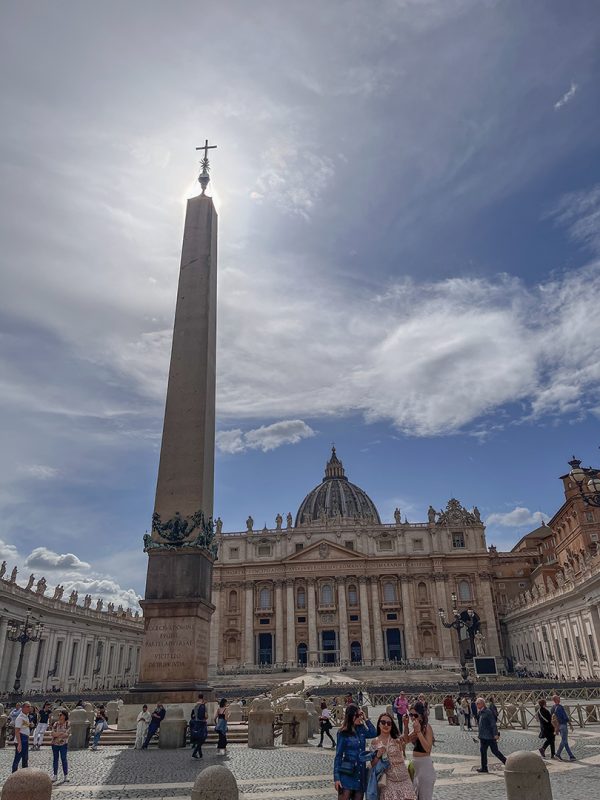 The sun sets behind the obelisk in the center of St. Peter’s Square. 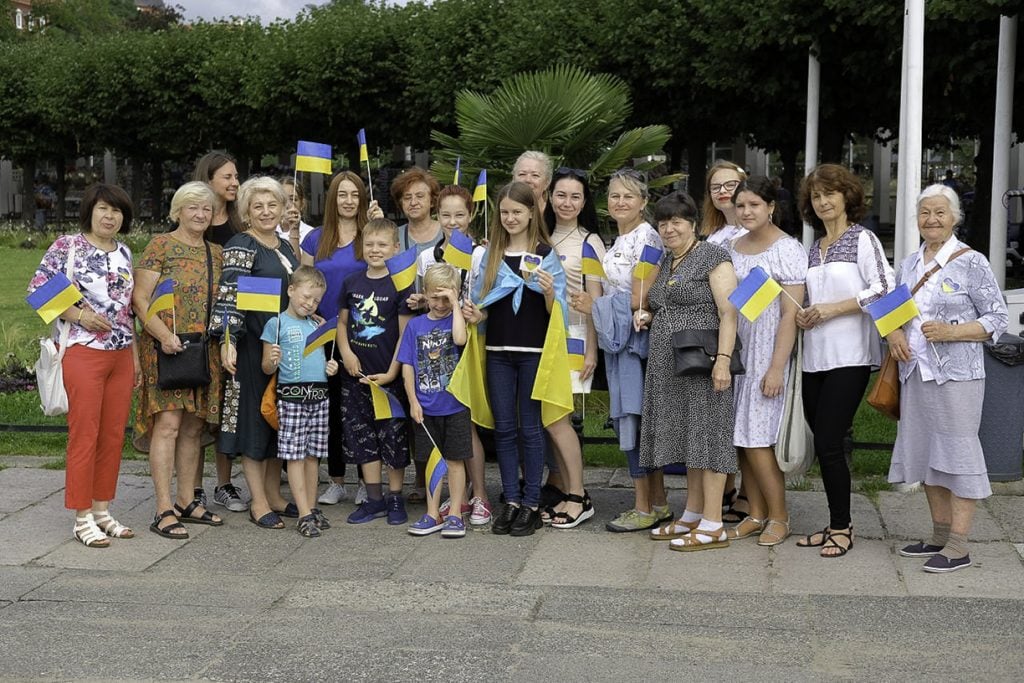 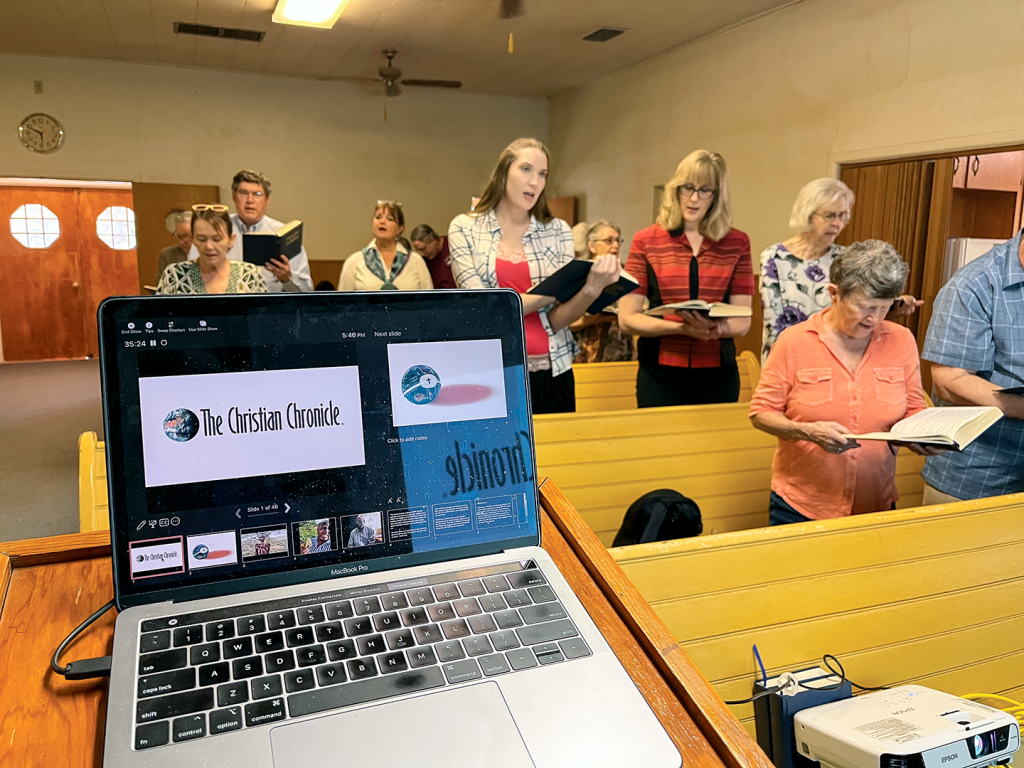 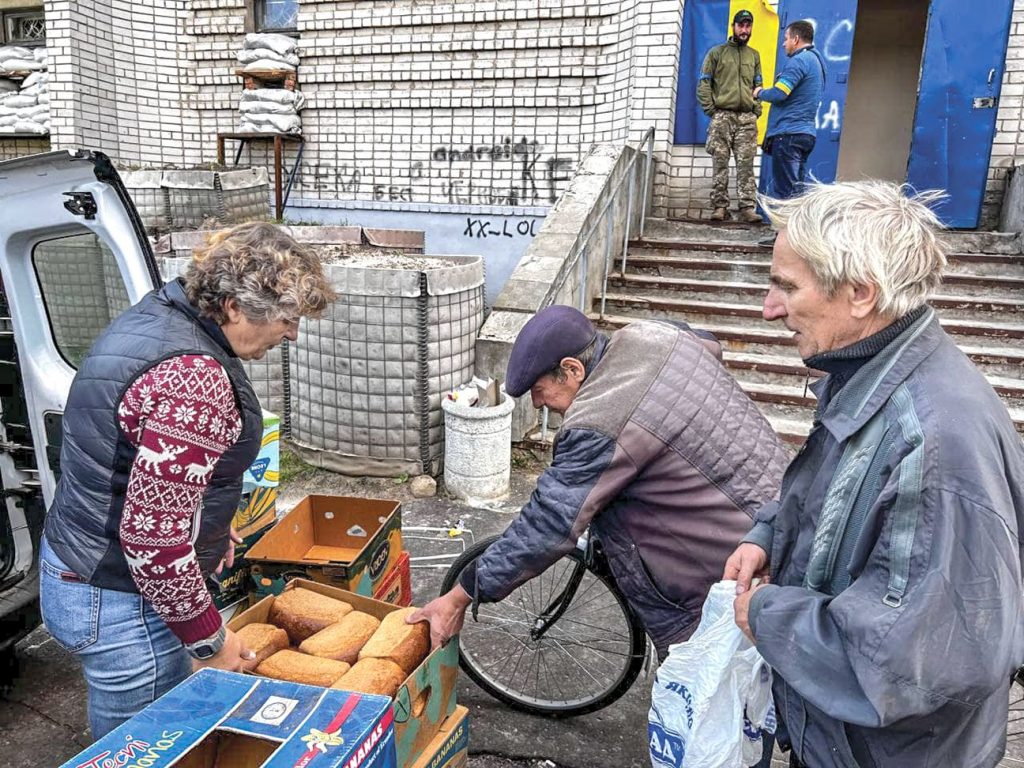 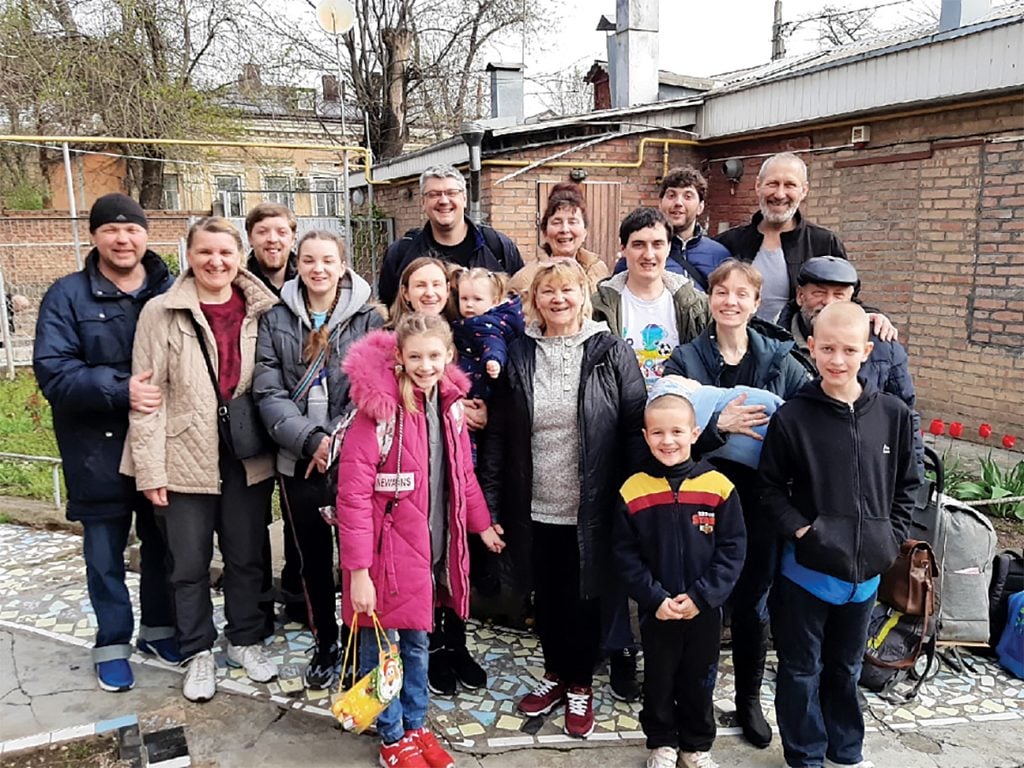