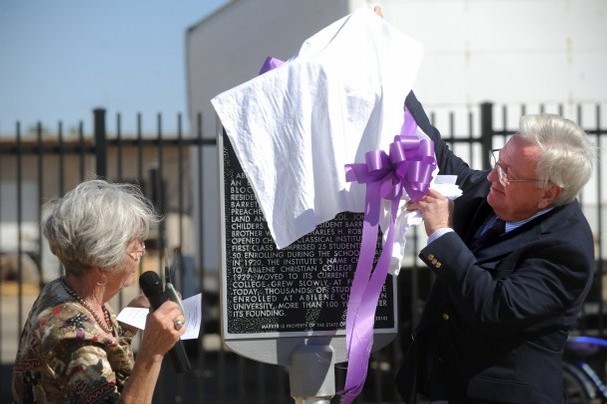 Anita Lane and Bruce Campbell unveil a historical marker where Childers Classical Institute opened in 1906. The school, which is now Abilene Christian University, moved to its current location in northeast Abilene, Texas, in 1929. (Photo by Nellie Doneva, Abilene Reporter-News, via www.reporternews.com)

An official Texas historical marker was unveiled Friday at 2074 N. First St., the original campus of the school that eventually became ACU. It opened with 25 students on Sept. 11, 1906, as Childers Classical Institute, an elementary and secondary school.
“We’re proud to be able to do this,” Anita Lane, Taylor County Historical Commission chairwoman, said as she and Bruce Campbell of Abilene unveiled the marker. “It is worthy of a marker. It’s something for people to recognize.
“With this permanent marker, they can find out why we are here and the importance of this site.”