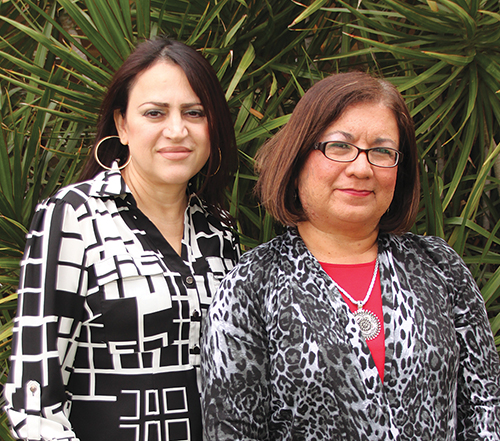 SISTERS IN FAITH, one born in Mexico and one in the U.S., discuss the Gospel and their diverse demographic

Lynn McMillon
President Emeritus
McAllen, Texas — How can Churches of Christ minister effectively to the rapidly growing — and increasingly diverse — Hispanic population in the U.S.?
The Christian Chronicle posed that question to hermanas, or sisters, in faith Rosie Fuentes and Elva Cerda. Both attend the Harvey Drive Church of Christ in McAllen, a predominantly Hispanic city in Texas’ Rio Grande Valley, about five miles north of the Mexican border.
Fuentes was born in the town of Diaz Ordaz, Mexico, and immigrated to the U.S. with her parents when she was 3. She grew up in a small, conservative Iglesia de Cristo (Church of Christ) where all services were conducted in Spanish.
In 1999, Fuentes became a naturalized citizen and now works as a registered nurse and coordinator at a rehab center. She has taught Bible classes for children, and she and her husband, Albert, have two daughters, ages 11 and 9.
Cerda, a third-generation Hispanic American, was born in the U.S. Her father worked for the City of McAllen for 43 years, eventually reaching the position of assistant superintendent for his department.
A successful real estate banker for 34 years, she serves on the board of Affordable Homes of South Texas and was named Woman of the Year in 2004 by her city’s chamber of commerce. She and her husband of 28 years, Pablo, have an adult daughter.
In your opinion, can English speakers effectively minister to Spanish speakers in the U.S.?

Fuentes: Yes, I believe they can.
However, if I spoke only Spanish, I likely would prefer to be ministered to in Spanish by Spanish speakers.
I can speak on my parents’ behalf. They would prefer the same. My father, who speaks mostly Spanish, visits English-speaking churches on occasion but feels a need to be with his Spanish-speaking hermanos and hermanas (brothers and sisters).
This may not be the case for everyone, though.

What do you recommend for reaching young Hispanics growing up in the U.S.?

Cerda: The current generation of young Latinos is high-tech and highly mobile. Consistent outreach for this demographic should include email, text, website interactive services, Facebook and other social media.
Adding visual elements to our services, such as videos, may be more impactful to youth than the standard worship services I grew up attending.
But we must be cautious. Some community churches use music and video and make their services more of an entertainment venue to contribute to their growth. For me, striking a balance to keep our worship traditional but progressive is a challenge we must be able to meet.

Should churches intentionally incorporate elements from Latino culture — or focus on service projects in Latino communities?

Fuentes: In the past I’ve heard about churches planted with the intention of including cultural things —  the quinceañera (celebrating a girl’s 15th birthday, a tradition in Latin America). Or churches go out into the community and try to help people: “Do you need us to paint your garage or build a fence? What can we do to help you?”
I don’t think that service-type projects and approaches  — with the goal of introducing Latinos to our churches — are the most effective. I believe these efforts may be helpful, but the message of salvation is all that is truly needed to reach any people.

To what extent should churches provide language instruction, teaching English to first-generation Hispanics in the U.S.?

What differences do you see between first- and second-generation Hispanics in the U.S.?

Fuentes: Even though I have lived in this country for 43 years, I spent 25 years going back and forth to visit family in Mexico. I identify myself as a Mexican who is also an American.
This is not the experience of my daughters. They are very American. They do not know very much Spanish and do not have a lot of interest in learning it, which grieves me.
I still love the Spanish language and culture. It is a beautiful language. I study the Bible in both languages. I still pray in Spanish.

Cerda: I believe many spiritual issues faced by first-generation Latinos in the U.S. also are faced by second- and third-generation Latinos.
I think that first-generation Hispanics have some social and theological issues to sort out when dealing cross-culturally with the Anglo community that taught them the Gospel.
One example that I recall is, during my childhood, we didn’t celebrate Christmas as we now do, largely due to the teachings of the church.
The many changes in today’s church have been somewhat difficult for some of our older members to overcome. But, in many cases, these changes are welcomed by those in my generation.

Filed under: Dialogue Features One Nación Under God Series