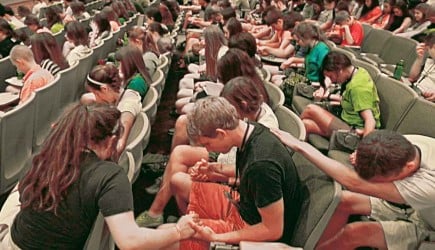 After all, the camp motto is tattooed on her left arm.

Morgan, 18, a member of the West Seventh Church of Christ in Columbia, Tenn., decided to make that message permanent after attending last year’s inaugural GO! Camp.

“It’s been different from any other camp I’ve ever been to,” the recent high school graduate said. “I’ve grown up in the church, and I’ve been a part of a ton of camps, but I’ve never been to one that not only talks about what you can do but also shows you how.”

The teens donatedmore than 3,000 bottles of water to an Arkansas-based homeless outreach unitcalled The Van.

One night, all thestudents and counselors drove to nearby Jackson, Tenn., and cheered at abaseball game played by children with special needs.

For many youthgroups, Bible camp means swimming in creeks, bunking in rustic cabins andsinging praises to God around campfires.

Other teens sleep inChristian university dormitories and eat in campus dining halls as they flockto leadership and service camps with names such as Cornerstone, Encounter,Genesis, Horizons, Impact, Kadesh, Soul Quest and Zenith.

GO! Camp teachesyoung people how to recognize needs in their own community and take action,director Brad Montague said.

“Everything isabout, ‘How can I take this home? What does this look like there?’” saidMontague, a former youth minister. “That’s the big push.”

Months ago, GO! Camporganizers set a goal of raising $30,000 to feed starving children.

The idea was thatthe funds would be used to buy bulk quantities of rice, vegetables, soy andchicken.

Campers wouldmeasure the bulk supplies into smaller meal packets, then box the packets andship them to destinations such as Haiti and Africa.

Jenna Ellison andKelli Clausel, youth group members at the Savannah Church of Christ inTennessee, decided to host a benefit banquet at their church.

“Our idea justsparked and blew up,” said Clausel, 16. “It just gave everyone … a chance togive something.”

“Our church cametogether, and our community came together,” said Ellison, 17. “I don’t knowwhat happened. God happened.”

In all, GO! Campsupporters collected nearly $52,000 for the food project. At Freed-Hardeman,campers packed 139,968 meals — enough to feed 384 children for a year.

“You see the kidscome to life when they realize they can live beyond themselves and get involvedin something bigger than they are,” said Beth Haley, a Freed-Hardeman graduate.“They find their purpose.”

Haley found herpurpose as the founder of Exile International, which provides art andexpressive therapy to former child soldiers and war-affected children. A memberof the Otter Creek Church of Christ in Brentwood, Tenn., Haley shared herexperiences with the campers.

After GO! Camp lastyear, Katie and Claire Morris decided to gather eyeglasses to send to poorcountries.

The twin sisters,now 13, dubbed their project “Blind But Now I See.”

“I was thinking, ‘Iwear glasses and contacts. What would it be like without them?’” Katie said.“That inspired me to start it.”

The girls designed alogo and placed collection boxes at their school.

Hundreds ofdonations later, Katie and Claire remain committed to the cause, said theirfather, Chuck Morris, a Bible teacher at Jackson Christian School and youthminister for the Crosswinds Church of Christ in Three Way, Tenn.

“So many times ourcamps are very introspective as to my relationship with God, my spiritualgrowth. This is almost the next step,” Morris said.

“I think these kidsreally get the message of Christ — I want you to be salt and light — andthey’re not satisfied with letting the lights hang in a church building and lettingthe salt sit in a shaker,” he added. “They want to be out making a difference.”

Ellison, who made adifference by organizing the benefit banquet in Savannah, agreed.

“Other camps I havebeen to, it’s all about changing your life, like ‘get right with God,’” shesaid. “That’s a great thing, but this camp is more about ‘you get God, and thenyou go and take him to everybody else.’”

Morgan got hertattoo on April 7, her birthday.

“I planned it for awhile because I knew it was something that I wanted a constant reminder of,”she said. “It’s very simple, but it means a lot.”