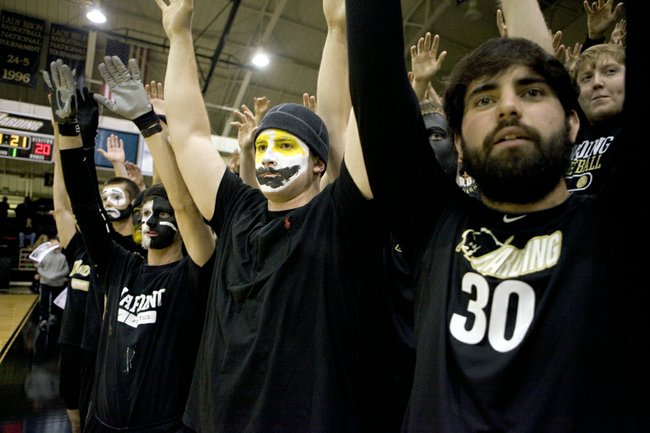 Luke Smith, Landon Hodnett and Will Lynn cheer for the Harding University men’s basketball team during its game against Northeastern State University (Oklahoma) in December 2012. (Photo by Curt Youngblood, via www.arkansasonline.com)

Harding University is nominated for “Best Road Trip Destination in College Basketball presented by Enterprise Rent-A-Car”, Intersport announced.
Voting for the 10 finalists opened Jan. 9 with the winner to be completely fan-determined through Facebook voting at: Facebook.com/BestofCollegeBasketball. Fans can vote once per day until January 25.
The winning school will be featured in GEICO Best of College Basketball on Saturday, April 6 on CBS.
The 10 finalists were chosen based on a wide range of categories including in-game atmosphere, history of the program, pre- and post-game events, scenery and attractions of the town and many more. Fans can visit the Facebook page to view videos and photo albums showcasing why each school is a perfect college basketball road trip destination. 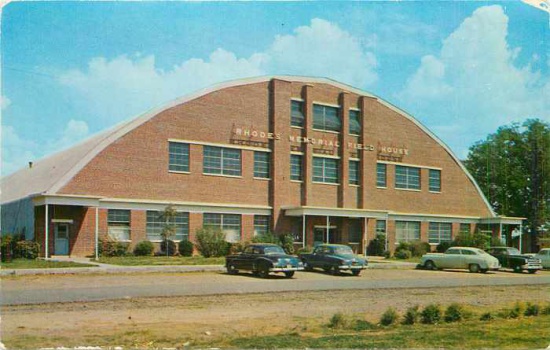 Harding’s Rhodes Field House is one of the most unique arenas in college sports. A converted World War II airplane hangar purchased by Harding in the 1940s, the Rhodes Field House was renovated in 1997.
It is now one of the premier arenas in Division II and hosts the now-famous Rhodes Rowdies, which has grown from a small section of students to include everyone in attendance. Harding has a 157-51 record in men’s action in 15 seasons since moving back into the Rhodes.
It has been recognized as a must-see by several Arkansas travel books, and is lauded by opponents as their favorite road arena to visit.

To vote for Harding, go to this link and click “vote now” under “Rhodes Field House: Harding University” (second row, on the left). Or navigate to the page by clicking on the Facebook link in the selection above.
Here’s a snippet from a recent story from the Arkansas Democrat-Gazette that mentions the Rhodes Rowdies:

It’s been a good few weeks for the Rhodes Rowdies.
The men’s basketball team at Harding University in Searcy started its season with six home games in a row and won them all.
It’s the best record the team has had since 2002-03 and enough reason for the dedicated, face-painted hoard in the student section to yell even harder.
“Harding has always had tremendous support from our students at home basketball games, especially since we renovated the Rhodes Field House in 1997,” said Scott Goode, Harding’s sports information director. “Harding consistently leads the conference in attendance and outdraws many Division I schools.”
Being in the Rhodes Rowdies doesn’t require a membership fee or special shirt. As senior Landon Hodnett said, “It’s not official, official.”
The management of information systems major has been involved with the Rowdies since his freshman year at Harding, when a fellow member in his men’s club, TNT, invited him out.
“Everybody was going, so it was a given,” said Hodnett, 22.
The Rowdies sit in the student section on the side opposite the scorer’s table, from the court to the top of the first tier of seats.
“Starting at the baseline are the craziest people, and as you move up, it’s more casual,” Hodnett said.