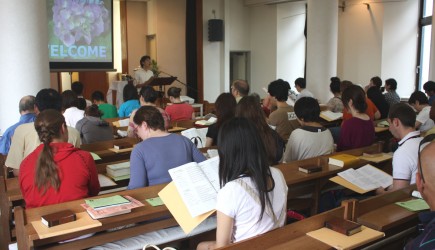 Erik Tryggestad
MITO, Japan — East meets West on Sunday mornings at the Mito Church of Christ. A Japanese Christian is as likely to say a prayer in English as a U.S. — or Canadian — believer is to give a communion devotional in Japanese. The church sings in both languages.
The 100-member congregation has close ties to the West — particularly Oklahoma. So does Ibaraki Christian University, a school with roots in Churches of Christ located about 30 minutes from Mito in Hitachi City.
Christians in both cities felt the earth shake on March 11, 2011, and have played roles in relief efforts in the months since the devastating earthquake and tsunami.
Following are a few of their stories:
• “We’ve always hated these poles,” Atsushi Tsuneki said, pointing to the massive round supports that obstruct the view in the Mito church’s auditorium. But the columns likely kept the building from sustaining severe damage during the earthquake.
Tsuneki, minister for the Mito church for about two years, has faced the task of balancing physical and emotional support for the people of Mito with the needs of those in the hard-hit coastal areas. The church has spearheaded relief efforts and sends teams to communities devastated by the tsunami, including Ishinomaki.
“I sometimes wish this didn’t happen,” he said. “It’s been very challenging. At the same time, we are learning unity.”
• The quake delayed Rieko Asperheim’s wedding. She and her fiance, Dan, were scheduled to be married on March 27, but the chaos after the quake postponed the ceremony until May 1.
Rieko Asperheim is a school nurse at Ibaraki Christian. She provided blankets and looked after children who sought shelter at the school during the frigid night after the quake.
Like many Japanese, she struggles with guilt and said her faith has been challenged by the events of that terrible day. During the quake, she prayed for her family’s safety, but “the people who lost loved ones — they prayed too,” she said. “Why did they die?”
“I feel a lot of times in my life like God is saying ‘Come back to me,’” she said. “Now, I feel it again.”
• “As an Ethiopian, I grew up being helped,” Allen Thompson said. “Now, I’m on the other side.”
Thompson moved from East Africa to live with his adopted family in Wisconsin at age 14. He graduated from Oklahoma Christian University, where he met his wife, Laura. The couple teaches English in the Mito school system.
Seeing piles of debris in Ishinomaki was overwhelming, Thompson said, “so I tried not to think about the whole pile. I learned how to be patient. I was reminded that we are all weak, but (God) will use whoever is willing to go through the storm.”
• Miranda Logwood and her husband, Derrick, also teach English in Mito and attend the Mito church.
“Over the years, this group of people has become my Japanese family,” she said. “I have at least three or four mothers who would do anything for me.”
Logwood helped remove debris in Ishinomaki. “At the beginning of the day, it was hard to feel like we were making a difference,” she said. “But the people really did appreciate us.”
Unlike relief work in developing nations, “three months ago, they were living just like me,” she added.
• Hitomi Yabe, a dual citizen of Japan and the U.S., grew up in a typical, nonreligious Japanese home.
Her life changed when she enrolled at Ibaraki Christian. She participated in the school’s exchange program with Oklahoma Christian and served on a mission trip to the Navajo Reservation in Tuba City, Ariz., where she saw Christians at work. On April 5, 2009, she was baptized. Now she teaches English on the Japanese island of Okinawa.
In the months since the quake, “I have witnessed what Christians have done,” she said during a visit to the Mito church. “This devotion makes my faith grow.” Despite the trials ahead “I will be smiling back at God, saying, ‘Thank you for giving me suffering, perseverance and hope.’”