The Eisenhower Tiger’s white-and-baby-blue jersey — with No. 10 on the back — covers a footlong scar down his chest.

That scar helps explain what makes this start so remarkable: Less than six months earlier, Darrell and DeVona Oakley’s youngest child — their only son — received a new heart.

“It’s an absolute gift from God to still be able to play this game,” said Josh Oakley, 18, a member of the Northside Church of Christ in Wichita, about 15 miles east of this suburban community of 4,600.

“I’d already accepted that God was going to take him, and I was preparing myself to have to feel what he felt by giving up his son,” Darrell Oakley said.

Since he was a young boy, Josh Oakley always has loved baseball — and God.

From an early age, he learned from his parents and sisters the importance of faith and dependence on Jesus.

As the teen battled for his life, he and his loved ones clung to that faith.

“We had thousands of people praying for him,” DeVona Oakley said while watching her son pitch again, the smell of concession-stand popcorn wafting through the air. “We truly believe that’s the only reason he’s still here, let alone playing baseball.”

‘Something was really wrong’

For Josh Oakley, the first signs of trouble came during baseball season last year. He’d be pitching and suddenly run out of gas.

“The coach asked us if he had low blood sugar because they noticed that he’d just kind of fade out and be tired,” his mother said.

The family started sending extra snacks, but a doctor tested his blood sugar and found a normal level.

Someone else wondered if the teen’s coughing and fatigue might be signs of asthma.

However, another trip to the doctor ruled out that possibility. 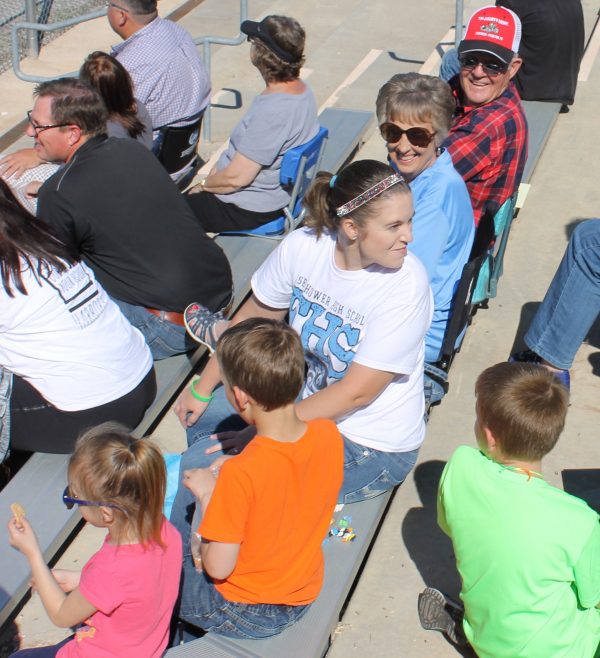 Grandparents Duane and Donna Earles, sister Michelle Leibham and other family and friends watch Josh Oakley’s return to the mound.

In mid-July, Duane and Donna Earles — Josh Oakley’s maternal grandparents and longtime members of the Poplar Avenue Church of Christ in Wichita — celebrated their 60th anniversary. They took 36 relatives, including their grandson, with them to Cancun, Mexico.

Soon after returning from Mexico, Josh Oakley joined the Northside church’s youth group on its annual “teen camp” trip to Colorado. But he couldn’t stay awake.

“They kept texting me and saying, ‘He’s just asleep in the cabin,’” DeVona Oakley recalled.

He was supposed to pitch the morning after the youth group’s return, but he coughed all night and kept his mother awake.

“You’re not going,” she replied.

“That’s when I knew something was really wrong,” his mother said, “because he never passed up going to pitch.” 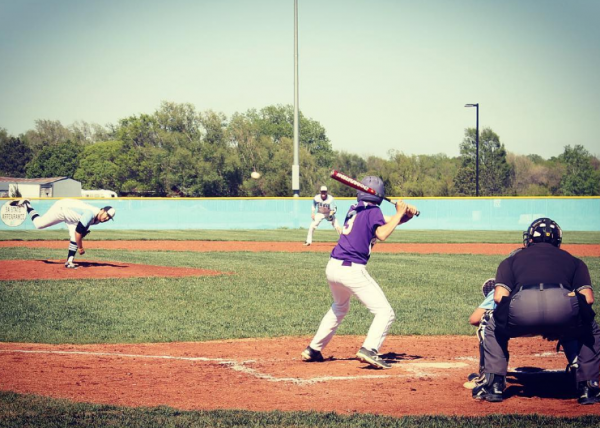 Josh Oakley delivers a pitch during his first start since receiving a new heart.

The next day, DeVona Oakley — a middle school registrar — had to work.

But Darrell Oakley, who owns a lawn care business, took his son to the doctor. Again.

“Don’t leave until they find out what’s wrong with him,” DeVona Oakley told her husband.

“Mom, my heart’s twice the size it should be,” Josh Oakley said when he called his mom with the diagnosis. 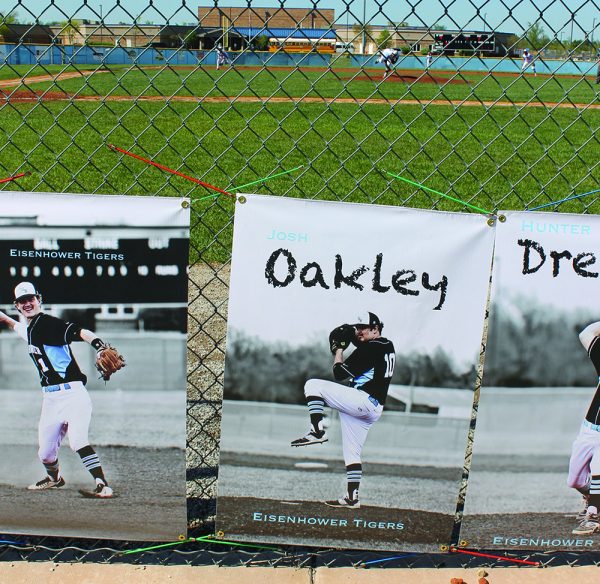 A picture of Josh Oakley hangs on the fence at the Eisenhower High baseball field in Goddard, Kan.

The family scheduled an appointment with a cardiologist for three days later. But when his condition quickly worsened before then, they took him to Wichita’s Wesley Medical Center.

The teen’s heart was pumping at about 10 percent of a normal level and dangerously close to shutting down.

“Of course, Dr. Cassidy didn’t tell us any of that, but you could tell on his face that something was wrong,” DeVona Oakley said. “We heard him on the phone, and he kind of lit a fire under the cardiologist who had gone home for the day.

“He is the first doctor,” she said of Cassidy, “that God used to save Josh’s life.” 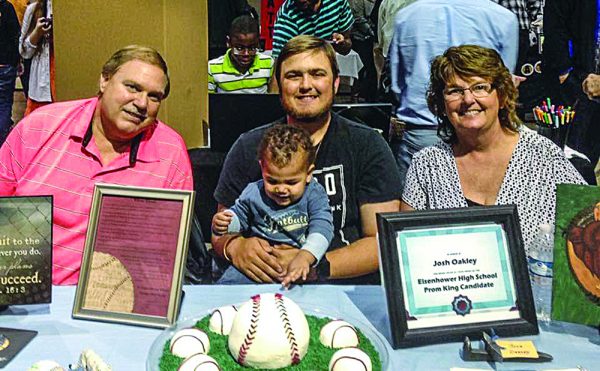 Josh Oakley with his parents at the Northside Church of Christ in Wichita, Kan., on Senior Sunday.

‘What a close, amazing family’

The Wichita specialists determined that Josh Oakley, then 17, needed to be airlifted immediately to Children’s Mercy.

His mother flew with him, and they arrived at the Kansas City hospital — 200 miles northeast of Wichita — about 2:30 a.m. on a Wednesday in early August.

“His heart was big and dilated like a balloon and not squeezing well,” said Dr. Aliessa Barnes, Children’s Mercy’s medical director for pediatric cardiac transplantation. “So we started him on continuous medication through his veins to help his heart squeeze.” 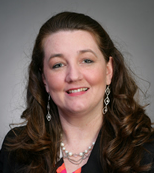 The rest of the family — including Josh Oakley’s five sisters, all married and at least eight years older than he is — rushed to be by his side.

“The first thing that struck me was what a close, amazing family they are,” Barnes said. “With his five sisters, I think he has six moms.”

At the time, four of those sisters — Jennifer Douglas, 33; Krista Prindle, 31; Kayla Skiles, 29; and Michelle Leibham, 26 — lived in the Wichita area and attended the Northside church. (Skiles later moved to the Phoenix area, where she is a member of the West Olive Church of Christ in Peoria, Ariz.)

Josh Oakley’s oldest sister — Jessica Coleman, 34, a member of the Woodland Oaks Church of Christ in The Woodlands, Texas — did not let distance keep her away.

“My husband and I woke our kids and got in the car and drove through the night from Houston,” Coleman said. “We all had to be together — for Josh, for my parents and for each other.

“I cannot imagine a family going through what Josh and our entire family have … without having each other and our strong faith in a mighty God!” she wrote in a message to The Christian Chronicle. 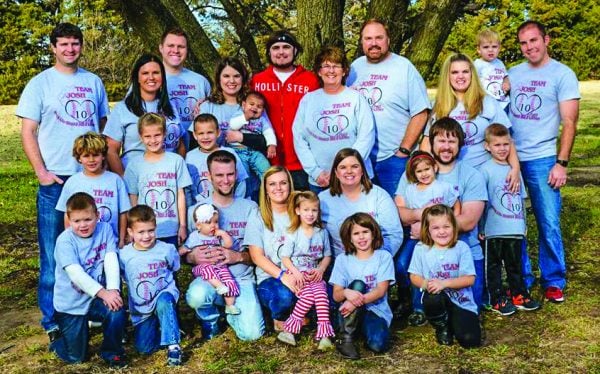 ‘We almost lost him’

Doctors put a breathing tube down Josh Oakley’s throat to reduce the stress on his heart.

Later, when they couldn’t stabilize him, they turned to a heart and lung bypass machine known as ECMO, which stands for “extra corporeal membrane oxygenation.”

For long-term survival, though, he needed a new heart.

Hundreds of believers joined the “Prayers for Josh Oakley” Facebook page and begged God to save his life.

In late October, doctors contemplated replacing Josh Oakley’s ECMO with a mechanical heart — or in medical terms, a ventricular assist device (VAD). That short-term solution could extend his life but would delay a possible transplant by two months, the family was told.

As that decision loomed, the young man’s condition kept deteriorating. While awaiting a heart donor, he lay sedated for weeks.

“We almost lost him on a Sunday night,” his mother said. But that Monday came the answer to the family’s prayers: a healthy human heart matching Josh Oakley’s body size and blood type.

Darrell and DeVona Oakley felt at peace as the transplant team — led by surgeon Dr. Jim St. Louis — rolled him into the operating room that Tuesday.

They trusted in God.

“God is faithful,” said Darrell Oakley, his voice cracking. “Even if that meant taking my son, that’s what I believe. But he did not take my son.”

She sees ‘miracles every day’

Dr. Barnes is in the “miracle” business. Every heart transplant, as she sees it, falls into that category.

First, a donor or donor’s family — often in the midst of huge personal tragedy — decides to give a stranger a vital organ, Barnes said. “I have no words,” she said, “to thank the people who help us have these amazing kids like Josh on earth continuing to do good things.”

After identifying a donor, surgeons blessed with God-given talents transplant that organ — in this case, a heart — into another human being, she said.

“I am in awe at the fact that I truly see miracles every day,” said Barnes, who is a Christian. “I truly believe that God works through us as the physicians to help people.”

Throughout his ordeal, Josh Oakley asked the same question: “Can I play baseball again?”

Yes, Barnes told him, a heart transplant will allow you to play the game you love again.

After taking time to recover, she explained, you’ll feel like new again. You’ll just need to take your medicine and guard against complications — such as infections or the body rejecting the heart or even cancer.

“A transplant is wonderful and amazing,” the doctor said. “The whole point is, I don’t want to do a transplant and keep him in a bubble.”

No, she wanted him back on the pitching mound. 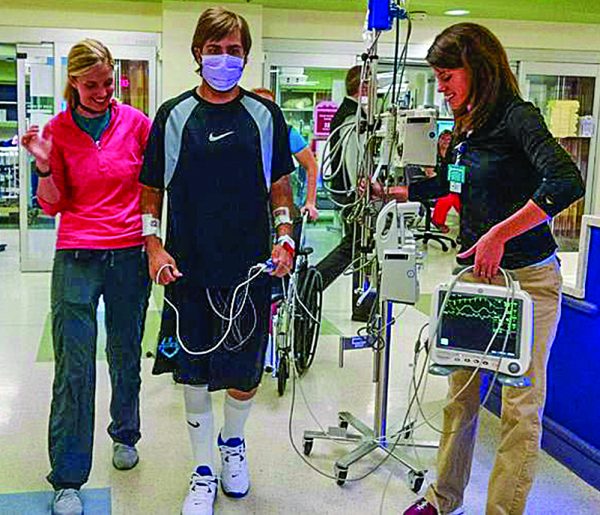 Josh Oakley walks with his physical therapist two weeks after his surgery.

Velocity down, spirits up

Before the surgery, Josh Oakley recalls throwing fastballs in the upper 80s.

He’s still rebuilding his muscles, and his diminished velocity shows it. Nonetheless, he throws 72 pitches in four-plus strong innings in his first start since the surgery.

His coach, Cary Dinkel, pats him on the back as he exits with a 7-2 lead.

“He’s picked right up where he left off,” Dinkel said of the pitcher, who plans to attend Tabor College in Hillsboro, Kan., on a baseball scholarship. “I’m mind blown by what he’s been able to do. It is a miracle.”

Josh Oakley’s family raves about the doctors and nurses at Children’s Mercy. They voice extreme gratitude for the Ronald McDonald House, which during his recovery provided comfort, lodging and meals. They never fail to mention all those who lifted up their son and brother in prayer or offered personal encouragement, including then-Royals pitcher Jeremy Guthrie. 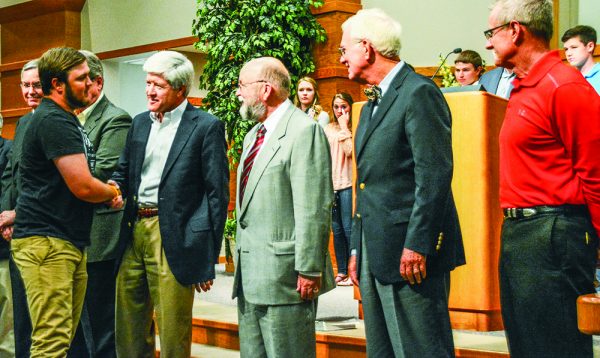 Josh Oakley shakes hands with elder Brent Groves as leaders of the Northside Church of Christ in Wichita, Kan., congratulate him during the church’s Senior Sunday presentation.

But they have no doubt where credit for his amazing journey truly belongs.

The final score ends up 10-4. Josh Oakley earns the win.

But give God credit for the save.