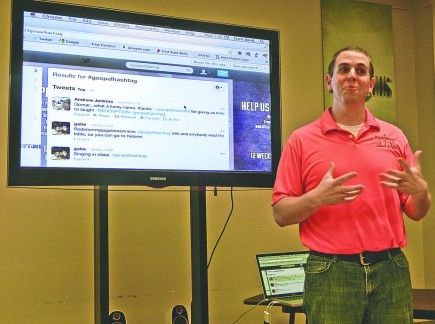 Bobby Ross Jr.
SPRING HILL, Tenn. — #REDEMPTION.
That was the featured hashtag in the youth group Bible class at the Spring Meadows Church of Christ on a recent Wednesday night.
As youth minister Scott Bond pushed the play button on a video, he urged teens to take out their smartphones and discuss the lesson among themselves — and thousands of other young people.
“Right now, there are 177 churches doing this same series together,” Bond told the class. “There was a church that registered today in Pearl Harbor. … If I was in Hawaii, I’d probably be surfing, but they’re doing the Hashtag Youth Series.”
Think of the Hashtag Youth Series as a high-tech version of long-popular areawide summer youth series.
But instead of driving to a sister congregation, youth groups watch a recorded lesson and post responses and questions online via Twitter.
“A lot of young people, in a lot of studies that are being done today, don’t know how to articulate or put into words what they believe,” Bond said.
Tweeting — as posting on the online social networking site is known — gives them a creative outlet to do so, he said.
“And they have to do it in under 140 characters,” he added. “Short and simple. It’s really amazing.”
SMALL START, SURPRISING SUCCESS

The Spring Meadows church launched the Hashtag Youth Series as a 12-week, high-definition video series featuring different speakers from Churches of Christ.
For those unfamiliar with Twitter, a hashtag is a special symbol used to mark keywords or topics in a tweet. Everyone using the same hashtag — or searching for it — can follow the conversation.
Tackling topics such as #RESCUE, #RELATIONSHIP and #RECONCILIATION, the speakers recorded lessons in a makeshift studio at the church south of Nashville.
Series coordinator Bond said he initially expected a dozen churches — the speakers’ home congregations — to participate.
“It started out really small, but it has grown to so much more than we could have imagined,” said Bond, pointing to registrations by churches in 27 states and 10 countries. “Churches of Christ are actually starting to be evened out by the number of Baptists and Methodists and Presbyterians.”
On this night, the featured speaker was Joseph Horton, youth and family minister for the Winchester Church of Christ in Tennessee.
During Horton’s lesson, Spring Meadows member Lacey Paige Barr, 16, tweeted: “We’re all slaves to sin. Jesus can set us free! #redemption #gospelhashtag”
After class, Barr described the series as “really uplifting.”
“It’s really cool to know that other people across the world … are watching the same thing and believe the same thing that you do,” she said.
PLANTING HIGH-TECH SEEDS

More than 150 miles away, Lacey Wood, 17, a member of the Midway Church of Christ in Jasper, Ala., boiled down the lesson this way: “Prison+Price+Person=Redemption #redemption #gospelhashtag”

Wood describes her passions as painting, singing and “getting as many souls to heaven as possible.” She said 30 to 40 teens in her county meet each week at a different church building and watch the series.
“For me, I have had many signs of catching people’s attention,” Wood said of her tweets. “I’ve had retweets, and even others have responded by writing notes like ‘You have amazing tweets’ and ‘I’ll definitely go check Hashtag out.’”
A website — hashtagyouthseries.com — provides study materials, links to “tweets of the week” and speaker biographies.
The lessons also are available — for free — on Internet channels such as YouTube and Vimeo.
A church could begin the series at any time or start in the middle — to allow live interaction — and then go back and catch the lessons missed, Spring Meadows minister Dale Jenkins said.
“We kill our youth ministers in the summer,” Jenkins said. “Scott has been gone on a youth mission and a work camp and a camp itself. And then we do Vacation Bible School.”
With everything else going on, Hashtag means the youth minister does not have to prepare another lesson, he said.
Andrew Thompson, youth and family minister for the Priceville Church of Christ in Alabama, learned of the series through Facebook.
“I saw this as a great opportunity to evangelize not only to the youth group but to their friends in a way that would be appealing to them,” Thompson said. “We live in a society today that is all about social media and technology, and Hashtag incorporates them both.”
About 20 Priceville teens are getting together each week to watch the series, which Thompson said is a “truly amazing” number for the 100-member congregation.
“This has opened up the kids’ comfort zone, and they are inviting people,” he said. “We are planting the seed and asking God to give the increase.”
At the Spring Meadows church, members gathered before class to witness the baptism of Monica Cope, a high school sophomore.
Cope, who began visiting on Wednesday nights a few months ago, decided to confess her sins and be immersed after watching the first two Hashtag lessons.
That afternoon, she tweeted: “Getting baptized tonight. 🙂 #gospelhashtag today too. So excited to be saved!”