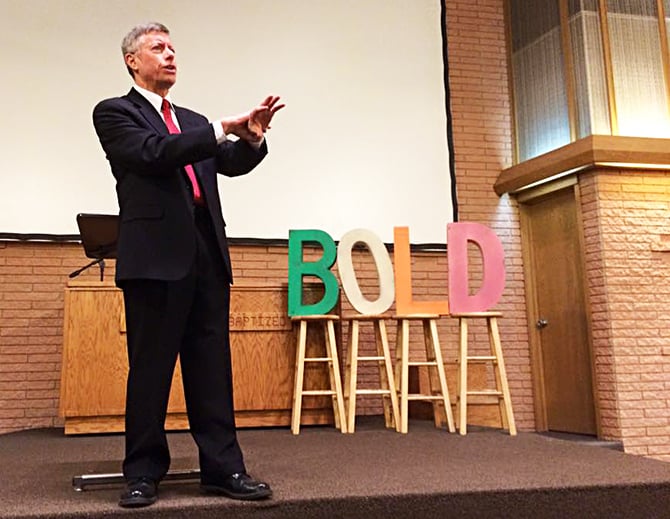 Longtime minister and educator will serve as chancellor of the Vienna, W.Va., university associated with Churches of Christ.

Erik Tryggestad
President and CEO
Harold Shank will step down from the presidency of Ohio Valley University in Vienna, W.Va., at the conclusion of the 2017-18 academic year, the university reports.

Shank, a longtime minister and educator and a former reviews editor for The Christian Chronicle, assumed the presidency of the 550-student university in 2011. OVU is associated with Churches of Christ

Following is a statement released today by the university:

Dr. Harold Shank, president of Ohio Valley University since 2011, announced at the school’s meeting of its Board of Trustees June 3 that he would be stepping down from that position in 2018. However, he will not be leaving the university.

The OVU board will name Dr. Shank Chancellor of the university following the tradition established when Dr. E. Keith Stotts assumed his chancellorship following his presidency. Dr. Stotts will continue his tenure at OVU as Chancellor Emeritus.

In his new position Dr. Shank will pursue university interests in church development, biblical scholarship, and lead a variety of special projects for the university. He came to OVU following his work as a Church of Christ minister, church planter, author, and university professor.

“The past few years show important progress in Christian higher education at Ohio Valley University, and I want to advance the school any way I can. I’m continually impressed by the commitment of our constituencies and the success of our students,” Shank said.

Following the announcement, the OVU board expressed its appreciation for Shank’s leadership, noting that during his tenure the university achieved full ten-year accreditation from the Higher Learning Commission, has expanded its academic offerings, has explored alternative means of financing for Christian higher education through the development of the Alternative Clean Energy and Katharos projects, and has deepened the university’s commitment to the Churches of Christ.

Dr. Gail Hopkins, speaking on behalf of the board as its chair, complimented Shank.

“President Shank took over during very turbulent times and skillfully calmed the waters.  He has positioned the university in such a manner that its best days are about to be achieved. The university will express its appreciation to President Shank in more concrete ways as we proceed through his final year of service as President of Ohio Valley University,” Hopkins said.

As of June 3 the OVU board has initiated a public phase of soliciting prospective candidates to succeed Shank as OVU’s tenth president. Potential candidates or interested parties are encouraged to contact Cecelia Goff, Vice Chair of the Board of Trustees and Chair of the Presidential Search Committee, at 304-865-6132 or at [email protected]du.

RELATED STORIES• ‘Join in with us to save Southwestern,’ prays new president of historically black Christian college

• A conversation with Harold Shank