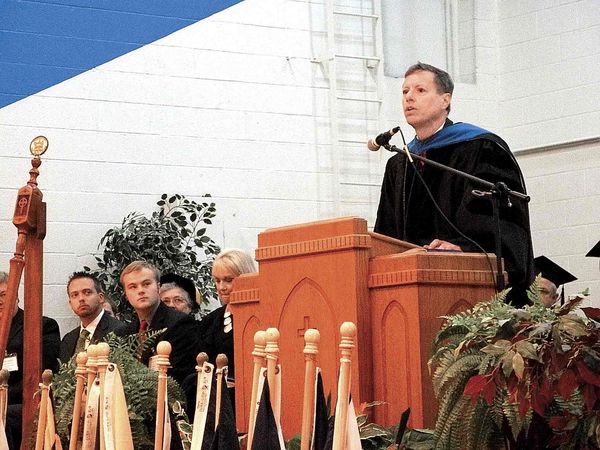 Harold Shank gives his first address as the ninth president of Ohio Valley University Friday. (Photo by Michael Erb, via the News and Sentinel, newsandsentinel.com)

The News and Sentinel in Parkersburg, W.Va., reports:

VIENNA – Ohio Valley University on Friday officially welcomed Harold Shank at its ninth president.
“I was scared to death he was going to say no,” joked outgoing President Keith Stotts, who passed the presidency to Shank during an investiture ceremony Friday at the college.
More than a dozen state and local representatives, politicians and educators spoke during the ceremony, welcoming Shank and his family to the college and to the Mid-Ohio Valley.
Shank most recently was the professor of Old Testament at Oklahoma Christian University in Oklahoma City. He is a noted author and minister with 32 years of service to the Highland Street Church of Christ in Memphis, Tenn. Since 1996 Shank has been the national spokesperson for the Christian Child and Family Services Association, and he is the reviews editor for the Christian Chronicle, a monthly newspaper serving Churches of Christ.
Shank said Friday’s ceremony for him was a time of introspection.
“Today I am pressed to go deeper,” he said.

Read the full story. A clarification: Shank is the former reviews editor for the Chronicle. He stepped down from that position when he moved to West Virginia.