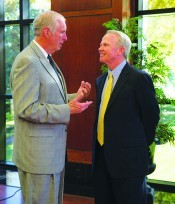 Bobby Ross Jr.
Like his predecessors, Bruce McLarty said his goal as the fifth president in the  89-year history of Harding University in Searcy, Ark., will be to maintain its Christian mission.
Or, as McLarty described it in his doctoral dissertation, he desires “to prepare Harding University to remain Christian in our core identity until Jesus returns.”
In an interview with The Christian Chronicle, the veteran preacher said, “I am deeply committed to the goal that Harding University will continue to offer an outstanding university education that is thoroughly Christian, academically excellent and financially accessible to everyone.”
McLarty, who has served as Harding’s vice president for spiritual life since 2005, will assume the top administrative post this summer.
Trustees of the 6,800-student university, which is associated with Churches of Christ, recently chose McLarty to succeed David Burks, who is retiring after 26 years at the helm. During Burks’ tenure, Harding achieved 25 straight annual record enrollments.
“Dr. McLarty is a leader, not in the mold of a typical CEO or academician, but he is a servant leader with a very bright mind, a keen insight into people and the ability to communicate effectively,” said John O. Simmons, chairman of Harding’s board of trustees. “He brings energy and a clear vision of the mission of Harding to the table, and he will be an effective leader as our fifth president.”
Burks expressed “great confidence” in McLarty: “I believe he will be an outstanding president for Harding University. Dr. McLarty has a very solid grasp of the spiritual mission of Harding and has written about it, helping the faculty in understanding this powerful mission.”
McLarty, 55, received a bachelor’s degree in Bible from Harding in 1978, then completed a master of theology degree at Harding School of Theology in Memphis, Tenn., in 1982.
His wife, the former Ann Hutson, is a 1980 nursing graduate of Harding and works as a nurse in the university’s health services center. The couple’s two daughters, Charity and Jessica, both attended Harding.
Before going to work for his alma mater, Bruce McLarty devoted nearly a quarter-century to full-time ministry. He spent 14 years as the preacher for the College Church of Christ in Searcy.
After leaving the pulpit, he earned a doctor of ministry degree from Ashland Theological Seminary in Ohio in 2010. He titled his dissertation “Helping New Teachers Embrace the Spiritual Mission of Harding University.”
“When Dr. Burks began to seriously consider retirement, my resolve became ‘to be ready if called,’” McLarty said. “Many friends, colleagues, alumni and other administrators encouraged me to consider entering the selection process, and those same people have continued to be very supportive of my acceptance of this position.”
In a wide-ranging interview with the Chronicle, McLarty discussed his faith, Harding’s future and Churches of Christ.
Some highlights:
• His baptism: “On the Fourth of July weekend in 1969, I walked down the aisle at the Holmes Road congregation in Memphis during the invitation song, confessed my faith in Jesus and pledged my allegiance to follow him for the rest of my life. Jim Bill McInteer had just concluded a meeting there, and our preacher, Leon Sanderson, baptized me into Christ that night.
“Equally powerful to the memory of what I thought and felt before my baptism is the memory of the warm embrace of the church following my immersion. I stood in the hallway that night with my back against the cinder-block wall and received a hug from what seemed like every single man and woman in the congregation. I wish everyone could experience the same blessing that I received from my church family that night.”
• Issues and challenges facing Harding: “The No. 1 issue and the No. 1 challenge facing Harding are the same: Will we continue to be Christian in our core identity? My conviction is that the first step away from our Christian identity is the loosening of the bonds between Harding and the church.
“Harding University was founded by people who were deeply committed to restoring New Testament Christianity and who were seeking to be undenominational Christians. We will continue with those commitments. I am also convinced that we must be willing to express our convictions clearly and ‘out loud.’”
• Churches of Christ: “Every generation faces serious concerns about the church. The relativism and pluralism of our postmodern era are making it increasingly difficult for people to accept the authority of Scripture and the absolute truth-claims of Jesus.
“However, confusing times also create fertile soil for the Gospel. The moral and religious chaos of the first-century world made Jewish morality and monotheism strongly attractive to many Gentiles, and those God-fearers became the most receptive group for gospel preaching in the early years of the church.
“It excites me today any time I see Christians waking up to the power that is found in the Gospel.”
READ THE FULL INTERVIEW