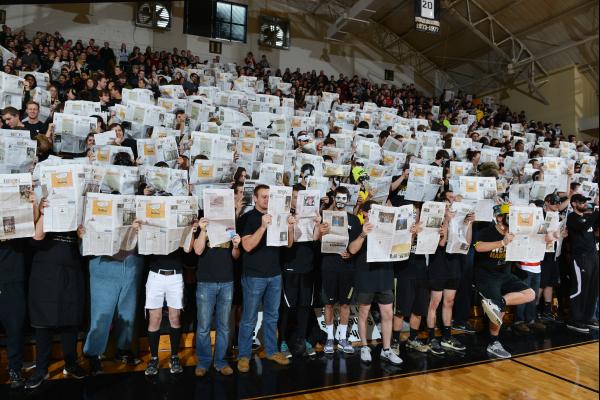 
Michigan and Louisville weren’t the only big winners on Final Four weekend.
The Harding University Bisons got praise from CBS Sports and Enterprise Rent-A-Car during the Final Four coverage for emerging victorious in the “Best Road Trip Destination in College Basketball” competition.
Harding’s Rhodes Field House — a converted World War II-era airplane hangar and home of the “Rhodes Rowdies,” arguably the loudest fans in college basketball — beat out eight other college hoops venues to win the prize. (One of them was Wichita State University — the Cinderella team that made it to the Final Four and fell to Louisville.)

It’s nice to see college students still engaged by print media. The Rhodes Rowdies read “The Bison” while players from Southeastern Oklahoma State University. A film crew gathered footage during the game for use during the Final Four feature on Harding. (Photo by Ashel Parsons)

Kelli Zink, who hosted the CBS feature, had this to say in a blog post about the experience:

Enterprise Rental had a Facebook contest where fans voted to help their school win and featured in a piece on CBS to air during the Final Four.
Believe it or not — Harding University won.
Now, as someone who went to a Big Ten school — and not just any school, one with one of the best college basketball programs out there — I was a bit confused as to how a Division 2 school won.
Turns out, the entire student body and their cousins’ cousins voted once a day. Dedication wins, people.
So we headed out to Little Rock for part one of the shoot, and then moved along to Searcy, AR.
Searcy is the first DRY COUNTY I’ve ever been to. I didn’t really know those existed to be honest, nor did I realize that to have a drink one would need to travel 30 miles from Searcy. Wild.
…
But I will say, there is something magical about the South. The hospitality of the people is something unlike anything I’ve seen in the Midwest.
…
Oh, and GOOOOO BISONS!

A few more links from this weekend’s rowdiness: A feature on the media attention in Harding’s student newspaper, The Bison, and a video of the university’s reaction to the victory.
httpv://www.youtube.com/watch?v=FuYhpGfNf3s