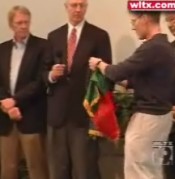 staff reports
LEXINGTON, S.C. — From the tone in his singing voice, it’s obvious Major Jeff Kerby is back in his element at Lexington, S.C., church.
But it’s his other calling with the 218th Infantry Brigade of the National Guard in Afghanistan as a physician assistant that’s made this day, Feb. 17, so special.
“I went to visit a hospital and I kind of felt around for what the needs might be and one of the needs was for good, quality children’s antibiotics,” said Kerby.
Without hesitation, he called elder Steve Izard back home to spread the word to the congregation.
Their response? $2,000 worth of medicine shipped the next week to Afghanistan.
“God has taken something that’s pretty bad, armed conflict in the world, and allowed us to join him in his work and help the people in Afghanistan,” said Izard.
Kerby says the hospital administrator turned to him and said he respects Kerby’s religion and then thanked him from the bottom of his heart.
Sunday, the congregation got the Afghani’s token of appreciation.
After months of helping the hospital out, the administrator gave Kerby an Afghan flag to bring back to his church.
“The idea that a Muslim community in a 100 percent Muslim country would say we want you to take this back to your American church, I’d say it’s historical,” said Kerby.
While he never expected to return home with a flag, Kerby syas he never doubted his church’s kindness.
“You know they’re going to just floor you,” said Kerby.
Kerby is home for two weeks before heading back to Afghanistan.
Meantime, the Lexington church prays for members of the 218th each Tuesday, and they invite anyone in the community to join them.
Editor’s note: Click here to see video of the flag presentation and related interviews, courtesy of WLTX.