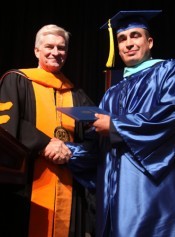 Graduating early with a mission to fulfill

Staff Reports
Staff Sgt. Ramiro Hernandez was due to deploy with the Air Force Reserve to Afghanistan just weeks before graduating from Lubbock Christian University in Texas.
The diploma would have made Hernandez  the first in his family to graduate from college.
So Lubbock Christian officials did the only appropriate thing under the circumstances: They allowed Hernandez to finish his coursework early and planned a private ceremony for him to receive his bachelor’s degree in Interdisciplinary Studies – cum laude, no less.
“He worked very, very hard to accomplish this and he deserves what has come his way,” said Ken Jones, Lubbock Christian University president. “No shortcuts were taken.”
The presentation was made during a chapel assembly with Hernandez wearing his cap and gown. The 26-year-old received a standing ovation from the audience, including Hernandez’ wife, Annikka, his 2-year-old daughter, Jazmynn, along with his parents, grandparents, in-laws, sisters, brothers, aunts, uncles and a former high school coach.
“Overwhelming,” Hernandez said of the occasion and receiving his degree.  “This was really gracious of LCU. They went a really long way to make this a very special occasion for me and my family. It’s really amazing to be the first one to graduate out of my family … it’s a big deal.”

After graduating from high school, Hernandez joined the United States Air Force and served four years.  He deployed on two tours in support of Operation Iraqi Freedom, then entered the reserves and began taking courses at two different universities. He transferred to Lubbock Christian in the fall of 2007.

“I really crammed a lot into a little bit of time,” he said.

Hernandez completed his student teaching at the high school where he graduated — not only teaching, but assisting as a coach for the state-ranked Lions football team.
He credited Annikka Hernandez with helping him finish college and asked her to participate in the graduation ceremony with him.
“I couldn’t have done it without my wife,” Hernandez said. “Without her I would have quit a long time ago.”