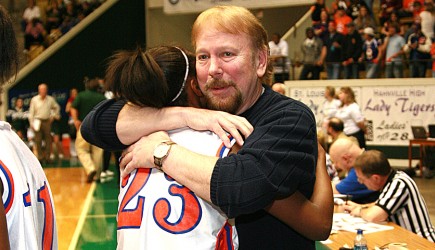 John Hawkins
SHREVEPORT, La. — It’s the second round of the Louisiana girls basketball playoffs. Late in the final quarter, coach Steve McDowell calls a timeout.
He’s not changing game plans or giving last-second instructions. The scoreboard shows his team already has clinched the win. Instead, he gathers his players and says, “I just want to tell you how proud I am of you.”
Senior Jasmine Grant recalled that moment as her favorite memory of the entire season. “I don’t think there’s any coach like coach McDowell,” she said. “We almost lost it when he told us that.”
Emotion is virtually the only thing the Southwood High School Lady Cowboys lost this season. Their 32-3 record ensured them the top seed in the playoffs. They cruised through the first four rounds, outscoring their opponents 238-111. Then the team dug deep to pull out a 43-40 win in the championship game.
But for McDowell, a member of the Southern Hills church in Shreveport, winning is no new sensation. The coach came to Southwood in the fall of 1991. The freshmen that year were seniors in 1995, the year the Lady Cowboys won their first state championship for class 5A, which includes the biggest schools in the state. Since then, McDowell’s team has won nine more state championships.
McDowell boasts a record that few coaches in any arena could match, but “boast” may not be the right
word.
More impressive than the rows of orange and blue championship banners hanging above the Southwood court is McDowell’s Christ-like manner of coaching and his profound impact on his teams, players said.
“He’s so humble,” Grant said. “He teaches us to be confident, but never cocky.”
His unassuming nature is evident in countless ways. His team travels in standard school buses, not charters.
The players have no loud entry music, no wild celebrations. In the locker room, the team shares in prayer, and on the sidelines, McDowell stands in sharp contrast to his opposing coaches.
“Steve doesn’t scream or lose his cool. He treats his players with respect,” Southwood Principal Ken Wood said. “All he has to do is whistle and you see five heads snap to attention, a testament to their respect for him.”
McDowell explained his style of coaching in terms parallel to the Golden Rule. “I wouldn’t want to be yelled at, so I don’t yell at them,” he said. “It’s a misconception among a lot of coaches that you’ve got to shout.
It’s not necessary. I’ve found that you get a lot out of young ladies if you treat them with respect. Yelling has the opposite effect.”
McDowell has helped dozens of players go on to success at the collegiate level, including current Texas A&M player Morenike Atunrase and former Duke standout and current WNBA star Alana Beard. But more often than not, McDowell’s teams succeed because of teamwork, dedication and sacrifice, said senior Raiyawna Gatlin.
“Most teams have that one player who does most of the scoring, but with ours, everybody plays a role,” said Gatlin, who was named Most Valuable Player of the 2008 finals.
McDowell is consistent in deflecting attention, giving credit to others and downplaying his success.
“God has blessed me with great girls to work with. The expectations are high, but I don’t talk about championships,” he said. “My goals are for my players to be the best they can be, to act like young ladies, to excel in the classroom, and to represent the school well.”
Others aren’t as reserved in their praise.
“I can’t think of a finer person to coach a student,” Wood said. “I just can’t.”
Robert Smith and Steve Baker, elders of the Southern Hills church, credit the coach for his example.
McDowell and his wife, Teresa, are active members of the church, where they attend with children Maggie and Matthew.
“It’s hard to imagine Christ coaching ladies basketball, but if he did, it would have to look a lot like Steve at Southwood,” Smith said.
They see only one downside to his approach. “In part, his humility is why he’s gotten so little press. He never lets it be about him,” Baker said.
To opposing teams, Southwood seems like a championship factory. To McDowell and his players, it’s all about family.
“I remember in ’95 when we won (the first championship), it was a great feeling,” McDowell said, “and then the next morning I thought, ‘I’m going to miss these girls.’ It’s emotional. It’s bittersweet.”
That fondness is mutual, according to his players — and former players.
“He’s like a dad to me,” said Jennifer Maxie-Smith, a senior on the ’95 team. “As ladies, seeing what a great husband and father he is makes a world of difference. It gives hope to all of us who grew up without a father.”
JOHN HAWKINS is minister for the Southern Hills church in Shreveport, La.